Art Students Use Digital Art to Collaborate on Temporary Mural 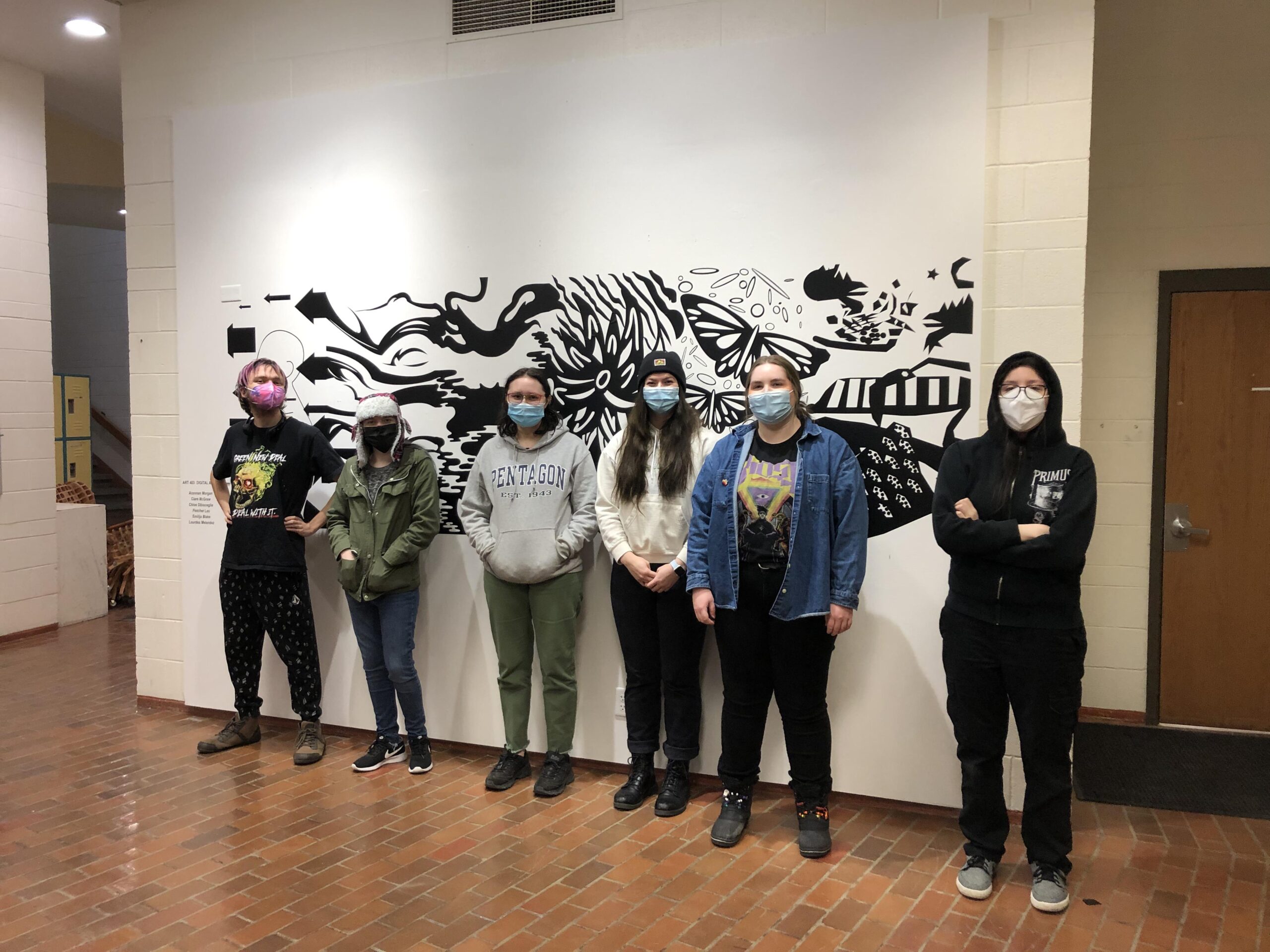 Winter quarter the Advanced Digital Art class took on the challenge of creating a collaborative installation piece of two murals where they had to not only find a way to depict their own sense of duality, light vs. dark, dystopia vs. utopia, but they also had to work together so that their pieces connected to each other’s designs, and so that they dissolved into the opposite color (black to white, white to black) 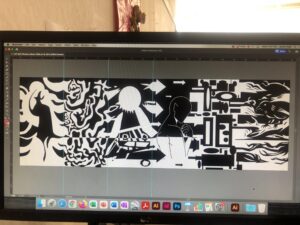 The result was two amazing pieces installed in the art building just outside of Room 116. Projects like this are a great opportunity for the students to collaborate and see their work come to life.

We had the opportunity to ask a few of the students involved some questions about the project and what they gained from the experience. 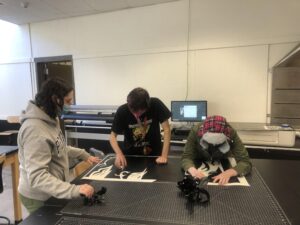 How did you feel going into this project?

Acennan Morgan: I was excited to take on this new challenge and install my work in a quasi-public setting. I did have to make a lot of adjustments initially so that it would be feasible to output physically, but now I want to do more large-scale installation projects like this in the future.

Lourdes Melendez: I was excited but nervous. I had never done a collaborative project, let alone a mural, so I was happy to try my hand at it.

Clare Mcgraw: I was initially anxious, worried that I would have difficulty with the math, but thankfully the teacher came up with two templates that we could use, and I was able to mirror one of the designs I came up with that didn’t align with the rest of the students. 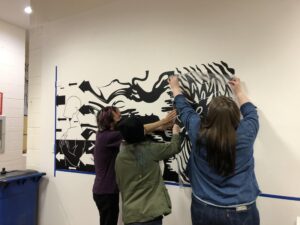 As you were working on it and collaborating, is there any challenges that you faced, and were there any aha moments?

Acennan: I think most of the challenges were in readjusting our individual designs in such a way that they could be accurately cut out. Most of us felt pretty confident about are artistic visions going into it. Actually, installing the vinyl pieces was a bit of a challenge initially, especially since we had to move our installation to a different, smaller set of walls than we had originally planned.

Lourdes: I think the biggest challenge for me was to create a design that lacked any fine details. As an aspiring comic artist, I love details, but for this project I really had to simplify my style. An aha moment for me was when I realized that less is more, and this bore fruit when I saw my design next to my fellow artist’s designs. I feel that my simplified design made the piece a lot less crowded, but also gave it some variety with a figure. I think in the future I will consider this more.

Clare: It was challenging coming up with a topic to represent the duality of the light/dark murals. I eventually settled on the same lakeside setting, but at night, with a raven on the branches. 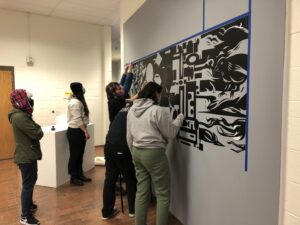 When installing the piece and putting everything together, what feelings and thoughts were going through your mind?

Acennan: I liked what I was doing, but it did take much longer than initially planned. I also developed a much deeper appreciation for Adobe Illustrator, and for vector based digital illustration in general, I had initially viewed it as nothing more than a slower version of Photoshop that keeps crashing every two seconds, now I see the true value it holds when working on a digital project with a physical output.  Peeling away the vinyl from the adhesive was weirdly satisfying.

Lourdes: I was nervous because I knew something I helped to create would be looked at by the people that walked through the art building. It was exciting. I couldn’t help but feel a sense of accomplishment. I could understand why some people would enjoy the feeling of presenting large public artworks. Something else that came through my mind was how difficult and tedious the act of actually installing the thing was. I have to say, I am not a huge fan of the installation process.

Clare: I was worried about the small pieces as they tended to get pulled off/wouldn’t stick to the wall. There were also some difficulties getting everything to line up correctly with some of the warping from the materials.

Standing back and looking at the final piece, what is something th 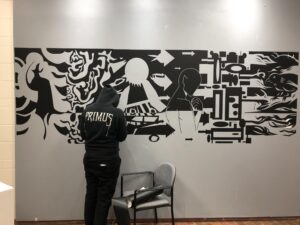 at you are going to take away from this project

Acennan: I think like most creative projects, I just need to take the physical limitations into account early on, so that I don’t have to keep readjusting my pieces.

Lourdes: That working with people isn’t that bad! Really, it isn’t! Trust me! I kind of realized that there are limitations to working solo all the time. I think collaborating makes the experience a lot more fun at the very least!

Clare: I love working on murals. I recently made one that was installed in the computer science building in the Dean’s office that I worked on all of Fall Quarter. I think my effort really shows and doing it with other people made it so much easier, given that I wasn’t responsible for designing the entire wall, just a part of it. It made me feel more connected with my fellow students in the classroom as well when we installed it together and was intrigued and impressed with their ideas. 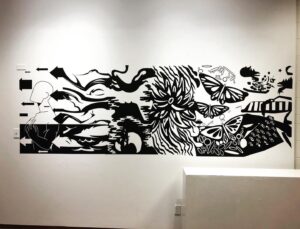