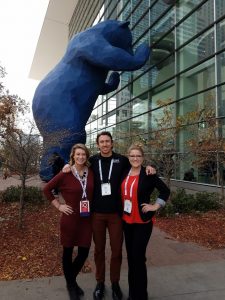 All three students are elected officers of the Masters of Public Health Association: Lauren Luther, president; Ali Norris, vice president and treasurer; and Kurtis Godfrey, secretary. The club provided funds for the trip—the first time it has been able to send its student members to a national conference.

The theme of this year’s conference was “Creating the Healthiest Nation: Ensuring the Right to Health.” 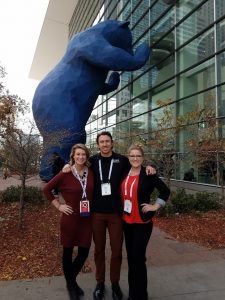 Governor John Hickenlooper of Colorado spoke about the healthy living programs in his state. President Cecile Richards of Planned Parenthood talked about the challenge of finding funding and negotiating policy. Current CDC director Tom Friedan and the last three CDC directors spoke about the Zika virus, Ebola, and AIDS/HIV epidemics, as well as the difficulties of drafting policy with Congress.

The conference also featured a career and school fair. The students spoke to personnel of the CDC, the FDA, the Army Medical Corps, C.U.R.E. International, and the U.S. Public Health Corps about future employment opportunities. They also talked to representatives of various universities that offered PhD programs in public health.

Norris, who has an interest in global health, government policy, and disaster relief, attended several panel talks that increased her passion for these topics. “The field of Public Health is making a huge difference in our country, whether or not people necessarily notice that,” Norris said.

Luther and Godfrey, whose interest lies in health education and healthcare promotion, most notably learned how healthcare positively affects specific communities and neighborhoods in the United States.

The MPHA hopes to receive more funding for future conferences next year.