Supporters Amaze and Inspire with Dean’s Dollars for Scholars

It was an amazing evening of storytelling, camaraderie, and even a little whiskey, that set a standard for generosity for the EWU Schools of Business and Professional Accounting.

Dean’s Dollars for Scholars brought together 65 alumni and friends, who donated nearly $60,000 during the Sept. 28 fundraiser. The funds raised by this generous group will provide half-tuition scholarships for 16 students who are working their way through college.

The event, held at Dry Fly Distilling, was organized by the School of Business Advisory Board, led by Jim DeWalt, president and CEO of Associated Industries. Although the event was only the second major fundraiser of its kind for the department, its success likely inspired an annual tradition.

The group purchased a barrel of port finished wheat whiskey from Dry Fly Distilling and created 240 commemorative bottles to thank scholarship supporters. Each bottle was tagged with an artistic depiction of an eagle’s journey – an original design created by Seth Collier, a senior specializing in digital art.

Collier, a Southern California native, was asked to create a piece that conveyed gratitude to the dedicated people who support scholarships for the business and accounting students. He took the design to the next level. 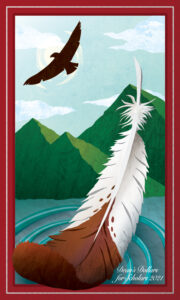 “I wanted to create a design that both symbolized their contribution and celebrated the development of the students who received the scholarships,” explains Collier.

“The feather becomes a symbol of growth that stays behind while the eagle goes off to bigger and better things,” Collier says, “and that seemed like a good way to express the sentiment behind the project.”

Scholarships were the unifying theme of the evening and guests were moved by the story of Nick Peyton, an Eastern alumnus. Peyton shared that as a high school senior who’d been accepted to Eastern, he was devastated to learn the family’s resources had been drained and his college fund was gone.

Eastern staff and scholarship supporters stepped up to help. Peyton realized his dream of earning a degree in 2004 and, to this day, gives back through his work as senior director of development for Washington State Opportunity Scholarship and his service as vice chair for the EWU School of Business Advisory Board.