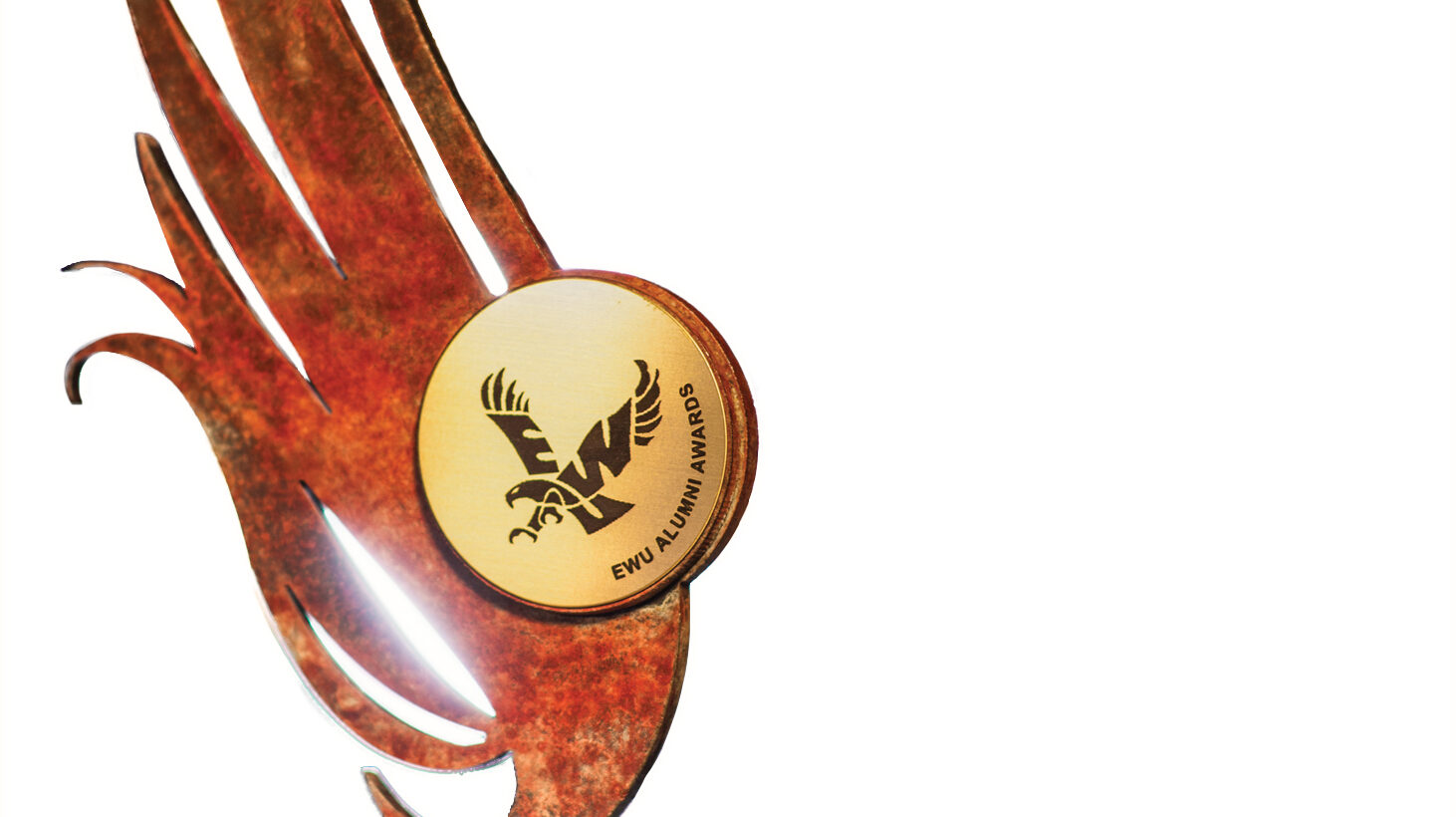 Rick Romero ’78, ’93, a former associated vice president of business services at EWU and director of strategic planning for the city of Spokane, was the EWU Alumni Association’s 2020 Lifetime Achievement honoree. During his tenure with the city, Romero, who retired in 2019, was credited for his “innovative, transformational” leadership, including his development of Spokane’s Integrated Clean Water Plan, a visionary approach to storm and wastewater management. Throughout his 28 years at Eastern, Romero was a passionate advocate for students, playing a leading role in advancing projects, such as the construction of the new University Recreation Center, that greatly improved the quality and desirability of campus life. Perhaps most consequentially, Romero’s leadership helped Eastern develop new enrollment and retention strategies that helped the university assert its continued viability at a time when some state and local leaders were floating the idea of a merger with Washington State University.

I cannot think of another citizen who demonstrates the mission, vision and values of EWU every day better than Rick Romero… He has made a profound and significant contribution to the economic and social vitality of not only our region but to every person he has worked with along the way.

Scott Glabb ’85, is an educator, mentor, wrestling coach and author. His long service in the Santa Ana (California) Unified School District has demonstrated his “110 percent commitment to changing lives and making a difference” for his most vulnerable pupils. Glabb, a former varsity wrestler at EWU, joined Santa Ana High School as the head wrestling coach and an English teacher in 1990. From the beginning, he recognized that, both on the mat and in the classroom, many of his students faced daunting obstacles to academic and personal success: poverty, homelessness, unplanned pregnancy, lack of documentation and mental-health challenges. An early proponent for girls wrestling, Glabb was among the first coaches in Southern California to start a girls-only wrestling program. His 2010 book, A Saint in the City: True Stories of Champions Living in the Barrio, chronicles inspiring stories of achievement among his students. It is now in its second edition.

With unwavering courage, personal sacrifice and determination, Scott can reach seemingly unreachable kids. Using wrestling as his vehicle for change, he provides tough love to teach these kids that they not only matter, they can also find their place in the world and achieve their dreams.

Audra Stillions ’13, ’16, a marriage and family readjustment counselor for the Spokane Vet Center, has been described as a “shining star” for veterans, their families and the entire community of former service members. Though she has served at the Vet Center for less than five years, this year’s Inspirational Young Alum winner has had an enormous impact. In addition to assisting combat veterans, military sexual trauma survivors, and veteran family members through her often dauntingly hefty counseling caseload, Stillions has built a robust counseling internship program, worked with federal and state agencies to expand marriage and family counseling options, and helped bring both equine therapy and Native American spiritual sweat therapeutics to veterans in need. In addition, outside of work, Stillions volunteers her time and expertise to organizations that train service animals. Stillions efforts were recognized by former secretary of the U.S. Department of Veterans Affairs, Robert Wilkie, who in 2018 awarded her an outstanding employee citation and a coveted VA challenge coin.

Her influence and reach has extended beyond the Spokane area and across state lines to include 34 counties in four states.
— Eliseo Dumlao
U.S. Department of Veterans Affairs

Scott West ’76 a former standout EWU ROTC cadet and varsity wrestler who rose to the rank of major general in the U.S. Army, is the 2020 honoree for Exceptional Military Service. West, who retired in 2010 after more than 30 years of service, held key leadership positions throughout his career. Among the most notable of these included terms as 48th Quartermaster General of the Army and Commanding General of the 21st Theater Support Command, the Army’s lead organization for “operational sustainment” in Europe. An expert logistician, West received numerous awards and citations for managing materials and leading soldiers in what is often called the “most critical field in the military.” Among his honors are the Distinguished Service Medal, the Defense Superior Service Medal, the Legion of Merit and a Bronze Star. West has also distinguished himself in humanitarian causes closer to home, including his leadership in providing desperately needed disaster relief to Central American families devastated by the destruction of Hurricane Mitch in 1998.

Not only is Major General West’s military career noteworthy, but his time at Eastern and in ROTC assisted all of us who continued in the program our junior and senior year. [His] leadership, integrity, responsibility and duty made us better officers being prepared for active duty.

During the workweek, Randy Casto ’91, the 2020 Eagle4Life Spirit award winner, serves as a private banking relationship manager with Washington Trust Bank in Spokane. But on football gamedays — both at home in Cheney and at most Big Sky Conference venues — Casto is celebrated for an entirely different form of labor: operator of the Game Day Bus. That vehicle, an 80s era school bus rebranded in Eagle red and white, has over the years become a fixture for fans. “It’s now an Eagle institution,” Casto told The Spokesman-Review a few years back. “People have so many great memories of it over the years.”

Randy’s Game Day Bus can be found at every EWU football game within a 500-mile radius. His open invitation to fans and foes alike is reflective of the wonderful EWU spirit that we as alumni should all strive to follow.”
— Callen Young
Washington Trust Bank