As the twin crises of the First World War and the Spanish Flu pandemic finally loosened their grip on a weary America, the nation’s college campuses saw a surge in interest and enrollment. Eastern, then the Cheney Normal School, was no exception. In the years before the war, a first dormitory, Monroe Hall, had been constructed to provide a campus home for the (mostly) women who attended the school. 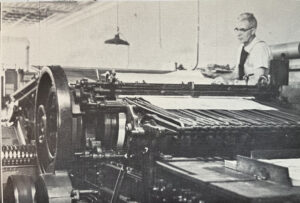 By 1919, it was clear another dorm was needed. A still unfinished Senior Hall, pictured left several years after its completion, was dedicated in July 1920 (despite it lacking a planned third floor). “May your new home be such as to cause you to ever hold memories of it in fond remembrance,” wrote Normal School President Noah David Showalter in a celebratory telegram.

Over the past century, Senior Hall has seen several renovations, ensuring that it will never cease to create fond memories. It is today listed on the National Register of Historic Places.