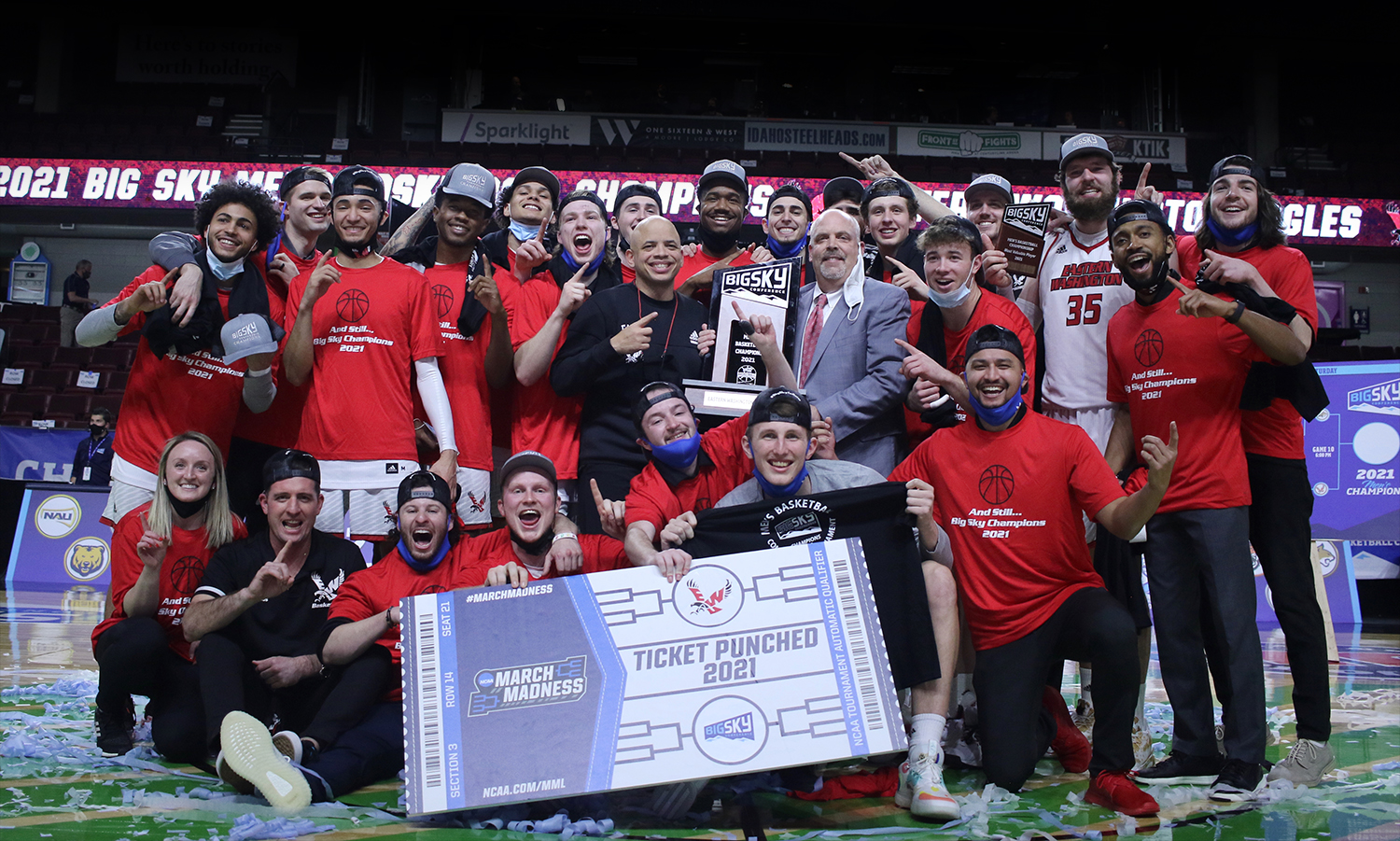 Last March, after EWU’s men’s basketball team won the Big Sky Conference regular season title, it seemed only a matter of time until the Eagles punched their ticket to their third NCAA Tournament berth. Then came the coronavirus, the Big Sky and NCAA tournament cancellations and a new reality for us all: social distancing, masks, lock-downs, sadness.

But out of the Covid-19 chaos, the Eagles emerged with renewed resiliency in 2020-21, creating moments and memories that will last a lifetime. “Flying out of there going to the NCAA tournament for the first time in my head coaching career — but for the third time in Eastern history — it was an amazing feeling,” head coach Shantay Legans said in an interview shortly before he announced his departure for the University of Portland.

The Covid-year campaign began with an original schedule offering potentially electrifying match-ups against powerhouses like the University of Southern California and Notre Dame, games intended to provide both much needed revenue guarantees for the program and once-in-a-lifetime experiences for the players.

Unfortunately, the pandemic had other ideas, and these games never materialized. Replacement contests were promptly added at Oregon, Arizona, Nevada-Las Vegas and St. Mary’s, but the virus wasn’t finished. A rescheduled match up against the WSU Cougars — relocated from Cheney to Pullman — was on, then off, then on again. Games with Montana Tech and UNLV were canceled. The Arizona and St. Mary’s games did go on as scheduled, however, with EWU providing a tantalizing preview of its potential.

In both games, the Eagles pushed their opponents to the brink but came away with losses. Still, while there may be no moral victories in basketball, there are certainly losses that put your opponents on notice.

With Covid-19 case counts exploding nationwide, conference competition got off to a rocky start in January. Five of the Eagles first six league games were canceled. When finally allowed to take the floor, the Eagles struggled to find their bearings. On January 23, as they prepared to take on Northern Colorado, they were a lackluster 3-2 in Big Sky play.

But things were about to change. EWU’s six-point road win that night seemed to transform the momentum of an uncertain season. The Eagles reeled off nine consecutive wins, including dominating victories over Montana in both home and away games.

As conference play wound down, Eastern split a pair of Reese Court contests against Idaho State that ultimately cost them a second consecutive regular-season title. But Eastern made good by putting together another four game winning streak to take the Big Sky tournament title.

As tourney champs, the Eagles earned a 14 seed in the NCAA Tournament and a match-up against the storied University of Kansas Jayhawks. That game, a spirited, gritty performance that garnered Eastern accolades from across the nation, ended in defeat. But in a year so fraught with heartbreak, it was a moment that will long be remembered as a triumph.

“We went toe-to-toe with them,” Legans told The Spokesman-Review after the game. “I tell my guys we don’t believe in moral victories, but at the end of the season this was a moral victory for our program.”

— Paul Delaney is a reporter with the Cheney Free Press. His third book, on EWU football, Taking Flight, is available now.

An Eagle Steps Up