George William Lotzenhiser, PhD, a long-time Eastern faculty member and administrator who played a key role in the academic restructuring of the institution, passed away January 26 in Spokane. He was 95.

Professor Lotzenhiser was an EWU alumnus, a former dean of the university’s Division (College) of Fine Arts, and a veteran of World War II. An accomplished musician and music teacher, he is also credited with composing the words and music for both Eastern’s fight song, “Go, Eagles, Go,” and “All Hail to Eastern Washington,” EWU’s Alma Mater 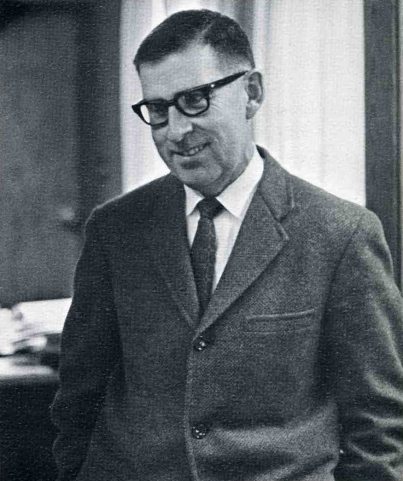 In 1960, after he had served 12 years on the music faculty at the University of Arizona, EWU asked Lotzenhiser to return to the Cheney campus to lead the music department. He accepted and quickly rose up the administrative ranks, eventually serving as the first dean of the university’s newly formed School of Fine Arts, a position he held until his retirement in 1983.

During his time on campus, he witnessed the dramatic transformation of the institution to Eastern Washington State College in 1961 and to Eastern Washington University in 1977. In 1981, Lotzenhiser received the Distinguished Alumni Award. After his retirement he was named Dean of the School of Fine Arts, emeritus, with the official observance of his status being part of the June 1983 commencement.

While pursuing his academic career, Lotzenhiser continued his military service as a U.S. Navy Reserve officer, including two years of active duty as a lieutenant commander in the early 1950s. He eventually retired after attaining the rank of Rear Admiral.

Military service also played a prominent role in his personal life. While playing trombone for a Navy dance band during WWII, Lotzenhiser, then still an enlisted man, met and fell in love with B. Kathryn Tuttle, a Navy WAVE petty officer. They married in 1944.

“BK” as Lotzenhiser affectionately referred to her, played a leadership role in many important civic organizations, and was responsible for founding the Women of Achievement Luncheon fundraiser for the Spokane YWCA. She preceded him in death in 2006.

The couple are survived by a son, Jon Call Lotzenhiser of Walnut Creek, Calif., and a granddaughter. Their eldest son, William D. Lotzenhiser, died in 1991.

Visit our website to learn more about how Lotzenhiser composed All Hail to Eastern Washington, as well as details about a 2016 Honor Flight that honored him and other veterans in Washington, D.C.