A Hall for Science 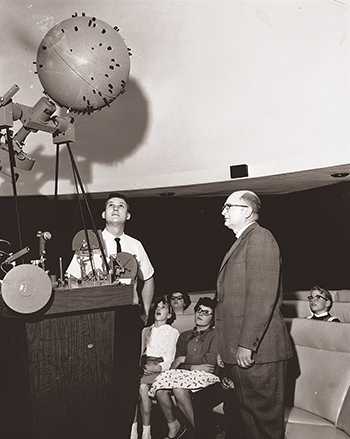 The Soviet Union’s successful launch of the Sputnik 1 satellite in 1957 didn’t just shock and embarrass the American political establishment, it led to a frantic game of superpower one-upmanship. Among the positive outcomes of the ensuing “space race” was a renewed national interest in — and greatly increased funding for — university-based science and engineering.

At Eastern, the post-Sputnik boom helped make long-considered plans for a new Hall of Sciences a reality. Begun in the fall of 1960 and completed in 1962, the building ensured that “every department, including chemistry, biology, geology, physics and natural sciences has the most up-to-date equipment,” as one contemporary account put it. Sixty years later, the Hall of Sciences, now the Science Building, is getting a long-overdue, state-funded makeover. It’s a timely remodel that will ensure this “Sputnik-era building” (see Page 11) will remain relevant, if not for another 60 years, then at least for a long stretch of what promises to be our own exciting era of discovery.