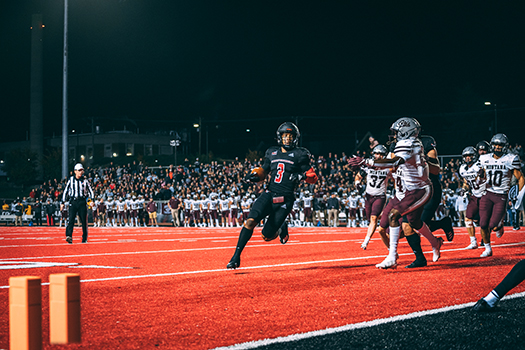 Despite the odds, Eastern’s greatest-ever quarterback is ready to quiet the next-level doubters.

Turning heads is what Eric Barriere ’21 did best on the football field at EWU.

It began during Eastern’s recruiting process, as Eagle recruiters watched him win championships as a high schooler in California. Then, upon arrival in Cheney in the fall of 2016, it was his astonishing arm strength that was on display — coaches still talk about the day his throws outdistanced the kicks of Eastern’s senior punter during an after-practice showdown.

As a sophomore in 2018, Barriere turned heads across the FCS as he took over for Eastern’s injured All-America starter Gage Gubrud at mid-season and proceeded to lead the Eagles to the NCAA Division I Championship Game in Frisco, Texas.

Along the way he continued to pile up highlight-reel plays, astonishing yardage totals and, of course, the honors that go along with such things. Barriere finished fifth in the voting for the Walter Payton Award in 2019, was runner-up for the prize in 2020 and in the fall of 2021, he won it, securing his place as the single best offensive player in the FCS.

Now the process starts all over again as Barriere, his college eligibility exhausted, looks to turn heads — plenty of which are looking askance — and secure a place in professional football. It won’t be easy. But it’s never been easy for Barriere.

As a kid growing up in Southern California, he persisted through injury, illness and a tough neighborhood to excel at pretty much anything he put his mind to. He says he’s more than confident he’ll do the same, in spite of the doubters, as a professional athlete.

“It’s something I’m used to already,” Barriere said during a phone conversation in April. For now, he is back in California, where he’s been working out since his senior season concluded in December. “I’m always trying to prove myself and out-work other people. I have to show them that I deserve a chance to play with the best. It’s another opportunity to showcase myself now at a higher stage, and show them what I can do.”

Their common message? Keep being you.

“They just told me to work hard, and that I just need one opportunity for a team to believe in me,” Barriere said in advance of the NFL Draft in late April. “I just want an opportunity, that’s all,” he says. “When I get it, I have to make the most of it. It’s all on me. I just have to put in the work, and I know I’ll be up for any of the challenges that come my way.”

Measurables is one word for what professional football analysts use in the sometimes maddeningly opaque process of projecting the value of prospects. Aaron Best, Eastern’s head coach for four of the five seasons Barriere played in the EWU program, knows getting drafted is something of a crapshoot.

“So much of it is about measurables, and I don’t know if it’s the right way to go,” Best admits. “Teams determine what their evaluation process is. The numbers are great to have, but it comes down to if you can play football.”

“He has a ton to offer,” says Best of Barriere’s NFL appeal. “His stats alone are great and some of the best the FCS has ever had. On top of that, he was a great teammate, and he continually got better from the time he took over as our starting quarterback.”

“Eric’s off day is somebody else’s greatest day, which is crazy. But that’s the standard he set for himself, this team and this university,” Best continues. “Unfortunately, it’s out of everybody’s hands once [his] eligibility is done. It’s up to others to determine if he’s a good fit for their [professional] organization, no matter what the position is.”

In Barriere’s case, the numbers were never going to be a problem: They were, in short, “ridiculous.” He finished ranked third in FCS history with 15,394 yards of total offense, 13,809 passing yards and 121 passing touchdown — all EWU and Big Sky Conference records. He’s also the school record-holder in completions, pass attempts, rushing yards by a quarterback, touchdowns and points generated. In short, he’s the Eagle quarterback G.O.A.T., a distinction he will likely not soon surrender.

In Barriere’s case, the numbers were never going to be a problem

Other than stats and film assessment, most of the measurables come from “Pro Days” hosted by schools. These events usually consist of physical testing to see exactly how players compare to others at their respective positions. Barriere was fortunate to not only take part in EWU’s Pro Day, but also one held at USC in California.

Players also participate in on-field drills. Barriere certainly turned heads at EWU’s Pro Day, where he threw the football 70 yards flat-footed. Only a handful of NFL scouts were on hand, but what they learn about a player is shared widely.

Barriere registered a head-turning 38-inch effort in the vertical jump at EWU’s Pro Day. By comparison, the best mark among quarterbacks at the NFL Scouting Combine — an event Barriere was not invited to attend — was 36 inches. His time of 4.77 seconds in the 40-yard dash wasn’t as impressive, and his measured height (5-feet, 11-inches tall) invited skepticism from scouts. Barriere was not concerned.

“I feel good about everything,” Barriere says. “I know quarterback is different than every position, so it’s going to come down to the mental aspects. I have to practice like a pro and prepare like an NFL quarterback. Those will be the key factors.”

Among the records Barriere broke at Eastern was the Big Sky career yardage record held by EWU’s Matt Nichols, who played two preseason games with the Dallas Cowboys in 2010 before playing nine seasons in the CFL from 2011-21. Nichols says he has heard it all before — the “prototype quarterback” that NFL teams are looking for: “6-feet, 4-inches tall, laser-rocket arm and from a bigger school,” he says. Without all of those assets, he adds, “You aren’t going to be drafted in the first three rounds.”

“If you don’t have those measurables, you have to have a scout or player personnel director stick their neck out for you,” Nichols says. “Because if they’re wrong, it could be their job. I think you hope there is that one guy out there who believes in you. Hopefully there is, and it’s up to you to prove it.”

Best is hopeful that Eastern’s ability to produce players for the NFL could help Barriere along the way. “I don’t think it hurts. I think a lot of people (in professional football) understand who we are, what we are about and the players we have. But at the end of the day it’s not who came before you, it’s what you do in the moment. He’s played with professionals like Coop [Cooper Kupp], so he can take his notes and apply them moving forward.”

But Best stops short of saying success for FCS players, such as the extraordinary path to greatness by Kupp, gives them equal footing with FBS opponents. That same old adage, “played at a lower level of competition,” as CBS Sports said of Barriere, is rearing its head again. And it makes it hard to turn heads if you don’t get the opportunity.

“To me, there is no downside at all,” Best says of Barriere’s FCS experience. “Can you play, and can you play at a high level? The logos on the sides of the helmet are sometimes taken into too much consideration.”

In advance of the NFL draft in April, assessments of Barriere’s chances — from draft watchers in the media at least — were mixed. Most of the independent quarterback rankings had Barriere as an “outside looking in” guy, although he was listed as No. 8 by SI.com and No. 10 by profootballnetwork.com.

On the positive side, some draft observers described him as a “dual-threat, elite-level athlete,” and used terms such as “creativity, mobility, vision” and “stands tall in the pocket” to describe his game. CBS Sports in particular had positive things to say: “Good top end speed. Quick release made possible with a flick of the wrist. Gets the ball out quickly. Generates a lot of strength off platform. Good deep ball accuracy. Can drive the ball.”

Still, there were doubters. Words like “unorthodox,” and phrases like “lesser-known profile,” “decision-making,” and “durability,” were used to express concerns about Barriere’s NFL worthiness. Again, CBS had these things to say: “Undersized in terms of height and weight. Does not follow through in his throwing motion. Does not sell fakes well. Late to feel pressure, poor pocket presence. Balance is an issue. Played at a lower level of competition.”

In all, it added up to Barriere likely being considered a “developmental prospect,” a player whose chances at signing a free-agent contract with a NFL team were greater than were his chances for being selected. And that’s pretty much the way things played out over the three-day draft. Names came and went, but Barriere’s phone didn’t ring.

A little later, however, he did get a call. The Denver Broncos, the former AFC powerhouse whose recent quarterbacking woes led to their poaching Russell Wilson from Seattle, invited Barriere to rookie minicamp in May.

Even if the NFL doesn’t pan out, the two-time Big Sky Offensive Player of the Year would almost certainly get an opportunity in the Canadian Football League, where a larger playing field and fewer downs would be advantageous for Barriere’s strong arm and accuracy.

As of now, the Winnipeg Blue Bombers own his rights, and Barriere could continue the successful pipeline of former EWU quarterbacks into the CFL, starting with Rick Worman in the 1980s and continuing with recent stars Bo Levi Mitchell, Vernon Adams Jr. and Nichols.

“Hopefully he gets the opportunity to get on an NFL roster and play in some preseason games,” says Nichols, who has played in the CFL for Edmonton, Winnipeg and Ottawa.

“Obviously, I think the CFL is incredible and is a great brand of football,” he continued. “He should set his sights on the NFL for as long as he can, but I think there is a big future for him in the CFL — especially with the equity EWU has in the league. I think he could go up there and be great.”

Barriere appreciates the backup plan. But he wonders, alongside his coach and so many Eastern supporters, why EWU quarterbacks have so often been bypassed by the NFL: “I don’t get it,” he says. “I don’t know why they end up in the CFL.”

Barriere’s springtime training sojourn took place under the direction of his player representative agency, ELITE Athlete Management. “Throughout the process,” Barriere said, “I’ve had to learn how to work out different parts of my body, and treat it a little bit better than I was doing in college. They are making sure I can be 100 percent and make sure I don’t overdo anything.”

For his part, Coach Best remains confident that what Barriere showed the world while at EWU, he’ll show again at the next level.

“Eric checks every single box and then some,” Best says. “Throw it all aside, your eyes aren’t going to fool you. He’s done what he can do plus a lot more in his time here. There are so many things outside of the statistics that he’s improved and has shown his capabilities. He just needs a legitimate opportunity.” [Editor’s note: As Eastern magazine went to press, Barriere announced he had signed a contract with the Michigan Panthers of the United States Football League. The move does not preclude a future deal with either an NFL or CFL team.]