George Frederickson, the revered former president of Eastern Washington University who led dramatic advancements in academics, athletics and fundraising, died on July 24 in Lawrence, Kansas. He was 86. 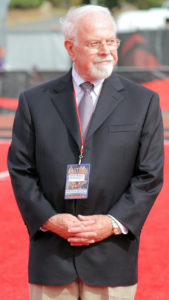 Over the university’s long history, few individuals have had a greater impact than Frederickson. During his decade-long tenure, he was instrumental in transitioning Eastern Washington State College into the thriving regional university today known as Eastern Washington University. He helped create the university’s schools of health sciences, public affairs, and mathematical sciences and technology. And because he saw a need for a fundraising vehicle to help Eastern students succeed long into the future, Frederickson also helped establish the EWU Foundation.

Frederickson was by all accounts a dynamic leader, one whose vision for what Eastern could become sometimes clashed with those reluctant to embrace change. Among his more controversial moves was one that generated perhaps his most high-profile success — transitioning EWU Athletics from membership in the NAIA to the NCAA and the Big Sky Conference. Frederickson left EWU in 1987 to become the Edwin O. Steen Distinguished Professor of Public Administration at the University of Kansas, but made a point of attending the 2010 FCS National Championship Game, where he cheered his beloved Eagles on to victory.

Frederickson was unable to watch the Eagles face North Dakota State in their return to the national championship game. “I don’t drive anymore, and my wife doesn’t see very well,” Frederickson told Cheney Free Press and Eastern magazine writer Paul Delaney at the time. But, he added, “I think that it’s been a blessing to me to live long enough to see some of the results of our hard work.”

Filed Under: Campus In Memoriam Sports