An Eastern Kind of Person

He was an Eastern person through and through. He graduated from Eastern. He worked at Eastern. He lived its history and enjoyed every minute of it. Perhaps no one knew more, or cared more, about the university’s legacy than Charles V. Mutschler, PhD, who died in an auto accident on March 11. He was 63. 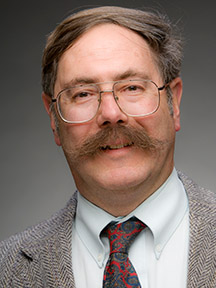 Charlie, as his friends and colleagues fondly referred to him, was polite, helpful, genuine and unique. “A kind soul,” is a common descriptor. Here in Eastern’s Office of Marketing and Communication, publisher of this magazine, he often worked with us to make sure we got our facts straight when writing about bygone professors, past administrators, important anniversaries and historical buildings.

Most recently, Mutschler served as a professor of history and the interim dean of EWU Libraries. A true historian, he loved the library, and his main role as university archivist only fueled his passion.

“I’m going to miss my friend,” said Library Faculty Chair Justin Otto as he paid tribute to Mutschler while speaking to television reporters on the Cheney campus. “He believed in Eastern. He was proud of Eastern. So I think the way we can honor him is by continuing to be a good library that supports Eastern’s students.”

Born in Albuquerque, New Mexico, Mutschler came to EWU as a freshman in 1973 earning a bachelor’s degree in history four years later. Later he completed two master of arts degrees. The first, also in history, was from Eastern in 1981. A second, in archives and records management, was from Western Washington University. He added a doctorate in history from Washington State University in 1999.

Mutschler began his Eastern career in 1978. He was promoted to archival assistant in the EWU and the Washington State Archives in 1983, and became University Archivist in 2001. In 2012 he achieved the rank of professor.

Jay Rea, University Archivist Emeritus, mentored and encouraged Mutschler as he pursued his education and training. “When he set out to do something, he did it well. He’s that kind of person,” says Rae.

On campus, Mutschler worked tirelessly to make better use of digital technology so that students, faculty and staff might have greater access to publications and materials. He told stories, shared history, led walking tours of EWU’s historic district, listened to the concerns of students and just made people smile.

Off campus, Mutschler served as chair of the Cheney Historic Preservation Commission, and was widely known and respected for his deep knowledge of, and love for, all things related to railroads, including railroad history, photography and modeling. He was also active at Emmanuel Lutheran Church in Cheney, where he often used his snow blower to clear walkways after a storm.