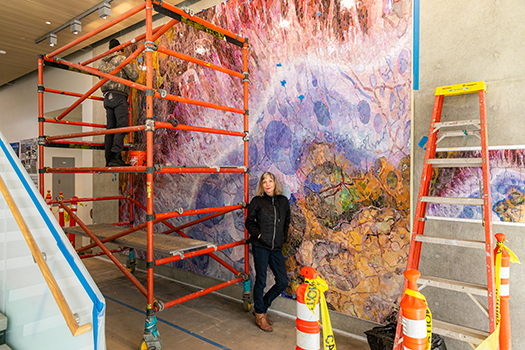 Among the most striking of these decorative touches is a colorful, two-panel “mosaic mural” of glazed glass by Texas-based artist Dixie Friend Gay.

Friend Gay, whose public art inhabits spaces across the nation, says the twin mosaics, titled “Expanding and Collapsing,” are abstract designs “inspired by the inside of a geode, the strata of folding earth, mapping and cells. The smaller, upper mural echoes the lower one, giving an impression of reflection, inverting the colors, playing with the light quality.”

The murals were selected by a faculty committee and funded by the state of Washington through its Art in Public Places program. They were mounted earlier this year in the open atrium area of the ISC, where the works were spaced to bisect two floors. Members of the public can visit them during the ISC’s regular hours.

“Having this art here brings so much life to the language of this building,” says selection committee member David Bowman, dean of EWU’s College of STEM. “Everyone will see themselves reflected in it somewhere.”