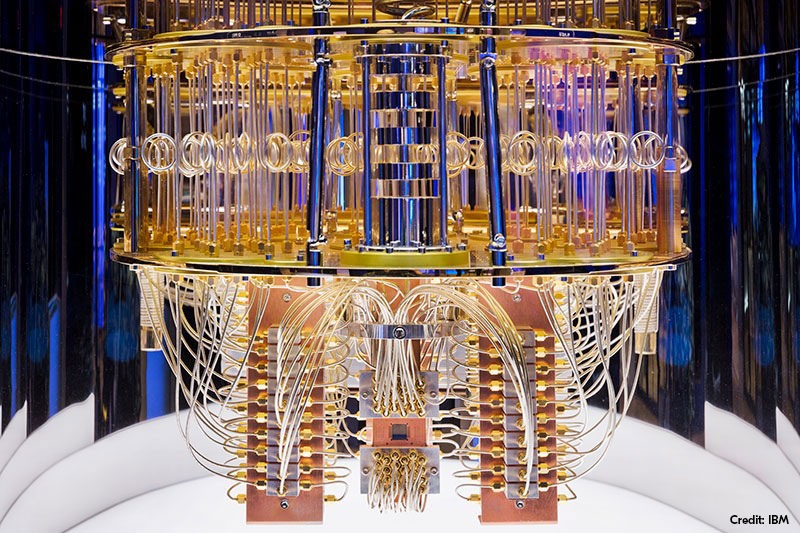 Along with his students, an EWU chemist takes his place among the quantum vanguard.

Few recent scientific developments are as promising to contemplate, or as maddeningly difficult to comprehend, as quantum computing — a process in which the 1s and 0s of traditional digital processing are replaced with the exponentially more capable quantum bits, or “qubits.” Suffice it to say that, thanks to the work of a select group of international scientists, quantum applications represent a potentially game-changing breakthrough in data processing and storage.

Count EWU’s Jamie Manson, a professor of chemistry, as a member of the quantum cognoscenti. His ongoing work, funded by a newly renewed, three-year grant of more than $395,000 from the National Science Foundation, is helping to create the underpinnings for future quantum computing applications.

Manson’s contribution involves designing, building and testing molecular-level structures or “lattices” that host the electron arrangements he studies. Chief among these are “skyrmions,” intriguing but little understood phenomena first identified by the British scientist Tony Skyrme in the early 1960s.

“Skyrmions are a new class of spin textures or topologies wherein the electrons can adopt particular alignments that can be easily switched using external stimuli such as magnetic or electric fields,” Manson says. “This switching behavior is ideal for applications such as computing, memory storage and other device technologies.”

The NSF grant, for which Manson in the sole principal investigator, is his fourth consecutively funded project from the agency. It will allow him to not only continue his own work, but will also fund participation of a number of Eastern undergraduate researchers; students whose daily activities will mostly be centered around tasks in chemical synthesis, optical spectroscopy and X-ray diffraction. “Over the coming year,” he says, “I plan to attract at least six students to work on the project.”

Manson’s work with students was of particular interest to proposal evaluators at NSF’s Division of Materials Research. “EWU students have ample opportunities to participate in experiments; meet and interact with collaborators; assist in data analysis and prepare manuscripts for publication; help shape future research directions; and present their results at conferences and workshops,” the award abstract reads. “For this project, Professor Manson has established a diverse undergraduate research group that consists mostly of women, a group largely underrepresented in STEM.”

Manson says an added benefit for students includes the likelihood of their working with him and other scientists at some of the nation’s most advanced research facilities.