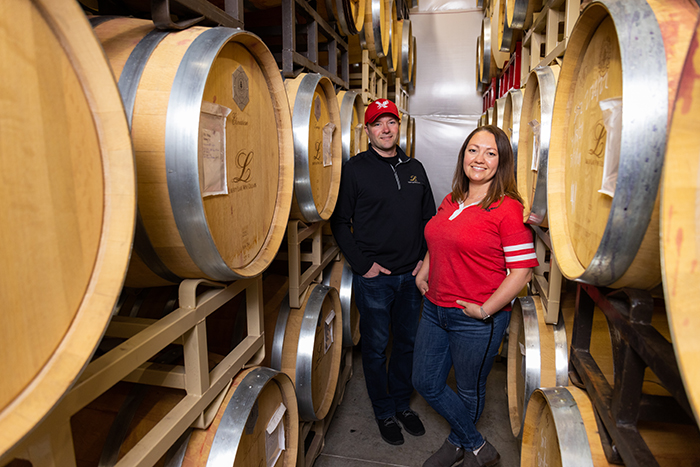 For most aspiring winemakers, the path to producing award-winning wines begins with internships, apprenticeships or maybe a degree in oenology. For Mark ’00, ’02, ’08 and Sarah Lathrop ’08, the husband and wife owners of Liberty Lake Cellars, it began in the business program at Eastern, where they became a couple while pursuing master’s degrees.

Even while still in school, the two often spent date nights at wine tastings. One of their favorite venues was Liberty Lake, where Eastern alumnus Doug Smith ’75 made big red wines from Washington’s Red Mountain AVA. When Smith and his wife, Shelly, failed to produce a 2015 vintage, the Lathrops asked why. The Smiths said they were calling it quits.

Good business people that they are, the Lathrops sensed an opportunity. When Doug Smith said he’d stay on for a year to help, Sarah and Mark became owners and winemakers, even while keeping their day jobs in finance.

Sarah admits to some naivete about what was involved. “We went into it thinking: ‘I don’t know, we like wine! How can we fail?’” she says with a laugh.

How indeed. Mark, who handles most of the winemaking duties, says his training was all informal, though he did have the benefit of some of Smith’s old class materials from the winemaking program at Washington State. Turns out he didn’t need much more. Among the very first wines he and Sarah produced was a Syrah that scored 92 points in Wine Spectator magazine.

More success followed. Still working with fruit from Red Mountain, the Lathrop’s 2018 vintage was a particular triumph. At the invitation-only Great Northwest Wine Platinum Awards this year, all seven of their entries earned platinum status — a first for the 23-year-old event. Liberty Lake Cellars was also named 2022’s “Washington Winery to Watch,” another first for a Spokane-based producer.

The Lathrops, gratified as they are by the recognition, are quick to share credit with what they describe as the region’s “incredibly welcoming” winemakers.

“The winemaking community is just so open and helpful to each other,” says Mark. “It’s been a pretty great community to join.”