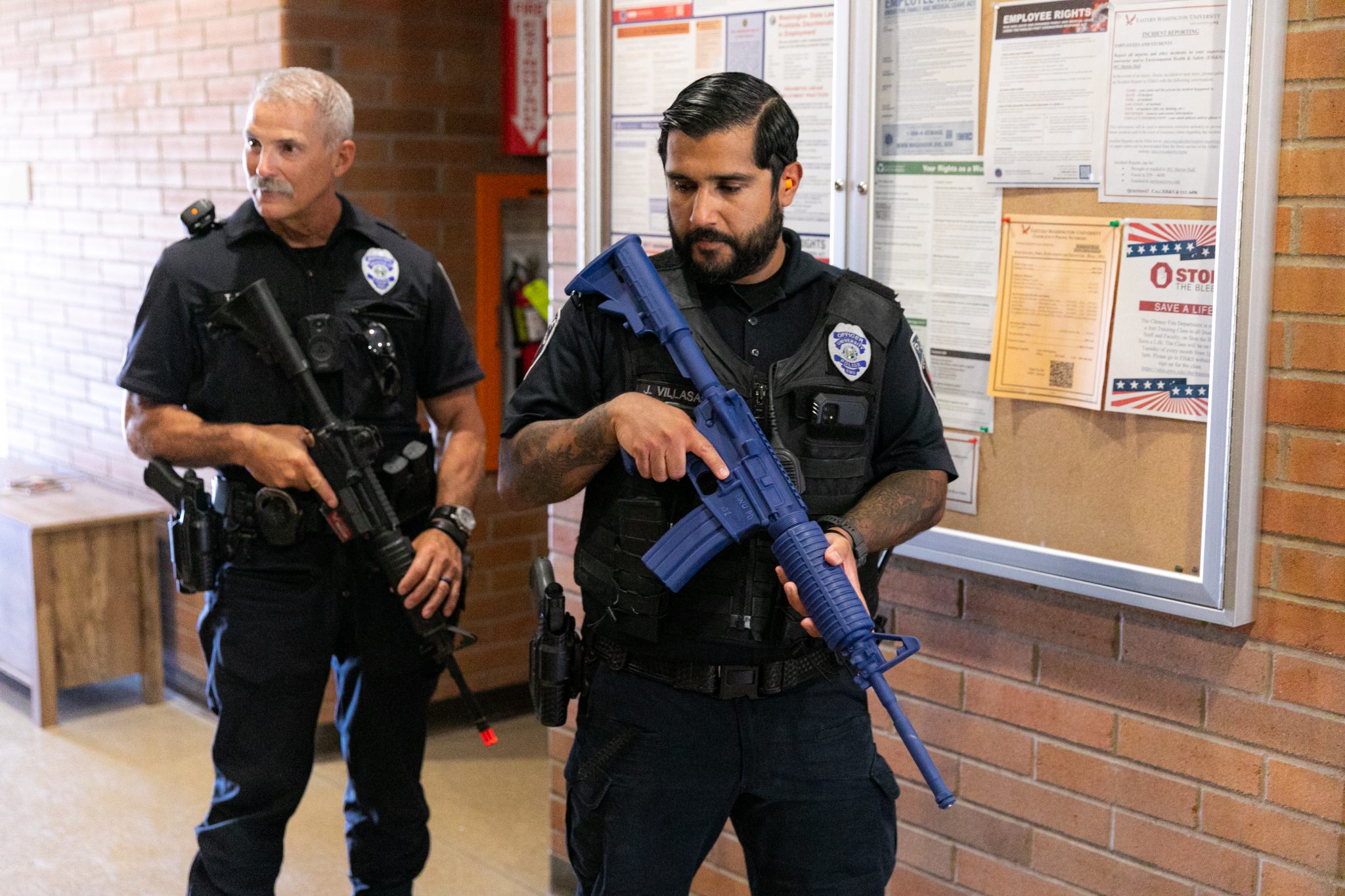 On a scorchingly hot day this summer, University Police  —  drenched in sweat beneath full tactical gear  —  cautiously but deliberately advanced through the narrow stairwells and tight corridors of EWU’s Morrison Hall. Thankfully, this hyper-realistic hunt for an active shooter was purely instructional.

Led by Sgt. Nick Bickley, firearms and armor instructor, and Officer Greg Karlis, defense tactics instructor, the “incident response” exercise was one of many forms of training that Eastern’s finest use to keep students safe.

During this summer’s training event, the men and women in blue did their work while outfitted in bullet proof vests weighing 30-plus pounds. As they moved through the decommissioned dormitory, the air, stifling and still, weighed heavy. The lack of air conditioning was intentional — battling back against heat, exhaustion and adrenaline overload is often part of the challenge when responding to life-threatening situations.

“We train to address the threat,” says Jewell Day, the university’s chief of police, adding that the officers not only learn to persevere in tough conditions, they gain the skills and confidence it takes to advance on their own without having to wait for the team.

Because of the pandemic, this is the first time that those officers have gone through active shooter training. “We wanted to make sure we are all operating from the same baseline,” Day says.

That team, says Day, includes 13 officers who train throughout the year, typically going through every building on campus to become familiar with its layout. This summer’s training was designed to build foundational skills. Revisiting these skills was particularly important in the wake of Covid-19, which put a halt to these annual training exercises.

Additionally, the department has added five new employees over the past two years. Because of the pandemic, this is the first time that those officers have gone through active shooter training. “We wanted to make sure we are all operating from the same baseline,” Day says.

Unfortunately, “active shooter” emergencies are not uncommon. University campuses, while typically among the nation’s very safest of places, have in the past been targeted.

Day says that the department has trained for such threats for the entire 15 years he has been with the force. When, for example, the state of Washington implemented new use-of-force requirements for officers last year, the department was already following those procedures. “It’s not something that’s new to us. It’s just who we are,” Day says.