For the Love of Lichen 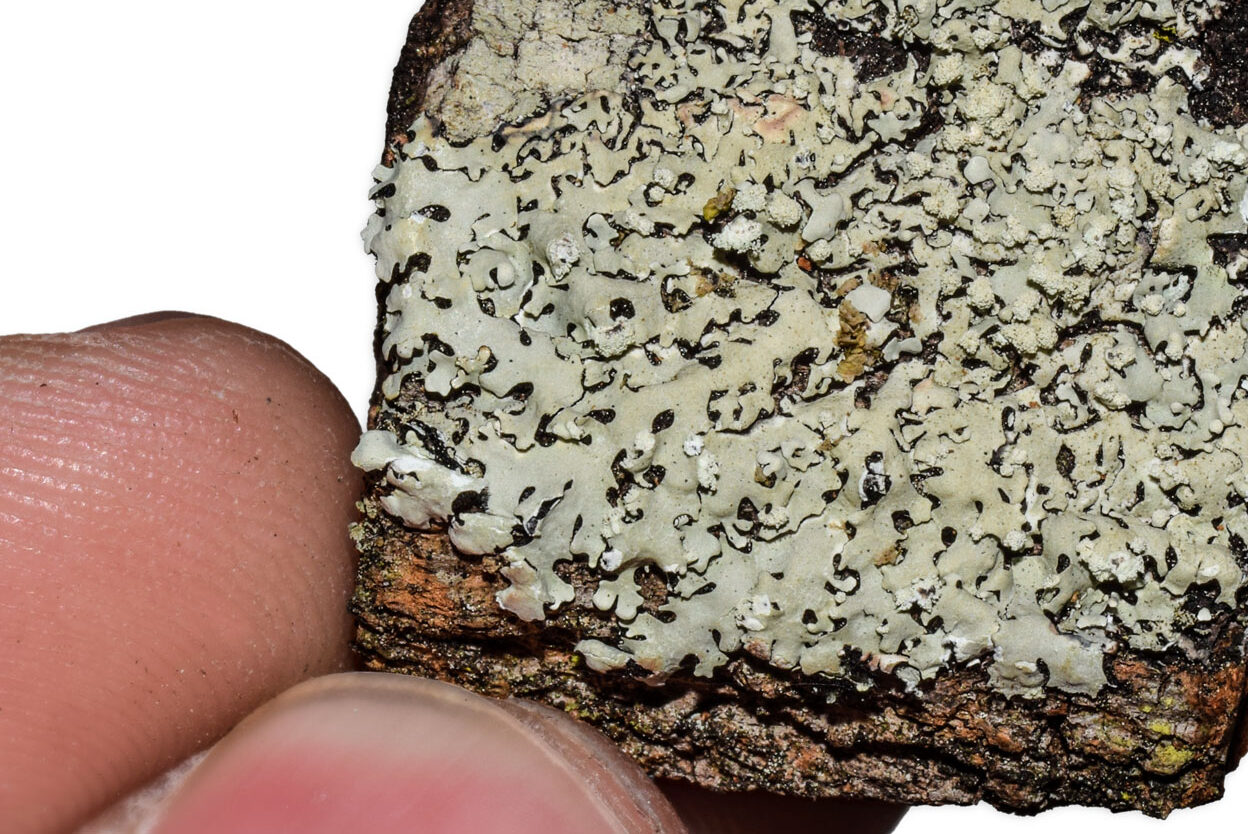 Thanks to an intrepid Eastern researcher, an ‘odd organism’ gets its turn in the spotlight.

She is a renowned star of stage and screen, a media mogul and philanthropist. It is a previously unidentified “symbiotic organism formed by close cooperation between a fungus and an alga.” Now, thanks in part to an EWU biologist, that organism—a lichen—and the voluble celebrity—Oprah Winfrey—will be forever linked, at least in the annals of lichenized-fungi taxonomy.

Earlier this year, Jessica Allen, a lichenologist and assistant professor of biology at EWU, and James Lendemer, an assistant curator at the New York Botanical Garden, found themselves puzzling over an unfamiliar lichen found growing on tree bark in rural Alabama. The leafy, jigsaw-puzzle-like “foliose” lichen, so called because of those leaf-like lobes, didn’t quite fit the characteristics of any known species. Back in the lab, chemical analysis showed a distinct profile, while an examination with ultraviolet light yielded a bright-yellow glow that further confirmed its uniqueness. 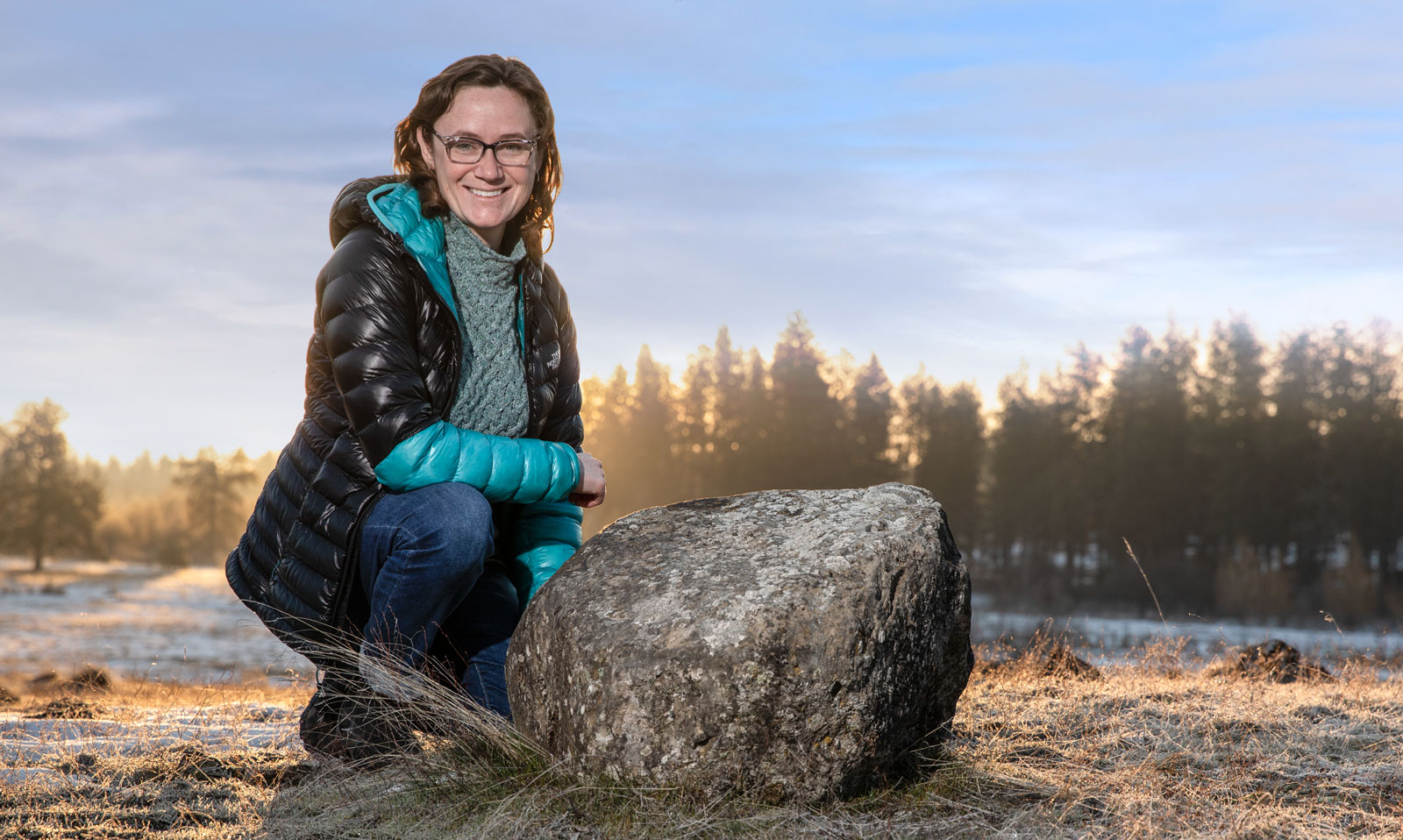 When it comes to the few dozen new lichens identified each year, naming rights belong to the discoverers. Because this glowing member of the genus Hypotrachyna was found near Koscuisko, home town to—you guessed it—Oprah, Allen and Lendemer called it “Oprah’s sunshine,” or, as it will be known in the trade, Hypotrachyna oprah.

H. oprah joins the roughly 20,000 lichen species already identified. There are plenty more waiting to be discovered; botanists estimate that only five percent of the world’s fungi have been fully documented.

Researchers such as Allen and Lendemer are determined to lessen that deficit, a task motivated in part by scientists’ growing awareness that lichens, always a crucial environmental player, are now emerging as an important “bio-indicator” of our planet’s overall health.

“Even though they are really small, lichens are actually important pieces of the whole, overarching ecosystem,” says Allen. They are habitats for tiny invertebrates, she says, like water bears, nematodes and small worms. Insects use them for camouflage and for food. Slugs and snails also eat them, as do larger, more charismatic creatures such as deer — who depend on lichens for winter forage — as well as caribou and bighorn sheep that eat them year-round. Because lichens don’t hold water and naturally produce antibiotic and anti-bacterial compounds, numerous bird species use them for nesting materials.”

“As far as humans go,” Allen adds, “most lichens are really sensitive to the same air pollutants that cause health problems, so we use them for large-scale air quality monitoring worldwide.”

This wasn’t the first time Allen and her research partner linked a new lichen to an A-List personality. “James and I named a species after Dolly Parton, I think, three years ago. So this was the second in our series of Southeastern lichen celebrities,” she says with a laugh.

Allen, who earned a bachelor’s degree from Eastern before completing a doctorate at the City University of New York, gets why some might think linking Dolly and Oprah to lichens is simply a ploy to capture the attention of, well, media organizations like this one. But there’s nothing frivolous about it, she says.

“Some people feel really strongly that you should give species’ names that describe what they look like, only in Latin,” says Allen. “Our purpose was to honor two women who have accomplished some incredible things in their lives, women who are really strong philanthropists. It’s also because there are just very few species named after women. We’re honoring them for their work, but also highlighting this gap that we see in our nomenclature.”

Make no mistake, she continues, lichen nomenclature is a serious business. “The name sticks with the organism, basically, forever,” she says. “You can change the genus, change how it’s organized evolutionarily, change how it fits with our overall knowledge of how it and other species are related to one another. But unless someone demonstrates a flaw in the identification, that second name, Oprah, is stuck to it.”

Allen does concede, however, that she and Lendemer aren’t averse to using the glow of celebrity to give lichens a bit of a PR boost. On this score there is much work to be done.

In an otherwise informative webpage, for example, the U.S. Forest Service admits up front that “not many people know what lichens are, and who would? They seem as though they are from another planet!”

Lichens are indeed odd organisms. Neither entirely fungus or algae, they exist in what biologists call a “mutualistic relationship” between the two. Lichens typically consist of a thallus — the vegetative body produced by the fungus — and a photosynthetic agent that feeds it, either algae or cyanobacteria (a bacterium sometimes mistakenly referred to as “blue-green algae”). Unlike plants, they do not have roots, stems or leaves.

Lichens grow very slowly, reproducing in both sexual and non-sexual ways. They need only air and rain to sustain themselves, and, also unlike plants, can shut down completely to survive long-exposures to drought and other extreme conditions.

Lichen-friendly substrates — the surfaces on which lichens grow — can be found all over, from mountain peaks to coastal marshes, from scalding savannahs to freezing tundra. One lichen, Xanthoria elegans, even survived outside the International Space Station. But lichens seem happiest in warm places where there is plenty of water, air, nutrients and light.

The rural Southeast is one of those places, which explains in part why Allen and Lendemer spend so much time trudging through the backyards of southerners like Dolly Parton and Oprah Winfrey.

The discovery of H. oprah happened, for example, while the two scientists were participating in the lichen-collecting workshop near the Alabama/Mississippi border, about 50 miles from Winfrey’s birthplace. The area is a classic biodiversity hotspot, home to astonishing range of plants, animals and, of course, lichens.

“It’s the last tailings of the Appalachian Mountains spilling down into the coastal plain of the Southeast,” says Allen. “Deciduous trees, mixed deciduous forests, really high tree diversity, pretty dense understory. It’s basically, but not quite, subtropical. Really wet, lots of rain. A tropical influence without quite being subtropical.”

Lichen hunts are decidedly low-tech: pinpoint a promising spot and start collecting. “We use wood chisels to pry them off wood, rock chisels to collect on rocks, clippers for lichens on limbs — these things are usually growing on trees, or on rocks or on the soil,” Allen says, noting that she and Lendemer often attract the attention of curious, if standoffish, locals.

“We end up with whole pillow cases stuffed full of lichens – we look crazy, right? Most of the time they will give you a look, but they never say anything.”

The researchers typically don’t discriminate among lichens in the field, instead taking samples from pretty much every species they see. The reason, Allen says, is two-fold. One, it’s easy to mistake one lichen for another. H. oprah, for example, was likely confused with H. osseoalba, another lichen also found in the warm, wet forests of the southeastern U.S.

The other reason involves a more general need to catalog what’s out there. “We’re basically just trying to document the full diversity of species in the area, preserving them so that other scientists can study them for years, even centuries, to come,” says Allen. “We still have specimens from Darwin and earlier, some collections have samples dating back to the 1500s.”

Back out in the field, newly collected lichens are plopped into paper lunch bags, Allen says, “like you’d send with your kid to school.”

The scientists then record the lichens’ location and note their substrate. Eventually, they’ll haul them off to reside with older specimen in an herbarium, a building housing a preserved collection of plants and fungi.

“We have an herbarium here at Eastern actually,” Allen says. “This work was mostly done at the New York Botanical Garden, which is the second-largest herbarium in the world. But here at Eastern we have our own slowly growing collection housed in the Science Building.”

For specimen deserving of extra attention, like the lichen that became H. oprah, a trip to the laboratory is next. Here state-of-the-art tools come into play. Dissecting microscopes and imaging software help scientists produce a detailed description of the lichen’s physical characteristics. Analyses involving exposure to ultraviolet light — part of a process called thin-layer chromatography — helps determine how the lichen’s compounds compare to previously documented species. Sometimes the scientists take tissue for genetic testing. The process, from collecting in the field to preparing their findings for publication, can take months, even years.

Allen says the effort is more than worth it, especially for researchers like her who love both lichens and the challenge they represent. The love part began, she says, back when she was an undergraduate at EWU, where she became enthralled by lichens’ peculiar attractions.

“I still think they’re beautiful,” she says. “But as a scientist, I like working with lichens because there is just so much we don’t know about them, and so many contributions that, as a researcher, you can make to the field. And it’s great to be here at Eastern, because there is so much that the students can do, as graduate or even undergraduate student researchers, that can substantially contribute to our body of knowledge.”

Allen and Lendemer’s discovery was published in Castanea, the journal of the Southern Appalachian Botanical Society. Oprah was unavailable for comment.

Restoring prairie can heal the land, and the people it once sustained.