For more than 30 years, the name Dave Cook has been synonymous with EWU Athletics. Some would say, despite his understated style, that he was the most influential person in the department. As EWU’s Sports Information Director, Cook supplied reporters with endless stats and data before and after games, setup interviews and coordinated hundreds of behind-the-scenes details. He also proved to be a steadying influence for nervous administrators, coaches and athletes who found themselves exposed to the occasionally uncomfortable glare of the sports-media spotlight.

Over the years, Cook witnessed the incredible rise of a football program once denied entry into the Big Sky Conference — a program that would avenge that slight by becoming a perennial conference title contender and 2010 FCS National Champion. Cook also served to advance the interests of Eastern’s other competitive sports, including a men’s basketball program that has made three NCAA Tournament appearances.

Cook, who grew up in Yakima, retired in June. But stepping back doesn’t mean he’s stepping away entirely. In the months following his retirement announcement, he’s often been back at Roos Field to help Monica Jaenicke, his replacement as SID, transition into her new role. Eastern magazine visited with Cook about his years at EWU, his retirement, and what lies ahead for the self-proclaimed “stats geek” who will always be a part of the university’s sports history.

What has it been like so far, being away from EWU Athletics, during what is typically a super busy stretch of the year for the sports information director?

DC: I haven’t been away; far from it! I still have the same commute to campus — consisting of one mile and two stop signs — so I’ll be a frequent visitor. From the day I announced I was retiring in late June, I made a vow to Eastern and myself that I was still going to be involved; especially to assist in the transition and anything to keep the Eastern historical legacy alive. I knew a lot was already on the plate of our Assistant Sports Information Director Monica Jaenicke [now the permanent SID], so I wanted to help where I can with football and men’s basketball. Although I now get to be a fan, my love for Eagle Football and our other programs will never ever waver.

When you announced your retirement, many former and current coaches and players chimed in on what a great experience it was working with you – how did that make you feel? Did it make it harder to walk away?

DC: It was definitely overwhelming and appreciated, and most certainly there was a part of me that regretted retiring about four years before I planned. I still have a lot of energy and passion for work, and I did enjoy greatly being sports information director at Eastern for 31 years. However, once I was able to spend more time with my wife, Freida, in the summer instead of answering a barrage of emails and preparing for another sports season, I understood just how very valuable my time was to me. We went to five music festivals this summer – two of them I wasn’t ever able to do because of the job. And what was crazy about those two festivals was the fact I ran into people with connections to Eastern.

So I guarantee that sweaty old red Eagle cap will be with me on our trips forever. Although Freida continues to work, we’ll also enjoy life — through running and music primarily — and cherish every moment.

I assume you were watching the opening game at UNLV. What was it like to finally be a ‘spectator’ like the rest of us?

DC: I did go on that trip, and was in the press box — and the same with the home game versus my alma mater, Central Washington. So the answer to your question really came on Sept. 18, when I watched the Western Illinois game on ESPN+. It was definitely weird, but not unprecedented, since I had missed football road games before because of basketball home-game conflicts. It was certainly memorable, with Eastern scoring 55 first-half points, Eric Barriere throwing for more yards in a half than any other FCS player in history and the Eagles scoring touchdowns on their first six possessions. I remember sending countless texts to Monica, [game announcers] Larry Weir and Paul Sorensen alerting them to my observations about records broken and potentially broken — with a whole lot of ‘Unbelievable!’ comments about what we all were witnessing. I promised them I would not be so irritating the next time I watch an Eagle game.

As far as the real strangeness of missing an Eastern game, that will come in the playoffs because I’m the only person who has been at each and every playoff game in EWU’s history as a member of the Football Championship Subdivision (formerly I-AA). And the first Eagle home game I miss will be even more surreal — I’ve seen them all since 1990. 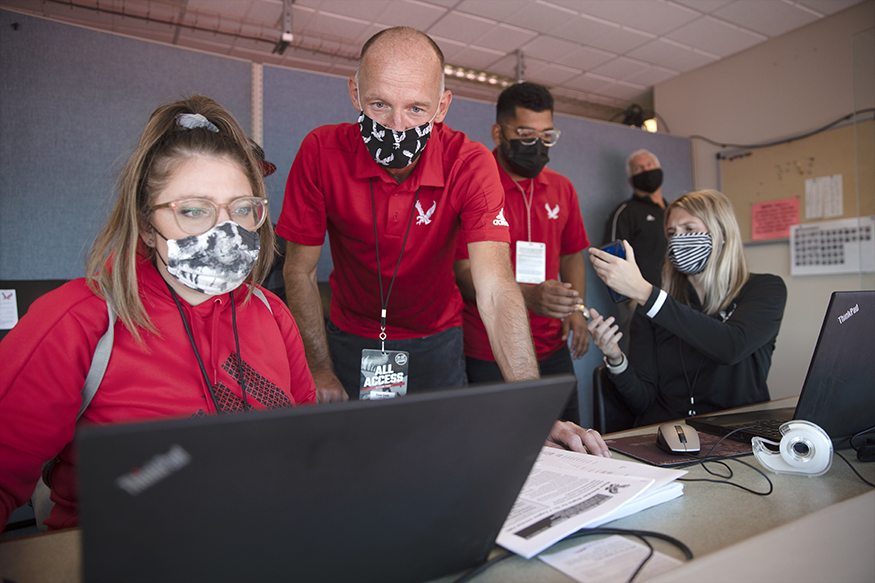 So, are you able to watch an EWU game without subconsciously wanting to take notes or write down stats for your post-game release?

DC: I’ll always take a big gander at the stats during and after games, as well as read the recap and the comments that coaches and players make before and after games. It’s just a relief to know it’s no longer my responsibility to navigate technology we needed to get those stats and information out to the masses. I’ll still try to discover notes as well, and pass them along when I think of them — particularly historical tidbits. I’ve been helping Monica with that, and hopefully she’ll continue to let me visit her office on Sundays!

These days, I can spend a good portion of the game in the stands where the rule, ‘No Cheering in the Press Box,’ is not in play. Most importantly, I’m always available, or a text away, to help Monica. She’s already been marvelous at the job, and I look forward to celebrating HER tenure when she retires in 30 or so years!

I know you’ve got a lot of great memories. But what do you miss least?

DC: I enjoyed most of the job, most of the time — especially interactions with coaches, players, media and game staff. [Toward the end] I just couldn’t keep up with a never-ending flurry of requests, technology changes and the workload on nights and weekends. So, despite my love for EWU, I felt it was time for me to hang it up. But by no means did I leave bitter or have any animosity towards others.

It’s just the way most jobs, professions and organizations operate these days, and I made the choice to retire a bit earlier than most [Cook is 58].

Looking back at your years at EWU, which season stands out as the most memorable?

DC: Honestly, it would have to be my first, when I served as an interim SID during the 1985-86 school year. Eastern had just been denied admission into the Big Sky Conference, so the year and my career started on a somewhat somber note. But that year the football team won nine games, beating Idaho in the playoffs. And the men’s basketball team won 20 games. My memories and experiences working alongside Ron Raver, John Johnson, Dick Zornes, Judy Crabb and Kerry Moxcey shaped my professional life ever since. It was an amazing group of people that I got to learn from, and much of that I used while at Idaho as SID from 1986-90 before returning to EWU.

Two years later the Big Sky admitted Eastern. The growth trajectory since then has been nothing short of amazing, so I’m equally as proud of seasons such as 1992 [first Big Sky Conference title in football], 1997 [playoff semifinals], 2004 [first NCAA Tournament berth in basketball], 2010 [FCS National Champions], 2015 when beating Montana in Missoula to win the Big Sky tournament title [and an NCAA Tournament birth] and 2018 [FCS football national runner-up]. To cap it all off, I was able to spend a week in the “bubble” in Indianapolis at the NCAA Tournament, followed by a berth in the spring football playoffs — making EWU the only school in the nation to qualify for the playoffs in NCAA Division I in both sports. I could go on and on, and of course I’d have a list. Making lists was essentially my life for 35 years.

Do you plan to stay involved with the university?

DC: As much as I can! But what I didn’t anticipate was how much I’d enjoy working at Michael Anderson Elementary, a part of the Medical Lake School District on Fairchild Air Force base. My wife is in her 31st year there, and is now an instructional coach for the school of 377 students. She convinced me this summer to complete paperwork to become a substitute para-educator on occasion and receive base access, and I looked forward to joining my wife at her workplace for a change. She has long been a staff worker at EWU football games, and has helped us when needed, but I never had the military clearance to visit her on a regular basis.

From that first day on, I’ve tried to be a willing servant and that ‘jack of all trades, master of none’ type of sub for the school. I’ve been able to work with the kids in classrooms, which is by far my favorite task. But I’ve also helped in the library, monitored recesses, assisted with bus-loading duty, labeled new books and classroom curriculum, handed out breakfasts and took on myriad of other duties as they arose.

I even spent a full day substituting in PE, and nearly a week working in the kitchen helping to prepare and serve breakfast and lunch. What I thought would be a glimpse at K-12 education has turned into an “eyes-wide-open emoji” — multiplied by 100. My experience and amazement at the school has given me and an incredible appreciation for what educators do each day for these kiddos. And the corn dogs and mac-and-cheese is mighty good too!

How about your passion for running — is that continuing? Or did you also hang up the running shoes when you retired from Eastern?

DC: God-willing, the running shoes will NEVER be hung up. My daily run — three miles a day for more than 10 years — will always be the most important part of my day. But with an earlier wake-up call to serve at the elementary school, I’ve had to navigate running in darkness earlier than expected. In fact, recently I was blinded by the lights of an early-morning bus, and as I tried to shuffle from the road to the sidewalk, I ran smack dab into a garbage can on the curb and knocked it down. Neither myself nor the can suffered injury, thankfully. Now I think of that garbage can as an apt characterization of my retired life: Whatever comes before me, just knock it down, laugh it off and live to run another day.