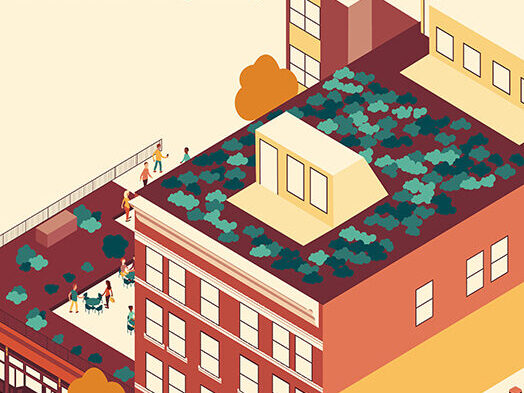 Just southwest of the University District, near the corner of N. Browne St. and Main, lies one of Spokane’s most trendy city blocks, a bustling pocket of once neglected, now mostly restored historic buildings.

The casual visitor might be forgiven for imagining that this hipster-friendly assortment of businesses is simply a funky shopping and entertainment hub. But as Summer Hess ’12 points out in a new account of the area, the mini-district collectively known as the Community Building Campus is, in fact, merely the latest phase in a two-decades-long attempt to create a more socially conscious, community-driven form of urban development. The idea being, as one civic leader puts it, to help “good people and good organizations [do] great things for our world.”

The book, One-Block Revolution, is a collection of 19 essays that reflect on the campus and its wider impact — both in Spokane and around the country. Hess says she first encountered the campus as an EWU work-study student in 2009. She later became an assistant and project manager for its founder, Jim Sheehan, a former public defender and activist. Hess says the essays’ aim is to provide “on-the-ground examples of experimental and non-traditional philanthropy and community-centered development.”

“Most private developers put profit first,” she explains, “and some try to make accommodations for sustainability or human happiness in order to make their projects more marketable or desirable. The Community Building Campus, on the other hand, puts people and the environment first.”

Putting people before profit is at the core of the “revolutionary” aspect of the one-block campus. “This book provides an alternative framework for how wealth can be shared and used for a more collective good,” Hess says.

One-Block Revolution, which best-selling novelist Jess Walter ’87 has called “a fascinating collection of pieces about my favorite neighborhood in Spokane,” is available at major retailers and through its locally owned publisher, Latah Books.

Restoring prairie can heal the land, and the people it once sustained.