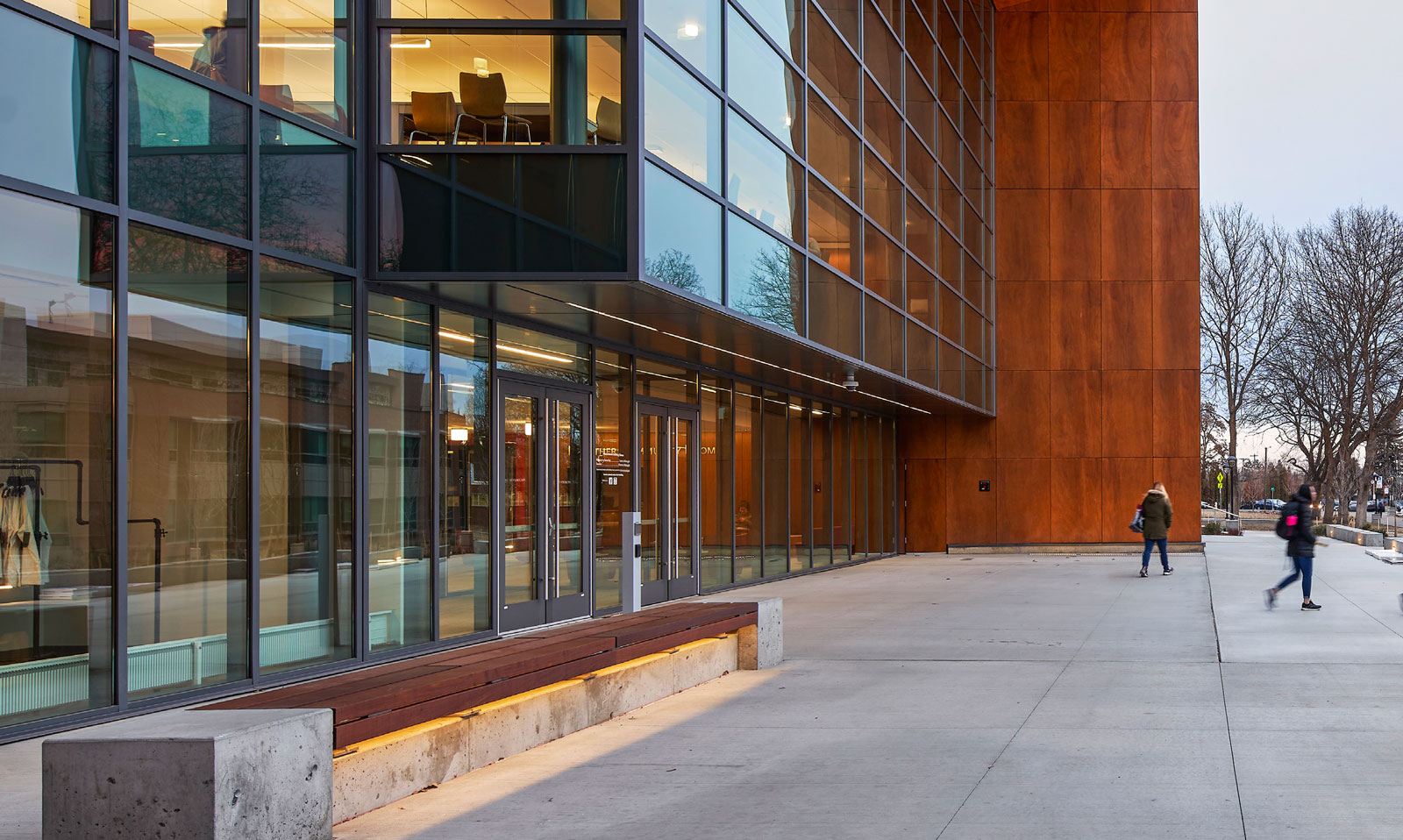 On a sunny Friday last October, after nearly six years of planning and construction, a crowd of students, faculty and friends gathered beneath the soaring entryway of Eastern’s newest old structure – the rebuilt, refurbished and reimagined Pence Union Building.

“The PUB,” said a smiling EWU President Mary Cullinan as she cut a ceremonial ribbon, “has been transformed.”

Crowd members nodded in agreement and anticipation. Even from the outside looking in, it was obvious the new PUB was very different than the old: open and gracious, not closed and opaque; welcoming and warm, not citadel-like and icy. Guests at the event remarked on how its blond wood gleamed, how its polished glass glowed with the colors of the sky, how its angled elevations seemed to reach up and out across its clean-scrubbed entry plazas, as if inviting surrounding structures to embrace it.

“It brings everything together,” said one of the new PUB’s architects. “Before, there were two existing buildings that had never quite connected.”

No kidding. By almost all accounts the two merged buildings connected neither with the campus nor the students they were meant to serve. For almost 50 years in fact, the old PUB and its 1990s-era addition stood as an awkward, unappreciated rebuke; a cautionary testimonial, if you will, to the incontrovertible truth that decisions in brick and mortar have especially long-lasting consequences.

The PUB’s story begins around the same time the Ford Motor Company foisted its Pinto upon an unsuspecting car buying public. The date: November, 1970. The place: EWU’s rapidly expanding Cheney campus. A new, $2.3 million student-union structure was nearing completion, part of a building boom that would see some half-a-dozen new facilities expand and modernize Eastern’s physical footprint. This project, to be named for faculty stalwart Omer Pence, was behind schedule — the planned September opening had been pushed back to sometime “between fall and winter quarters.” Don’t worry, planners said, the building would be worth the wait.

More than just a home for “student activities and food service,” they promised the new union would rise as a modernist monument; a statement in brick and steel to Eastern’s ambitions, to its sense of itself as an institution on the rise.

But from its start, like Ford’s Pinto, the Pence Union Building was not easy to love.

Though not executed in textbook form, PUB designers were heavily influenced by a wave of “Brutalist” architecture that was rolling across the nation’s collegiate landscape. The austere, angular style was named for the béton brut — the “raw concrete” — that period superstars like Le Corbusier made a conspicuous part of their oeuvre.

For administrators on rapidly growing college campuses, the style offered obvious advantages: Brutalist structures were easy to build, relatively inexpensive and, perhaps most importantly, powerful visual demonstrations of the “forward-thinking” nature of their institutions.

Yet instead of becoming what one period architect called “richly expressive citadels for high culture,” Brutalist buildings soon became objects of derision: dark, maze-like, uninviting, ugly, were all common descriptors. At Eastern, students were baffled by the new PUB’s lack of windows, and found its brooding, fortress-like footprint off-putting. They puzzled over why a student union building, a place that, by definition, was meant to bring people together, lacked open, welcoming spaces. They were even confused, apparently, about what to do with their trash.

Within weeks of the PUB’s grand opening, administrators took to the pages of The Easterner to plead with students to use the rubbish receptacles: “There is no way [for custodial staff] to keep up with 6,000 students, nearly 500 coming in during every class break, who drop paper cups, cigarette butts, gum wrappers, and all kinds of trash on the floors, not more than 20 feet from a garbage can,” an exasperated Walt Zabel, director of student activities, told the paper.

What was perhaps most vexing to students was the stark contrast between the new PUB and the SUB, the previous “student union building,” it replaced. That union, now Isle Hall, was a crowded but convivial space. Bill Stimson, ’70, remembers how at home he felt there, and how much Eastern students — perhaps more so than at other universities — valued its friendly confines.

“That was my whole world,” says Stimson, now a professor of journalism at EWU. “Eastern was a commuter college, even more so back then, so a lot of people hung out at the SUB. It was the perfect connecting place. A student union building really is the heart of education, and the conversations you have about teachers, occasionally about ideas, and the arguments you have are an important part of college. You need that kind of human connection.”

Imperfections notwithstanding, over the years the PUB did, in fact, provide such connections for thousands of Eastern students.

Mark Nysether, ’78, was one of them. “It was my place to go,” says Nysether, a former Beta Kai Epsilon fraternity member who now runs the Everett-based Sea-Dog Corp., a supplier of marine hardware. He says he has particularly fond memories of ping-pong sessions in the PUB’s game room.

Beyond old-school gaming, Nysether, a transfer student from Everett Community College, was keenly focused on the advancement possibilities offered by Eastern, an institution seeking to shed its commuter-college reputation by emphasizing its status as a residential, four-year institution. On the Cheney campus he quickly built a home for himself, becoming active in both the Greek system and student government. He came to care deeply, he says, about the future of the university and its long term well-being.

That interest has continued over the years, and Nysether has leveraged his business success to make donations to various Eastern undertakings. But there was one project in particular that, almost the moment he learned of it, he knew he wanted to be a part of.

“I had donated to causes every couple of years,” says Nysether. “Then, in the spring, I heard they were going to be doing some fundraising for the PUB. I was in.”

Like thousands of other students over the years, the memories Nysether made in the PUB were tempered by the building’s limitations; that lack of light, those cramped spaces, the incoherent “circulation” — a term architects use to describe how people move, or “flow,” from area to area. A major expansion in 1994, meant to expand student dining options, added a second, less-forbidding-looking building to the mix. But that structure did little to broaden the PUB’s appeal. The two buildings were joined haphazardly, creating a structural muddle that mostly accentuated the liabilities of both.

Finally, as the PUB approached its 50th birthday, EWU students, administrators and alumni donors like Nysether all found themselves of one mind; it was time to de-Brutalize the PUB.

The push began almost six years ago. EWU administrators first engaged Perkins+Will, a Chicago-based architectural firm with offices in Seattle, to radically rethink the PUB’s look and feel. The Perkins+Will plan was then pitched to EWU students, who, by voting to increase their student-services fees, would bear the brunt of its estimated $47 million costs. University community engagement professionals, meanwhile, contacted potential donors such as Nysether, asking if they might be willing to pitch in with private support.

By late 2016, the project had approvals and funding in place. In December, the old PUB shut its doors for the last time as Spokane general contractor Leone & Keeble, Inc. — the same firm that led the recent overhaul of Patterson Hall — began work. Their goal, according to a published account from Perkins+Will’s Anthony Gianopoulos, was to upend the Brutalist approach, creating instead “an easy-to-navigate, open-concept layout that is infused with natural light and supports a rich array of spaces in which students can interact, work, eat, study, lounge and socialize.”

Over the next two years, workers made this happen. They created an open floor plan by gutting the walls and ceilings of the old PUB’s 120,000-square-foot interior and adding an additional 4,000-square-feet. They tore out the awkward connection between the original building and its 1970s-era addition, replacing it with a stunning atrium of glass, steel and blond wood.

This soaring, light-infused atrium space is the heart of the new PUB. Envisioned as a multilevel “stairway through campus,” it ties together all three floors of the re-envisioned building, providing access to student-club suites, conference rooms and food service areas. All of these, Gianopoulos says, were purpose-built to be highly visible to passersby, encouraging students, faculty and staff to connect and engage in a way that wasn’t possible in the old building.

On one side of the ground floor, meanwhile, workers built a “modernized multipurpose room” that includes a state-of-the-art stage, sound equipment and acoustical fixtures for music performances and speaking engagements. On the other side they created a new, expanded space for the Eagle Store, one that couldn’t come soon enough for its managers.

Student leaders agree. Designers of the new PUB made a point of providing members of Eastern’s Associated Students with new, glass-walled meeting spaces — rooms meant to allow passing Eagles a chance to see their student government in action.

During the two-year construction period, ASEWU offices were relocated to a spot in Sutton Hall that was seldom visited, says ASEWU President Dante Tyler. With the grand reopening the offices are not only back, but highly visible. “The number of students coming in and talking to us has increased,” Tyler says. “More students [now] know what ASEWU is. And being able to talk to them is great.”

It is exactly this sort of engagement that had Mark Nysether hooked on the project from the beginning. It’s thus not surprising that PUB planners chose to recognize his contributions by dubbing the multipurpose space the Nysether Community Room, a space suited for similarly meaningful interactions that, perhaps in a slightly ironic way, the Brutalist designers of the original PUB would also have been thrilled to see.

Nysether, for his part, couldn’t be happier about the whole thing. “It’s amazing,” he says after attending the sneak-peek tour last fall. “It’s just a beautiful, well thought out, well-done building.”