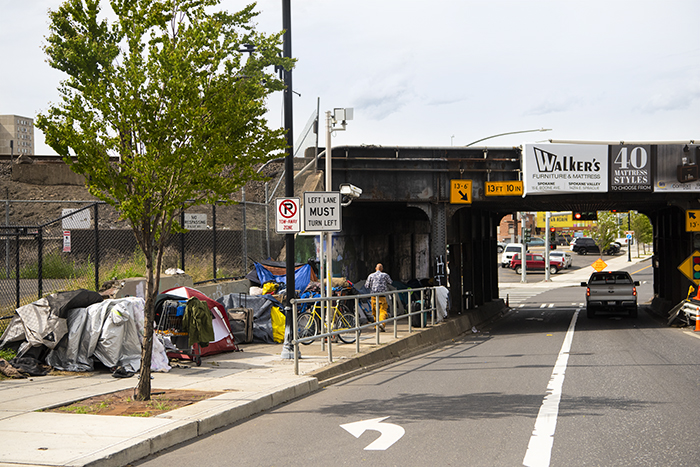 An EWU researcher and his students aim to quantify the scope of homelessness.

For individuals and families who lack a permanent place to call home — and those trying to help them — the journey to stable housing is often long and arduous. Even understanding the scale and scope of the problem is a challenge.

Spokane’s annual Point-in-Time Count, a county-wide census of persons without housing, aims to bring the issue into better focus. The annual count, a federally mandated and funded effort, brings volunteer data-collectors into the city’s streets and shelters to pose questions central to the homelessness issue: How many are lacking housing, and why? Who are those in most need? What barriers are they facing, and how might the city and county more successfully assist them?

This year’s event, held in February, was organized by the city’s Community, Housing and Human Services Department. It included a significant boost from Eastern faculty and student volunteers, among them EWU’s Matthew Anderson, an associate professor of urban and regional planning who was recently awarded EWU’s prestigious Jeffers W. Chertok Memorial Endowed Professorship.

Among these fallacies, says Anderson, is the widely held belief that most of the city’s unhoused are from elsewhere. In fact, he says, a solid majority are local.

Anderson, whose research background includes work in environmental justice, sustainability and city-planning theory, says the Chertok Professorship allowed him to fund three Eastern graduate students to help with the effort. In addition to tabulating numbers, these and other Eastern student volunteers also collected broader survey data — information they hope may help dispel common misconceptions about the local homeless population.

Among these fallacies, says Anderson, is the widely held belief that most of the city’s unhoused are from elsewhere. In fact, he says, a solid majority are local. And while it’s true some are homeless chiefly because of drug and alcohol dependencies, he adds, “there’s just as many who aren’t addicted to drugs.”

In reality, Anderson continues, poor decision making is seldom the sole cause of homelessness. Instead it usually boils down to a lack of affordable housing, robust tenants’ rights laws and reduced government funding. “All it takes to become homeless is an eviction or losing your job. Any number of things can happen — medical problems, [lack of] healthcare coverage, a bill you couldn’t pay. All it takes is getting evicted,” he says.

For their part, city and county officials were effusive in their praise of Eastern’s contribution, and for all of the volunteers.

“The partnership with EWU is a shining example of how teamwork makes the dream work,” says EWU alumna Amira Djulovic ’06, Spokane’s Point-in-Time Count coordinator. “About 140 [total] volunteers signed up for this year’s count, which is phenomenal considering the pandemic. It shows the heart of our community.”

Additional Coverage: Public libraries are overwhelmed by patrons in crisis. Eagle students are stepping up to help.

According to the American Library Association, people experiencing poverty or homelessness now account for “a significant portion of users” in public libraries across the nation. “As the number of poor children, adults, and families in America rise,” the association says, “so does the urgent need for libraries to effectively respond to their needs.”

This is certainly the case in much of the Inland Northwest, where administrators find themselves struggling to ensure that library-based information resources, services and technologies remain open to everyone. In Spokane at least, help is on the way; thanks, in part, to a group of Eastern social work students.

“We’ve seen an increasing need for additional support for some of our customers that is outside the expertise of traditional library staff,” said Andrew Chanse, the library’s executive director, in a news release. By adding a social worker and interns, he continued, the library will be able to better serve the needs of those experiencing life challenges.

The plan, Chanse adds, is to create a “welcome team” that will assist at-risk patrons without creating additional burdens for front-line staff. Modeled after the CARES team at the Spokane Fire Department, the team will use the expertise of Eastern’s interns to help guide the homeless and others toward available services.

“By making this staffing change, we can synergize with EWU and make a real difference,” says Paul Chapin, the library’s customer-experience manager, who organized the welcome team’s formation.