The ‘Buzz’ is Back 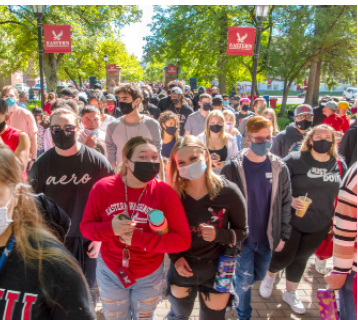 On a near-perfect, end-of-summer Tuesday in September — less than 24 hours before the university’s much anticipated return to in-person instruction — Eastern’s interim president, David May, took the stage in Showalter Auditorium to deliver an emphatic message: “We are back!”

“There is a vibrancy on the mall that we have not had since March 2020,” May told a cheering, fully masked crowd. “Just take a moment and let that sink in: March of 2020. Today there’s a buzz. There’s a buzz that those of us who have been around this place know and love. It’s intoxicating to feel the energy of so many people back in this special place.”

“Just take a moment and let that sink in: March of 2020. Today there’s a buzz. There’s a buzz that those of us who have been around this place know and love.”

May’s address came 18 months after students, faculty and staff last congregated on EWU’s Cheney campus, a virus-induced necessity that denied nearly two full classes of Eagles the often life-altering experience of full-on campus engagement. “Students have been awaiting this day perhaps more eagerly than any of us — and you can see it in the smiles on their faces,” May said.

“I know one thing we’ve learned in the last year-and-a-half,” he added to applause, “we are not an online university!”

Among EWU’s top priorities, May noted, is attracting additional state backing — along with private donor support — for critical student and institutional needs. The university must also, he said, continue to address its enrollment and retention challenges, while at the same time engaging with faculty in a comprehensive, collaborative discussion of how best to optimize Eastern’s academic offerings.

Such concerns notwithstanding, however, May’s address remained upbeat. “If we remain resolute, if we look for solutions rather than blame, if we are creative, if we are responsive, if we build together: Then we are Eagle Strong,” he said.