Not only will the new Catalyst structure help change the way the world constructs buildings, it will alter for the better the way students learn and companies do business.

Innovators can see a future where others see only blight. When they look across an industrialized riverscape, over scrubby railroad tracks to the “wrong” side of town, they see opportunity. The innovators who sparked the South Landing Project in Spokane’s East Sprague neighborhood are leading a powerful transformation. Not only will the new Catalyst they’ve championed help change the way the world constructs buildings, it will alter for the better the way students learn and companies do business — a revolution that Eastern Washington University will be
right in the middle of.

The South Landing Project started in 2004 with a bridge — a pedestrian overpass designed to connect the downtown Spokane core, the University District and the medical complexes along the Lower South Hill. Bringing these areas together, the thinking went, was key to encouraging their economic advancement, especially in the burgeoning health science and technology industries.

Fifteen years after its conception, the University District Gateway Bridge opened to foot and bicycle traffic, immediately becoming a new landmark on the Spokane skyline. A 120-foot tall concrete arch seemed to call, “This way to the future.” But the future on the other side of the railroad tracks wasn’t immediately clear to the community. For decades, East Sprague had been an underserved neighborhood often associated with street crime and prostitution.

“When the University District Bridge was funded, it was really exciting, but all of the sudden folks said, ‘What’s going to go on the south side?’” recalls Latisha Hill, vice president of community and economic vitality for Avista. The utility owns the land on the south side of the Gateway Bridge. It was Avista chairman, and CEO at the time, Scott Morris who had the vision to create what he called the “five smartest blocks in the world” there, Hill says. 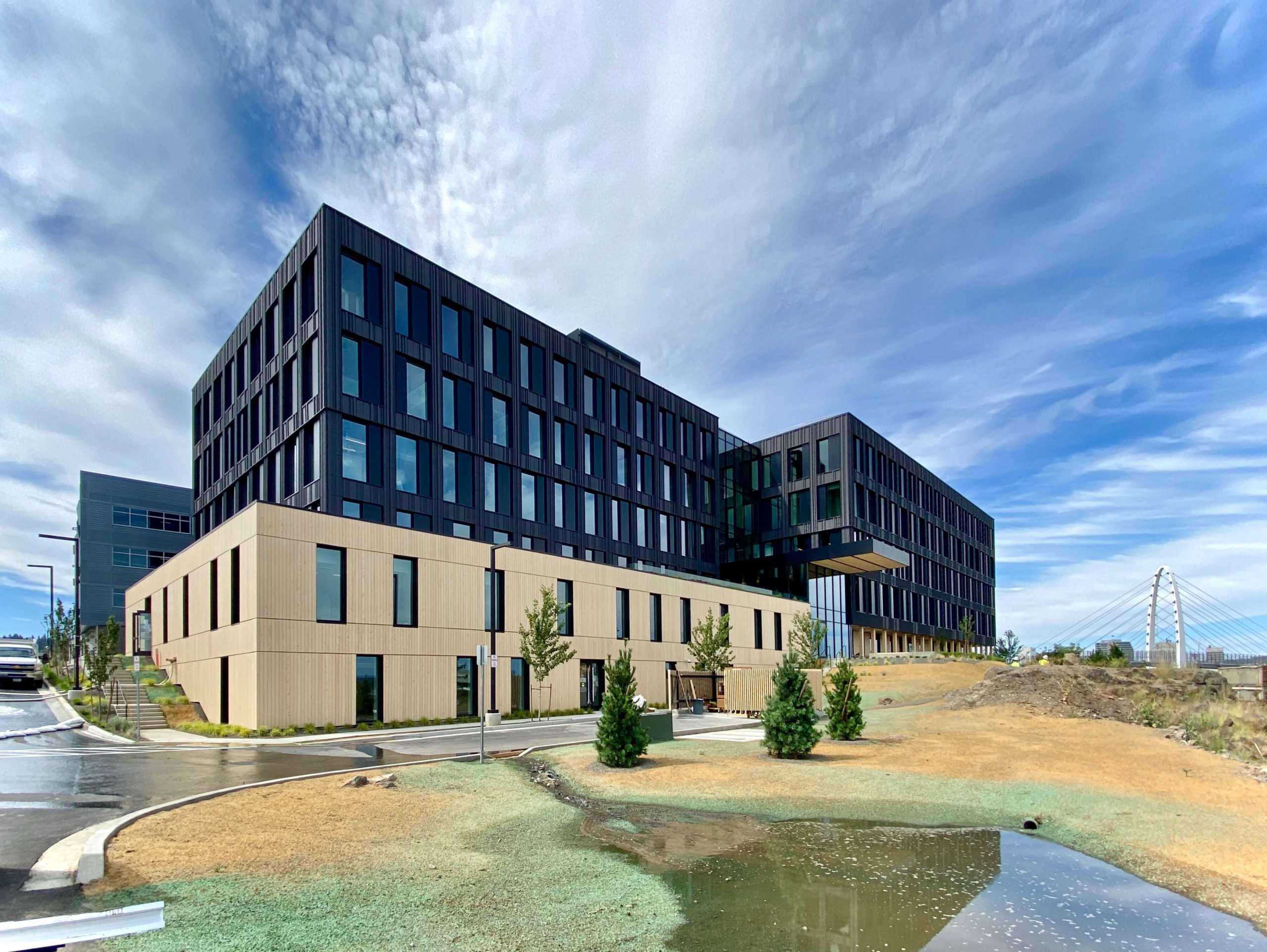 “We had not only an opportunity, but an obligation to create something that could be really special and long lasting for the next phase of the University District and its connection with health care, business, industry and innovation.”

With this vision in mind, Avista purchased several parcels of land, then partnered with some of the brightest construction minds in the nation to develop them. The goal, ultimately, was to give East Sprague a new identity as a leader in energy innovation, environmentally conscious construction and sustainability.

‘You can make an impact on EWU’s future in the Catalyst. To find out how, visit ewu.edu/catalyst. Interested in naming rights? Contact Laura Thayer at 509.359.6901.‘

The heart of the South Landing Project is its ecologically friendly building footprint, a shared space where super-efficient “shared energy” fuels multiple structures.

“Most buildings are constructed one at a time, each with a dedicated heating and cooling system and their own grid connection,” says Heather Rosentrater, Avista’s senior vice president of energy delivery. “But Avista and our South Landing partner McKinstry are testing a new shared energy model called an Eco District—a centralized heating, cooling and electrical system that reliably, sustainably and affordably serves the energy needs of a group of buildings.”

The guts of the Eco District reside within the Scott Morris Center for Energy Innovation, the first building constructed at the South Landing site. Inside, you can see a network of heat pumps, boilers and chillers that supply the heating and cooling. Solar panels line much of the roof space of the Morris Center (as they do the neighboring Catalyst building), while thermal and electrical storage units ensure that energy to the complex can be both generated and stored.

Instead of operating in silos, explains Rosentrater, the Catalyst and Morris Center structures have been designed to “talk” to each other. Thousands of sensors track ambient conditions, air quality, occupancy and other attributes. All of this technology allows building operators to actively manage energy loads and balance on-site energy demand, generation and storage in real-time, which reduces the impact on the city’s power grid.

“By actively managing energy, we can maximize the efficiency of the building and its operations—along with when and how to best utilize the grid—all while keeping occupants comfortable,” Rosentrater says. “It’s a win-win-win.”

Avista will also utilize the South Landing Eco District as a living laboratory where the utility will research and test additional sharable, sustainable and affordable energy solutions to benefit all of its customers—and hopefully drive change for the entire industry.

The Eco District is only part of the equation. Next, Avista’s partner McKinstry needed an anchor building for South Landing that would meet the highest energy standards.

“The world is changing rapidly, or if it isn’t, it needs to change quicker in terms of energy,” says John Lang, director of design services for McKinstry. “We’re all about saving energy, that’s the bottom line here.”

McKinstry is a national leader in designing and operating high-performing buildings. The Seattle-based company has in recent years put down roots in the Inland Northwest, operating multiple facilities in the Spokane area. 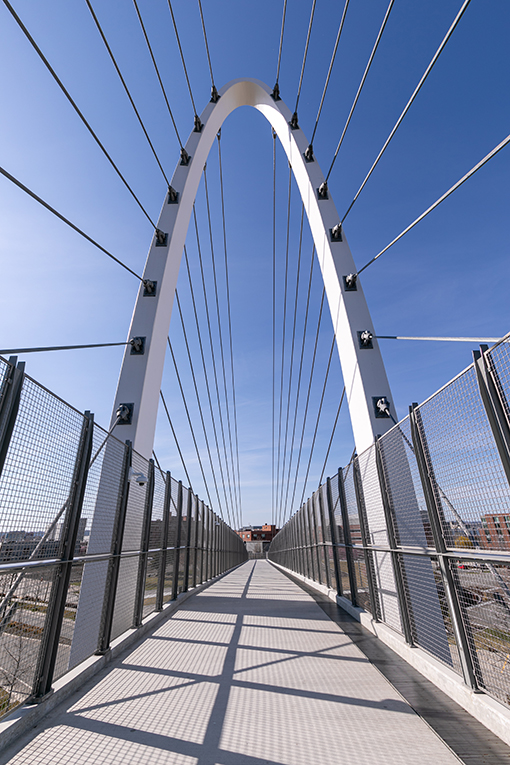 Avista recruited local timber industry leader, Katerra, to work with McKinstry to design and build the Catalyst building — a 150,000-square-foot, five-story building — using wood. Katerra operates a mass timber production line in Spokane Valley where it produces a high-quality building material called cross-laminated timber, or CLT, and houses one of the largest presses for creating CLT in the world.

Katerra design partner, Michael Green Architecture, based in Vancouver, British Columbia, designed the building. The firm has been leading the global conversation on timber construction for more than 20 years, and built the first “tall wood” building in North America, a seven-story office building in Minneapolis.

Principal architect Michael Green calls cross-laminated timber the “grand daddy” of mass-timber products. “They’re taking a piece of wood, which is already very strong, and they’re gluing it together in a way that makes it even stronger,” he says.

The cross-laminating process involves lining up rows of small-gauge wood, like 2x4s, and gluing the rows on top of one another, alternating each row by 90 degrees. The finished panels can be three, five or seven layers thick. “It’s kind of like a big, thick sandwich of these boards that are cross laminated by rotating every layer,” Green says.

The strength of the material is crucial for building a structure the size of the Catalyst, and of course wood is a renewable resource. But there is an even more important reason to build with wood: It is the only material that stores carbon rather than emits it. According to Green, buildings in the United States represent about 47 percent of greenhouse gas emissions. That’s more than cars. All transportation, in fact, accounts for only 27 percent of such emissions, he says.

“Wood buildings do the opposite. As a tree grows, it’s giving us oxygen while soaking up the carbon dioxide from the atmosphere. When you cut down the tree and put it into a building, it’s basically storing the carbon dioxide in the building for the life of the building,” Green explains. “That means instead of emitting greenhouse gasses, we’re actually creating a place where we can store greenhouse gasses.”

Green is also a proponent of wood construction due to its positive impact on human stress. According to industry research, when we can see nature or are surrounded by natural products, stress levels go down. We learn more quickly and work more productively. Thus the Catalyst was designed to showcase as much CLT as possible.

The same consideration was given to the design of the Catalyst’s windows. “We spent a lot of time doing day lighting studies in this building, and I think the quality of light surpassed what I was expecting. It’s just absolutely wonderful,” says Lang.

Thirty-foot tall windows flood the space with natural light, while the triple-pane windows are filled with argon gas to minimize heat loss and heat gain. The number of windows throughout the building was deliberately planned at a 60-percent-solid to 40-percent-window ratio to balance the amount of heat-generating daylight with the need for more highly insulated solid walls.

The exterior is constructed with a high-performance terracotta material, which is an excellent insulator and has a natural texture which breaks up sound—thus helping minimize the noisy train traffic rumbling by. The exterior and windows are also air tight, which keeps the interior heating and cooling costs down.

“The company that tested Catalyst for air tightness said it was the tightest building they’ve ever tested in North America. That made us very happy,” says Lang.

“This building is going to be one of the top performing energy buildings in the nation, certainly for its size,” adds Green. “It’s going to show other builders that [structures like this] can be done in a cost-effective way, and hopefully be part of the change we need to make buildings far more energy effective than they are today.”

A building bursting with this much innovation deserves to be filled with the brightest minds in the region. Some 1,000 EWU students will proudly occupy about 70 percent of the Catalyst building, which was purposely designed to allow Eastern to lead a transformation in the way it and other universities collaborate with their communities.

“We tried to create a dynamic number of spaces that hopefully will bring people together,” says Green. “A building and [its] architecture aren’t important until it fills up with people who make it special and who bring the warmth and joy and community to the building.” 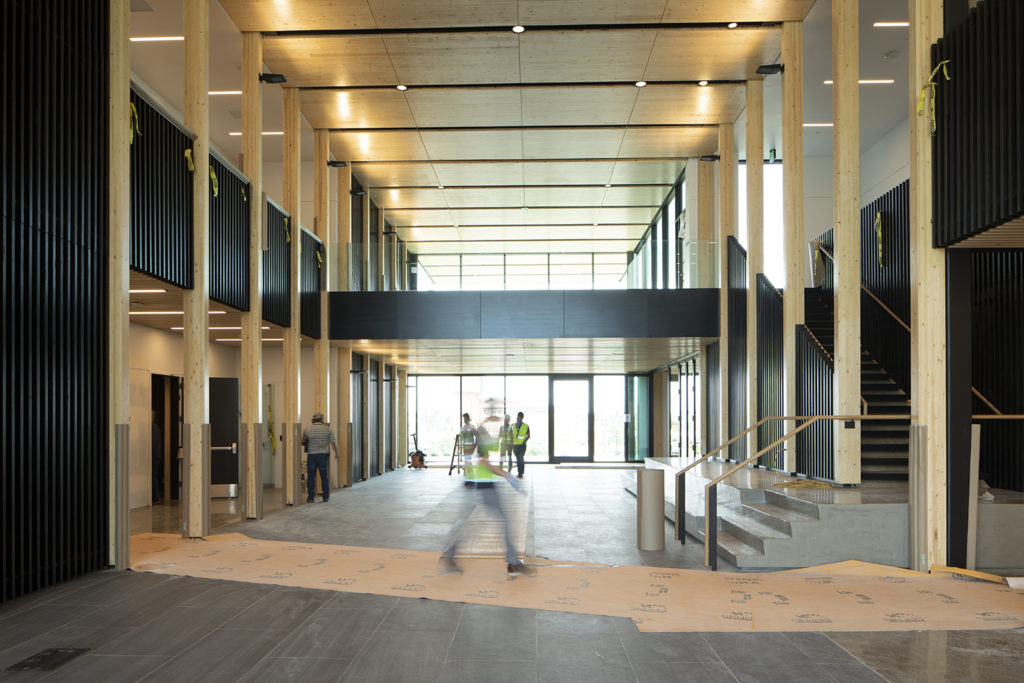 Eastern, already an important economic driver for the region, is committed to pushing the creative and high-tech vitality of the Inland Northwest forward. Expanding into the Catalyst space will allow some of the university’s most successful programs to better position themselves to work alongside businesses and industry.

“Having the opportunity to be housed right in downtown Spokane is going to present an incredible opportunity for faculty and students to apply their learning directly to real world problems with real working engineers, designers and computer scientists,” says David Bowman, dean of EWU’s College of Science, Technology, Engineering and Mathematics. “It’s going to be the epitome of hands-on learning for our students, and hands-on research and scholarly activities for our faculty.”

The College of STEM is relocating three programs to the Catalyst: computer science, electrical engineering, and design. The programs were specifically chosen because of their relationship to the tech and business industries. STEM also is planning to create a new program, computer engineering, which will be housed in Catalyst. Additionally, the College of Business, along with some College of Health Science and Public Health programs, will relocate from the north side of the University District to the Catalyst. EWU’s Creative Writing MFA program will also be based there.

“The whole idea behind Catalyst — the reason it’s called Catalyst — is that the entire project should stimulate reactions among our faculty and our students and businesses. Bringing more programs together is just going to allow us to make the reaction event bigger,” says Bowman. “It is such a wonderfully warm, beautiful and comfortable environment. I think it’s a game changer for our faculty and for our students.”

Eastern’s involvement in Catalyst was made possible, in part, thanks to a $5 million gift from the Avista Foundation and the McKinstry Charitable Foundation—a public-private partnership that will serve the community for generations to come. Working together, these agencies have helped raised the bar for future development, and brought higher education closer to the regional businesses and industries it serves.

Another plus is that EWU is now leading the expansion of Spokane’s University District, a move which will allow students and faculty to help the East Sprague neighborhood emerge as a tech and energy center for Spokane.

“What’s really amazing about our community is that we always punch above our weight,” says Avista’s Latisha Hill. “We create grand visions, and then we are often taken aback when we actually achieve them. I think the South Landing is a reflection of that.”