A Next-Generation Science Star Steps Up

Earlier this year Marcos Monteiro, a molecular biology student at EWU, earned the university’s first-ever Goldwater Scholarship. Think of it as the start of something big.

When he arrived in the United States from Brazil six years ago, Marcos Monteiro started down a winding path in search of his future. That road would eventually find him sharing a home with his sister’s family in Provo, Utah, falling in love and marrying a Spokane native, enrolling at Spokane Falls Community College to be closer to her family before, finally, transferring to EWU at the end of 2018. At Eastern he would find life-altering mentorships, forward-looking research opportunities and, most recently, recognition as a Barry Goldwater Scholar, as accolade reserved for the nation’s top STEM students.

The Barry Goldwater Scholarship, established by Congress in 1986 to serve as a memorial to the work of the late Arizona senator, is one of the most competitive in the country. Monteiro, a senior, is the first Eastern student named a Goldwater Scholar. He is one of only eight students in Washington state to be so honored.

The scholarship will provide him with $7,500 to complete his senior year at EWU. As is typical of Monteiro, he says he’ll be using the funds to do extra course work in preparation for graduate studies. “I’m applying this fall,” says Monteiro. “If I’m approved, I will start the PhD program in the fall of 2020.”

His professors are confident he’ll have plenty of offers to choose from.

“He’s an awesome student, probably one of the best I’ve had here,” says Andrea Castillo, associate professor in biology and one of Monteiro’s mentors. “I don’t see him having any trouble getting into any school.”

About this there is little doubt. Monteiro, who is studying microbiology and molecular biology, boasts a perfect grade-point average and has already distinguished himself as an undergraduate researcher.

One of the chief qualifications for a Goldwater scholarship, for example, is that students have published their research in leading journals or have presented their work at conferences. Monteiro met that high bar with a study involving manuka honey, a type of honey native to New Zealand that is reputed to have powerful antibacterial properties. 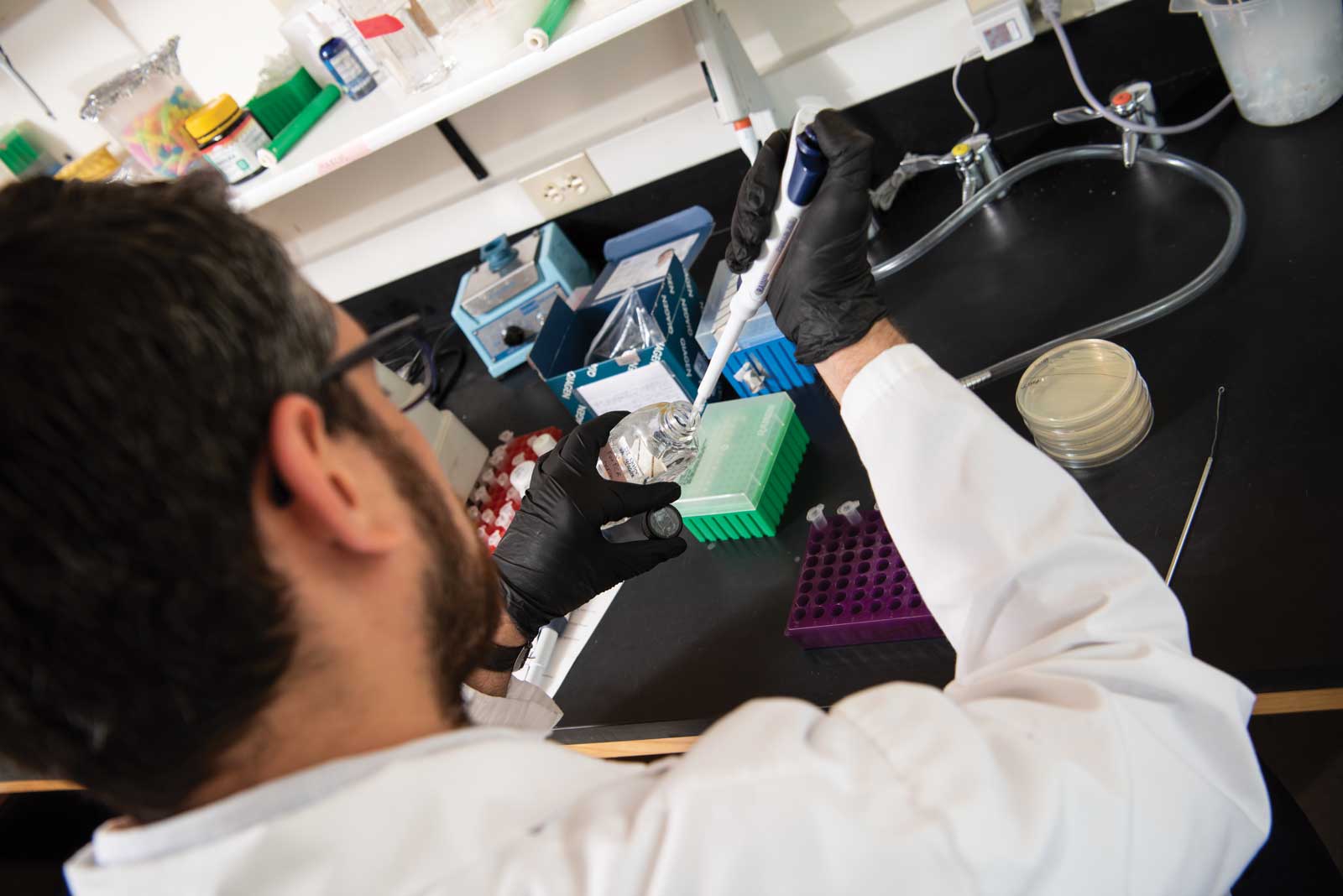 Monteiro helped determine that the honey does, in fact, have real therapeutic potential — this thanks to its unique ability to alter the iron uptake in a particularly nasty, multidrug-resistant bacterium, Pseudomonas aeruginosa, effectively killing it. “Consequently, manuka honey can be used to treat these patients,” he says. “And knowing its antimicrobial action can help the medical community to better understand how manuka honey can treat infections.”

Monteiro presented his work at multiple conferences last year, including a presentation at the Murdock Undergraduate Research Conference. According to his mentor Castillo, Monteiro and his collaborators expect to publish the study soon.

Monteiro isn’t doing research just to bolster his already impressive resume, he’s doing it, he says, because he wants to make a difference for the people in his community.

He is currently involved in a new research project alongside Castillo and another advisor, Javier Ochoa-Repáraz, assistant professor in biology at EWU. They are working to engineer a probiotic that they hope might one day provide an important tool in the fight against neurodegenerative illnesses such as multiple sclerosis.

Over the summer, Monteiro’s road took another twist as he traveled west to Seattle. While there he hit pause on the probiotic project to complete an internship at the prestigious Fred Hutchinson Cancer Research Center. The intensive, nine-week program gave Monteiro more biomedical research experience.

“I worked in Neelendu “Neel” Dey’s lab. He’s a doctor, a gastroenterologist and he works with the gut microbiome,” says Monteiro. The Dey lab at Fred Hutchinson is investigating the role of the gut microbiome in the development of colorectal cancer. Monteiro’s job was to analyze one of the bacteria of the microbiome and study the genes that it contains.

“We were interested to know what is the beginning of this cascade that can lead to colorectal cancer,” says Monteiro. “And so my role was to clone these genes and to characterize them.”

His experience in the Fred Hutchinson lab will allow Monteiro to bring new knowledge to the probiotic research project underway at Eastern. “I had a lot of trouble during the internship just to try to do the cloning,” he says. “There was a lot of troubleshooting. So, thinking about how to troubleshoot made me realize that that’s a skill that is important in research and that I need to think differently.” Monteiro is using that valuable skill to negotiate the challenges of engineering a probiotic here in the lab at EWU.

By the time Monteiro finishes his senior year in the spring, he will have two years of research experience on his resume. That work, paired with his internship over the summer, has inspired him to move the University of Washington up to the top of his search for doctoral programs.

“The interesting thing about applying for a PhD [program] at UW is that you can work at Fred Hutch,” Monteiro says. “I really enjoyed that, I enjoyed the culture, I enjoyed Seattle—so for me, applying to UW makes a lot of sense.”

Eventually, after a doctorate and post-doctoral work, Monteiro sees himself continuing his research in academia.

“I think my final, end goal is to be a professor who can be a mentor,” says Monteiro. “A professor who can help people — like others have helped me — to accomplish their dreams.” His mentors see the same path. “Marcos has a way of explaining biology in a way that makes sense to others,” Ochoa-Repáraz says.

Monteiro is currently using that skill to tutor math and chemistry students. But his influence at Eastern goes much further, especially now that he’s got a Goldwater Scholarship in his hand. “I think this is a way to open doors for other people as well, to show an example, like myself, an immigrant who went to community college, that Eastern can do that for them,” he says.

Monteiro says he couldn’t have become Eastern’s first Goldwater Scholar without the help of numerous EWU faculty and staff members. He points to two in particular who have played a key role: Joanna Joyner-Matos, head of Eastern’s S-STEM program, and Christina Torres García, director of EWU’s McNair Program.

The “Scholarships in Science, Technology, Engineering and Mathematics” (S-STEM) program is funded by the National Science Foundation. Its goal is to allow STEM students to focus on their studies rather than on paid employment. Joyner-Matos also serves as an advisor and mentor to S-STEM students, encouraging them to seek out research opportunities and other scholarships.

The Ronald E. McNair Scholars Program, named for the astronaut and physicist who died in the Space Shuttle Challenger explosion, helps talented first-generation, low-income students, as well as underrepresented minority students, pursue the types of research and scholarly activities they’ll need to gain admission to, and eventually succeed in, their chosen doctoral programs. Monteiro credits Torres Garcia and the McNair Program with steering him toward research.

It’s a path that Castillo and Ochoa-Repáraz want other students to know is possible for them at EWU.

“This shows students that they can do research at Eastern to help them advance or start their careers,” Ochoa-Repáraz says. “Students can have what they think is only available at larger institutions.” Students can do research, have more access to their professors and enjoy smaller class sizes at Eastern, adds Castillo. “It’s all just this big community of support,” she says. “We need to keep it going.”

For his part, Monteiro is sure his path to success can indeed be replicated by other student researchers, and even expanded to future generations. “This will be good for other people to see that they can do it as well,” says Monteiro. “Eastern has a good program. Hopefully this means more people will come here to do science.”