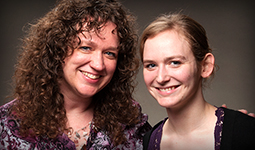 Many students have the desire to earn a degree but lack the financial support to make it happen. When a mother and daughter attend EWU at the same time, the burden on the family budget is doubled.

“I’m certain I would not be able to afford college without the scholarship I received from Eastern,” Amy Meyer said. “This gift from donors enables education, relieves financial stress, and it sends the message that you believe in me. Your investment indicates someone believes in the efforts and dedication I have put into my degrees. It has bolstered my self-esteem and emphasized that there is a community of educated people who believe in what I’m doing. I want to thank donors for standing behind me. The best way to beat poverty is education. I thank donors for helping me model that to my kids.”

Her daughter, Querida, agrees. “Without scholarships, I would not be at Eastern,” she said. “My parents have not been able to send my siblings or me to college, though it’s always their desire for us to go.”

Although Amy waited to enroll at EWU until her children grew up, her ambition to succeed is full steam ahead. She pursued a double major in journalism and graphic design. For two years, she was editor of EWU’s weekly student newspaper, The Easterner. “Working at The Easterner was challenging and rewarding,” Amy said. “I’ve loved coaching students. I hope and pray that I find a job where I can continue to help people improve as planners, managers, writers, designers, and editors.”

In the summer between graduating from high school and starting EWU classes, Querida worked in Alaska with children in a Salvation Army program. In her first year at EWU, she studied music and performed in the elite Wind Ensemble. She was a lifeguard and camp counselor the next summer.

“As I gained more experience, I discovered my passions,” Querida said. “I found I love teaching children, and I possess compassion and desire to help those in need. In 2010, I spent 10 days in Guatemala to reach out to rural villages and an underprivileged school.” She and her group provided medical and dental care, shoes and food to impoverished families.

The following year, Querida studied Spanish and then traveled to Ecuador for the summer to teach music, math, biblical studies, and swimming, creating the curriculum along the way. “It was an exciting experience I will never forget,” she said. “There is still so much to learn and do and so many people to help and teach.”

Scholarships well spent, classes completed and accomplishments in résumés Amy and Querida graduated together on June 15, 2013, at the Eastern Washington University Commencement.