Hannah Seagrave, 21, says, “Success is not how high your GPA is or how many years it takes to gain a diploma, rather it is a valuable accomplishment because success means you did your best in all aspects of life.”

Barbara Shields didn’t plan to use her degree from Eastern Washington University to land a job or even advance her career at Pacific Northwest Bell. After all, in the three decades she worked there, she had moved up from long-distance operator to personnel consultant and employment interviewer. She loved her job. Barbara also loved to learn.

Nearing retirement, Barbara took the telecommunications company up on its tuition reimbursement program that encouraged employees to obtain college degrees. She looked into Eastern’s Portfolio Development Course in the Interdisciplinary Studies Program. EWU accepted her credits from classes she took years before at Spokane Community College and Washington State University, and awarded her credits for work experience.

In 1992, Barbara earned her bachelor’s degree in general studies. She retired from the phone company after 35 years of service, but retirement didn’t mean all rest and relaxation to the new college grad.

Barbara also wanted to help EWU students pursue successful careers and contribute to society. “EWU Foundation was in my will,” Barbara said, “and when my broker suggested a charitable gift annuity that would pay a substantial amount every year, I decided to endow a scholarship while I’m still alive to see students benefit from it. It makes me feel good to see deserving students who work hard get a little hand up.” 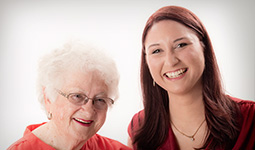 Hannah Seagrave is one such student. She chose EWU because her father is an alumnus and she wanted to pursue her dream of teaching Spanish. “However, I fell in love with communication studies in my junior year,” she said.

At 15, Hannah enrolled in Running Start. Introduction to Speech was a required course. “Previously, I had avoided public speaking,” Hannah said, “but I became much more confident through that class and really fell in love with the many facets of communication studies.”

She enrolled in more communication and visual communication design courses, and eventually switched her major to communication studies. After earning her bachelor’s degree in 2013, she was hired as a project manager at a tradeshow exhibit design company. Due to Barbara’s generosity and a graduate student assistant position, however, Hannah was able to leave that job and begin her graduate studies just months after receiving her BA. “Now I teach the introductory communication course I fell in love with years ago.”

Like Barbara, Hannah is dedicated to community service. “I have always had a passion for serving others,” Hannah said. “When I was younger, I saved part of my earnings in an envelope labeled ‘OLD PEOPLE MONEY,’ which I donated to elderly folks in need. A few years ago, I volunteered at Cheney Assisted Living. I completely fell in love with the residents and enjoyed listening to stories about how life was ‘back then.’ Shortly after I left, one resident I visited every week passed away. That taught me how precious life is and to treasure every moment we are able to invest in others.”

Fluent in Spanish, Hannah has served as a Bible camp team leader for multilingual, socio-economically diverse children; volunteered to serve meals, distribute care packages and collect donations for charities; used her communication skills to meet the learning styles of orphans in Haiti; and volunteered as a food handler and restocked items in her church’s food pantry, which serves refugees and the poor in the community.

At EWU, Hannah worked during her undergraduate years as a tutor in the Math Lab and Academic Support Center. “I greatly enjoyed assisting my classmates in achieving success,” Hannah said.

Barbara couldn’t be happier because that is what the Barbara Shields Graduate Scholarship is all about.