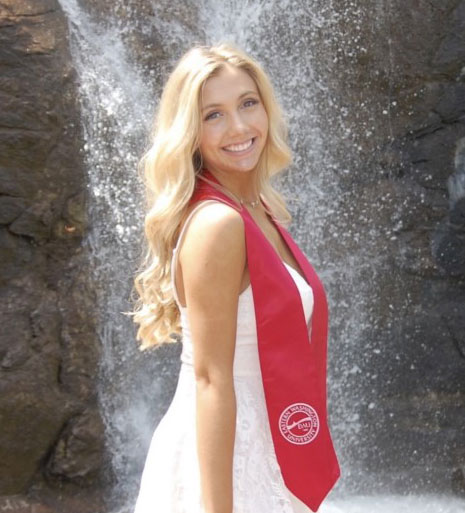 Jenny Brunner was dealing with declining health and an undiagnosed heart condition when an email arrived announcing that she was being awarded a Bright Promise Scholarship.

“I just thought it was the coolest thing. I was so excited,” recalls Jenny, a 20-year-old from Spokane Valley who arrived at Eastern Washington University with two years of Running Start credits under her belt.

The half-tuition scholarship arrived just in time to help Jenny finish her senior year and graduate with the class of 2022.

“My health was getting worse. Before I was even diagnosed, I was at the point where I was too unhealthy to work anymore,” she says.

“Between the academic scholarship I got from Eastern and the Bright Promise Scholarship, that covered everything. I didn’t have to work at all, which was really amazing.”

Since its launch in 2008, the Bright Promise Program has helped more than 300 EWU and Community Colleges of Spokane students earn their degrees. Spearheaded by Associated Industries and its CEO, Eastern alumnus Jim DeWalt, in partnership with Seattle-based Advanced Professional Insurance and Benefit Solutions and its president, Keith VanderZanden, the fund provides half-tuition scholarships to students earning degrees in education, health sciences, business, technology and manufacturing.

When the scholarship arrived, Jenny was in the midst of a medical crisis that resulted in a dozen visits to the emergency room, some 50 doctor and specialist visits, multiple scans and five weeks of wearing a heart monitor 24-7.

Finally, Jenny was diagnosed with supra ventricular tachycardia and postural orthostatic tachycardia. She underwent a first heart surgery in April – and didn’t miss a beat in earning her Bachelor of Arts degree in finance and marketing in June. Just days after donning a cap and gown, she underwent a second heart surgery. Throughout the entire ordeal, Jenny missed just one class.

With plans to become a wealth advisor and establish her own practice, Jenny appreciates the scholarship support that helped her realize her goal of a debt-free degree.

“It was definitely empowering,” Jenny says, adding, “It was a bright thing at a bad time.”