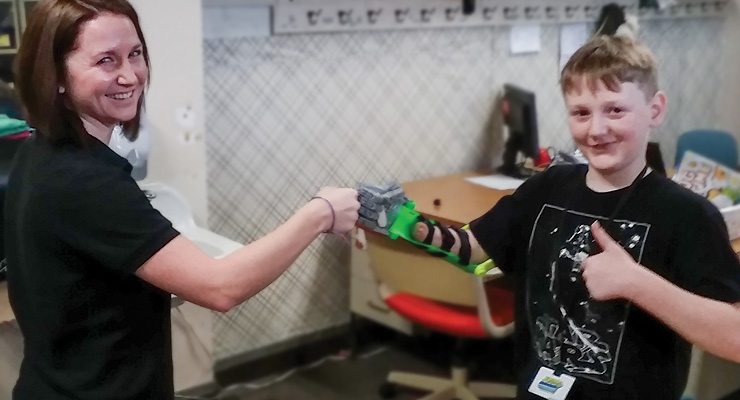 Last week, a team from EWU’s Engineering Department presented a 3-D-printed prosthetic arm to a fifth-grader at Spokane Public Schools.

Spokane Public Schools approached EWU with the idea of building a prosthetic for Strom after reading a New York Times article about 3-D hand printing, beginning the partnership that would change Strom’s life.

“When they asked, they said can you build this kid a prosthetic hand? I said that’s a lot of work, that’s a lot of trial and error,” Gerlick said. “When you build something in engineering, you build it a few times. The teacher said there are already plans out there, they’re all over the world.”

The team used an open-source 3-D design to print the prosthetic for Strom, and De Abreu and Kellam volunteered their own time to finish building it. The entire process took about three days of involved off and on time.

“I’ve tried twice before to get into the career of making prosthetics for people, and third time is a charm,” De Abreu said. “Now I get to give a better quality of life to a child.”

The maximum cost to make the arm was under $50, making 3-D-printed prosthetics an affordable option, particularly for children.

“The big challenge is the kid grows, and then it doesn’t fit him, so if you spend $100,000 on a prosthetic this year, then you have to do it again next year,” Gerlick said. “This is a really cheap fix.”

Strom was able to personalize his prosthetic and pick his own colors for the design. He’ll give feedback to the EWU team so they can continue to improve and update the prosthetic device plans.

In the meantime, Strom figured out the arm quickly – he was able to hold an orange with the prosthetic and used his other hand to peel it.

Looking to the future, the team hopes to continue with collaborative projects that impact the surrounding community.

“It’s on my list to do – to start giving back to the community in this way,” De Abreu said about creating designs to print using a 3-D printer. “But right now, I’m doing the easy thing – printing something for a child.”