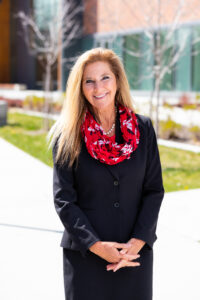 As president, Shari McMahan, PhD, is the principal administrative officer of Eastern Washington University  and has general supervision of all operations and programs of the institution. The president carries out the rules and regulations established by the EWU Board of Trustees and state law.

Shari McMahan came to EWU after serving  as the provost and vice president for academic affairs at California State University, San Bernardino, since 2016, and was the first woman provost in CSUSB’s history.

Prior to joining CSUSB, McMahan served as a faculty member and administrator for 16 years at California State University, Fullerton, most recently as deputy provost. In this role, she managed a wide and impressive portfolio, including enrollment services, academic operations and finance, institutional research and analytical studies, research, creative activities and technology transfer, university library, faculty affairs and records, the Faculty Development Center, online education and training, satellite campus operations and initiatives, and the Center for Excellence in Supplemental Instruction.

Prior to her role as deputy provost, McMahan was dean of the College of Health and Human Development at California State University, Fullerton, where she managed the departments of child and adolescent studies, counseling, health science, human services, kinesiology and social work, as well as the CSUF’s School of Nursing and its Military Science Program. In addition, she oversaw the development of the university’s doctor of nursing program and its centers for sports performance, autism, and boys and men.

McMahan joined CSUF in 2000 as an associate professor in the Department of Health Science. Through the years, she served in a myriad of leadership roles. They include: interim associate vice president for research, creative activities and technology transfer; director of graduate studies; and associate vice president for faculty affairs and development. She was also a professor and founding chair of the CSUF’s Department of Health Science.

She has been awarded more than $5 million in external grant funding, authored more than 50 peer-reviewed publications, delivered  dozens of scientific and community presentations, and served on numerous professional task forces.

McMahan, a first-generation college student herself, has both a bachelor’s degree and a doctoral degree in social ecology from UC Irvine, and a master’s degree in health science from Cal State Northridge.

One of our strategic planning initiatives is to work toward the federal designation of an Hispanic Serving Institution (HSI). For an institution to qualify as an HSI, it must have at least a 25% Latinx/Hispanic student population.

The Catalyst serves as the hub of innovation, bringing EWU students and faculty together with local business and industry experts in this state-of-the-art space never before seen in our area. EWU is pushing the creative and high-tech vitality of the region forward by forming these robust public-private partnerships to solve real problems.

The Prairie Restoration Project is a plan that will restore EWU farmland to native habitat and preserve natural land on campus that will foster research and educational opportunities, increase biodiversity, and provide recreational space on multi-use trails.

Within the Lucy Covington Initiative, emphasis areas have been identified: supporting future leaders; creating a confluence of culture and causes; and development of a Lucy Covington archives.