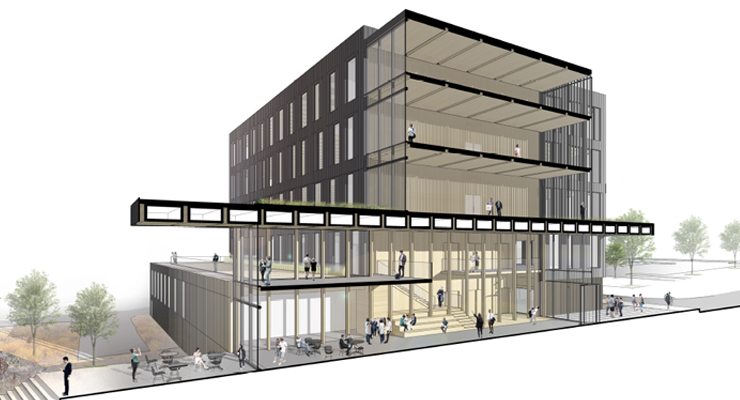 Avista Development's planned Catalyst Building in Spokane's University District will feature Eastern Washington University as the primary tenant, opening the doors for EWU to be an innovation hub connecting students to the regional business community.

Eastern Washington University’s role as the primary tenant in the innovative Catalyst building will result in a $5 million gift from the two companies behind the innovative project in Spokane’s University District.

The planned Catalyst building is funded by Avista Development and South Landing Building A, LLC, which includes two long-time McKinstry executives. As part of the agreement to move three of its STEM-related programs into the building, Eastern’s rent will be reduced by a $500,000 gift every year over 10 years for a total of $5 million.

“EWU is very appreciative of Avista and McKinstry for this generous contribution, which is the largest single gift in our university’s history,” says EWU President Mary Cullinan. “Without their support this move wouldn’t be possible, and Eastern can now focus on growing these degree programs both academically and financially.”

As the main Catalyst tenant, EWU will be moving three programs from its College of Science, Technology, Engineering and Mathematics (CSTEM) to the Spokane location—its computer science, electrical engineering and visual communication design (VCD) programs.

The lease agreement calls for developers to provide EWU with more than 57,000 square feet of space that is fully finished and ready to take possession of by July 1, 2020. Eastern won’t begin paying rent until Jan. 1, 2021. The university is also responsible for providing the furnishings, fixtures and equipment for the spaces it will occupy.

The Catalyst building agreement also calls for the developer to provide EWU with an annual $50,000 gift for faculty and student research, and developing at least five internships for students each academic year.

Eastern will also be allowed to secure naming opportunities and equipment donations for its labs and classrooms in the new building.

By relocating programs from its CSTEM, the university hopes to increase the capacity of the regional workforce in key areas of engineering, computer science, data analytics, digital media and tech commercialization and transfer.

For more information on the Catalyst, visit catalystspokane.com.