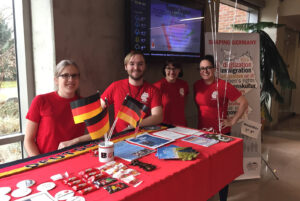 As part of the Federal Government of Germany’s campaign Wunderbar together, EWU hosted a campus week filled with events and activities exploring the topic of Integrating Immigrants. The Wunderbar together campaign runs through the end of 2019 and focuses on the deep-rooted ties between the US and Germany.

The campus week, which ran from Nov. 5-9, was sponsored by the German Embassy in Washington DC and the College of Arts, Letters & Education at EWU. Senior Lecturer and Program Coordinator for German, Jody Stewart-Strobelt applied for the funding and organized the week to coincide with the 25th anniversary of the EWU-University of Passau exchange program.

Events included a week-long exhibit in the JFK library depicting lives of immigrants in Germany since WWII, a talk on populism in Germany by Professor Karsten Fitz of the University of Passau, a reception for alumni of the exchange program, several film screenings, a talk by the German Embassy representative Claudia Schneider, and a panel discussion with on Immigration in Germany.  EWU Philosophy professor Kevin Decker moderated the panel discussion which featured short presentations by panel members Karsten Fitz and Claudia Schneider along with EWU professors Ann Le Bar and Kristin Edquist. 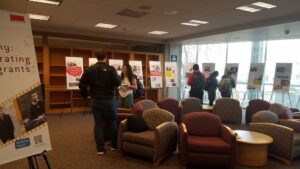 An original video created by Stewart-Strobelt and her students during their month-long faculty-led study abroad in Passau this past summer was also shown. The video showcased interviews with several refugees/immigrants living in Passau and was also featured in the library exhibit.  The German club and the School of Global Learning hosted Kaffee Klatsches throughout the week in the School of Global Learning lounge in Hargreaves for students to drop in and get to know what the German program at EWU has to offer. The campus week was wunderbar indeed!