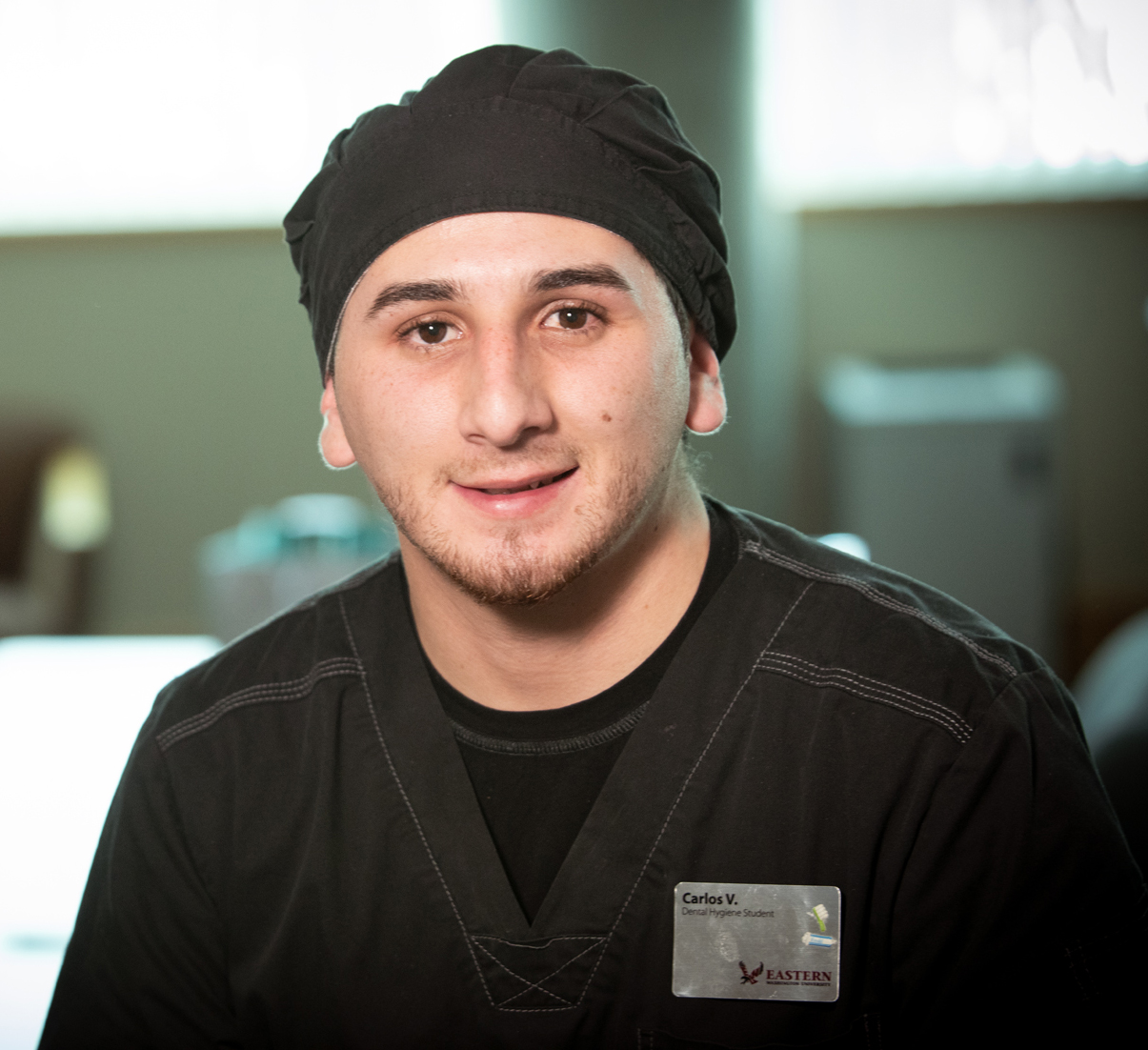 Eleven years after leaving his dangerous, crime-ridden hometown, 22-year-old Carlos Valdovinos, EWU senior in the Dental Hygiene Program, is thriving. He is studying for national board exams, gearing up for graduation and looking forward to a future of making a difference by providing direct care to patients.

Not long ago, as a high school student, his sister Angeles encouraged him to enroll at the Yakima Valley Technical Skills Center to earn a certificate in dental assisting. While earning that certification, Carlos realized that assisting was the wrong job in the right profession and began exploring other possibilities.

“As soon as I saw what a dental hygienist does and how big of an impact I could bring to a diverse patient population, I just fell in love with hygiene,” says Carlos, who enjoys coaching people on the importance of oral health to overall health.

When Carlos toured Eastern and learned more about the Dental Hygiene Department, now celebrating its 50th anniversary, he applied right away. In addition to offering a bachelor’s degree in his chosen field, the campus just felt right. “I liked the environment, and I liked the diversity and the overall positivity of the school,” he recalls.

Eastern’s admissions team connected him with scholarship support, says Carlos, adding, “I would have never been able to get my education if it had not been for the donors who helped me financially.”

Eastern proved to be the perfect choice for the first-generation student from Coalcomán Michoacán, Mexico, who pursued opportunity and stayed the course through harder times than most can imagine.

When Carlos was 11 years old, his parents sent him to live with his older sister, Jovita, in Yakima, Washington. They made the tough decision because their community, a city with a beautiful culture located in central-western Mexico, was overrun by drug cartels. Shakedowns, kidnappings, murders and corruption were becoming more common, affecting individuals and families living in the area.

“It was pretty common for us as kids to see big trucks coming down the road loaded with guns and men, or multiple funerals all over for unknown reasons” he says, adding, “There was just violence all around us.”

Throughout his four years at Eastern, news from home reflected the deaths and disappearances of his childhood friends. He also lost family members along the way. All the while, and throughout a pandemic, he longed to return home to help.

“I’ve had moments where I just feel down and I feel like I don’t belong here. There was always a feeling of uncertainty. And, I really miss my family because of a lot of other things that are going on,” Carlos says.

He credits Lisa Bilich, professor and chair of the Dental Hygiene Department, and other faculty and staff with offering unwavering support: “The faculty here have helped me calm myself. [They] reminded me why I am here, the friendships I’ve made here and all important things that have happened along my journey which led me here – and to just keep moving forward.”

The dental hygiene team helped Carlos find his way academically, too. Carlos, who learned advanced math as a fifth-grader in Mexico, sometimes faced challenges with reading and test-taking as an English-as-a-second language student. Bilich and the team connected him with a mentor and a study group. As always, Carlos worked hard alongside classmates and embraced opportunities.

At the EWU Dental Hygiene Clinic, Carlos and nearly 80 other students provide care for less advantaged members of the community. Carlos honed remarkable provider skills there – earning praise from patients of all ages. He also developed a passion for restorative care. His leadership abilities emerged, and Carlos now serves as president of the Student American Dental Hygiene Association (SADHA).

On May 6, Carlos will make family history as he becomes the first among his 10 siblings to graduate from college. His proud mother will journey from Mexico to attend the commencement and congratulate her son after many years apart.

“I decided to pursue an education to hopefully change the future for other generations,” Carlos said. “I feel like I am a positive role model for my family and friends. My biggest hope is that more will decide to find their true passion that will change the course of their lives for the better. ”

If you’d like to explore options for supporting scholarships for hardworking students in this program, please visit the Dental Hygiene Giving Opportunities webpage.

Ruth P. Class of 2023 is chosen to represent District XII