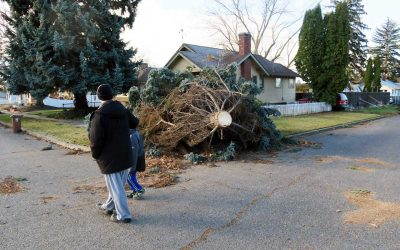 MPH student Jared O’Connor says he didn’t get much sleep in the wake of the epic windstorm that swept through Spokane and North Idaho on November 17th, 2015.

That’s because he was up in the early hours of the morning and late into the night updating a Google Map he’d developed that showed Spokane area residents the locations of shelters, schools, public libraries, and grocery stores that were open in the days after the storm when much of the area had lost power. His map also tracked the locations of the Duracell truck that had arrived in Spokane days after the storm to provide free batteries and power charges for area residents.

To fulfill his MPH program internship requirement, O’Connor happened to be interning at the Spokane Regional Health District in the Emergency Preparedness department when the storm struck. As it uprooted trees, took down power lines, and damaged property across the region, O’Connor says thought to himself, “I need to do something.”

He decided to start building his Google Map as a practical resource for the community. To him, it felt like a fairly minor way he could quickly contribute to the Regional Health District’s emergency response efforts.

To his surprise, his little map quickly became a big deal to many community leaders who were coordinating the region’s efforts.

O’Connor suspects that, at first, people started discovering it while searching online for places of shelter open in Spokane after the storm. Quickly, though, the map was shared on local news, cited by the Mayor’s Office and the Spokane County Sheriff’s Department, and added to the Regional Health District’s website.

“It picked up a lot of momentum and people just started viewing it a lot,” said O’Connor.

O’Connor said he spent a lot of time in the week after the storm monitoring openings and closures of area facilities and resources and updated the map throughout each day as he got new information. He said he started being included in high-level conversations about the emergency response efforts among community leaders as a result of his work on the map.

O’Connor is now in his final semester of EWU’s MPH program and has already been hired as Health Education & Emergency Preparedness Specialist for the Washington Poison Center. He’s based in the Spokane Regional Health District offices and works among the same people he worked with as an intern.

He credits his experience during his internship and the accolades he received for his work on the map as the key factor in getting hired in a public health career a few months ahead of graduation.

“My boss [at the Spokane Regional Health District] just raved about me,” he said. “She gave me awesome references.”

For most Spokane residents, the windstorm was at the very least a temporary nuisance; for many, it was devastating. For those most vulnerable in the wake of the storm, O’Connor may have just been in the right place at the right time to make a difference.