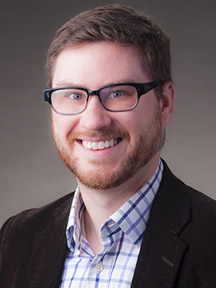 Drew Ayers, PhD is an assistant professor of film and director of the Film Program at Eastern Washington University, where he teaches, researches, and writes on the subjects of cinema, visual culture, digital technology, visual effects, and nonhuman theory. Before arriving at EWU in 2015, Ayers received his BA in classical languages from Carleton College in 2003, his MA in radio-TV-film from the University of Texas-Austin in 2007 and his PhD in communication (Moving Image Studies) from Georgia State University in 2012. The author of Spectacular Posthumanism: The Digital Vernacular of Visual Effects (Bloomsbury, 2019), Ayers’ work has also been published in Animation, Configurations, Film Criticism, and various edited anthologies. He also serves as a board member and programmer for the Spokane International Film Festival.