Washington Gov. Jay Inslee has signed a proclamation declaring Saturday, Jan. 5, as Eastern Washington University “EAG” Day in recognition of the Eagles playing in the NCAA Division I Football Championship in Frisco, Texas.

Eastern will take on the North Dakota State University Bison in a clash of Football Championship Subdivision (FCS) teams beginning at 9:04 a.m. PST.

The proclamation highlights Eastern’s various accomplishments over the last year, such as its contributions to the professional workforce and vibrant economy in the Spokane region through its commitment to student success and investments in projects like the new Catalyst Building in Spokane’s U-District and Interdisciplinary Science Center in Cheney.

Gov. Inslee also applauds Eastern’s commitment to diversity with the recent celebration of the 50th anniversaries of both Africana Studies and American Indian Studies at EWU, as well as national recognition with the Higher Education Excellence in Diversity (HEED) award.

The declaration also notes how EWU’s student athletes won the Big Sky President’s Cup for athletic and academic success, and highlights the football team’s exceptional season as it heads into the FCS national title game.

Football fans around the state of Washington are encouraged to proudly wear their Eastern Red and cheer the EWU football team to victory as part of “EAG” Day. 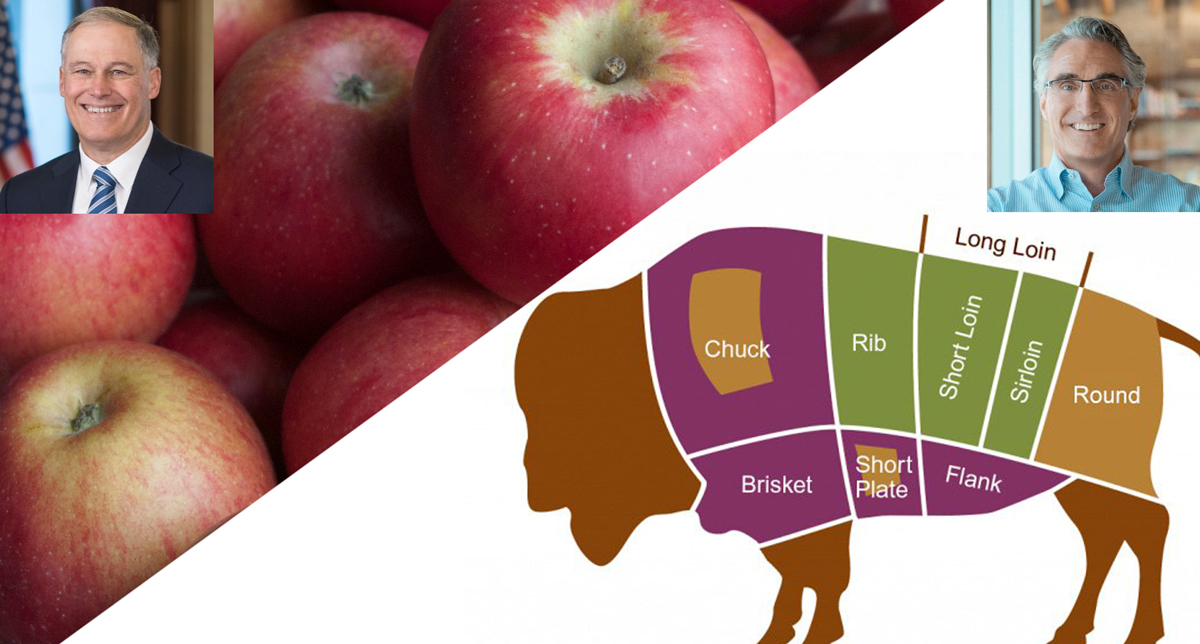 As the North Dakota State University Bison football team prepares to take on the Eastern Washington University Eagles in the FCS championship game on Saturday, North Dakota Gov. Doug Burgum and Washington Gov. Jay Inslee have raised the stakes with a friendly wager.

Inslee wagered three items for a possible Bison win: a box of Washington’s famous apples from Hansen Fruit and Fuji Apple, Lavender Dry Sparkling Soda from the Seattle based Dry Soda Company, and an assortment of candy from Liberty Orchards–which is home to the famous Aplets and Cotlets. These items would go to North Dakota’s Great Plains Food Bank.

“Washington has the best apples, hops, shellfish and wine,” Inslee said. “While Bison are majestic creatures, nothing swoops like an Eagle. Red and white just fight, fight, fight, and Eagles will win the victory!”

“Washington and North Dakota are both agricultural juggernauts, but only one of these football powerhouses can harvest the FCS national championship trophy, and Bison Nation won’t be denied,” Burgum said. “Good luck to the Eagles, whose narrow victory over the Bison in the 2010 FCS quarterfinals still stings – though six national championships since then has certainly eased the pain. Go Bison!”

“WHEREAS, Eastern Washington University (EWU) is our regional, public four-year baccalaureate university that recently celebrated Giving Joy Day- encouraging alumni and the community to give and spread joy throughout our region – and reaffirmed their commitment to student success through the investment of the new Catalyst Building in Spokane’s U-District and Interdisciplinary Science Center in Cheney, furthering the development of a professional workforce and vibrant economy for the Spokane region; and

WHEREAS, EWU celebrated the 50th anniversaries of both Africana Studies and American Indian Studies at EWU, received national accolades with the Higher Education Excellence in Diversity (HEED) award, and was named a College of Distinction; and

WHEREAS, EWU’s student athletes won the Big Sky President’s Cup for athletic and academic prowess yet again, and their football team has had an exceptional season,_tearing through the Big Sky Conference, Quarter and Semi-finals playoff games and taking an outstanding 12-2 record into the NCAA Division I FCS Football Championship Game to be held in Frisco, Texas;

NOW, THEREFORE, I, Jay Inslee, Governor of the great state of Washington, do hereby proclaim Saturday, January 5, 2019, as

in Washington, and I encourage all people in our state to proudly wear their Eastern Red and cheer the EWU football team to victory.