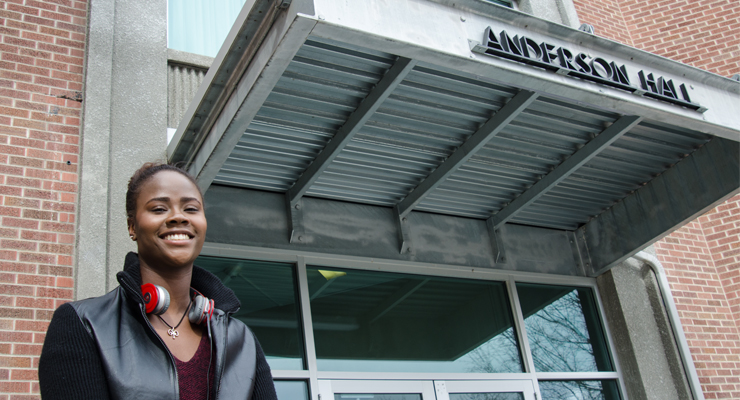 EWU student Celiann “CeCe” George was born in Montrouis, Haiti, a struggling tourist destination that has little else to bolster its economy.

Haiti’s history of devastating hurricanes and earthquakes has led to ongoing health issues, crime and the most extreme poverty of any country in the Western Hemisphere.

Haiti’s weak educational system makes it difficult for children to grow up to be successful. CeCe, her two older sisters and brother knew the only chance for them to attend school would be through sponsorships. 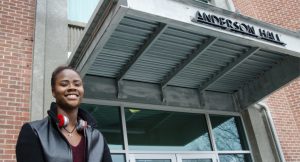 CeCe has seen photos of herself at a very young age in a militarized Haiti. Heavily armed officers who rolled through towns and marketplaces appeared in the background.

Fortunately, when CeCe was 5 years old and her brother was 7, they were adopted by an American couple. They settled as a family in Ferndale, Washington, where CeCe completed her K-12 schooling.

As much as her adoptive parents have done for CeCe, they cannot afford to help her with her university education.  While concentrating on her studies, she works part-time and depends on scholarships to attend EWU.

“I have come a long way from Montrouis, Haiti, to Eastern Washington University,” CeCe said. “And I would not be here without scholarships. In fact, many of us would not be at Eastern or finish our degrees without them. When you donate to EWU scholarships, you inspire all of us to succeed.

“Receiving a scholarship is like a stranger who understands and knows the struggles of a college student,” CeCe said. “It’s as if they are patting you on the back and saying, “Good job! The many days and nights that you’ve been so frustrated that you’ve cried while doing homework, and the coffee-infused, sleepless nights have not gone unnoticed. To reward you for hard work and good grades, here is a scholarship to ease your financial stress.”

After high school, CeCe obtained a community college associate’s degree and a certificate in criminal justice. She transferred to EWU to pursue a degree in sociology.

Years ago, CeCe saw a criminal justice TV show with a woman as the main star.

“I identified with her sassy, upfront, honest and persistent personality to catch fugitives and protect witnesses,” she said. “The show wasn’t real life, but it put crime-fighting and life-changing ideas in my head, and I have been working to make it a reality.”

CeCe’s ideal career would be to serve in the United States Marshals Service as a deputy marshal. “I am truly grateful to people like you who support scholarships to help me get there,” she said.