The award is particularly significant because it bears the name and support of Bill Youngs, an EWU professor of history who has made a difference at EWU for more than 50 years. 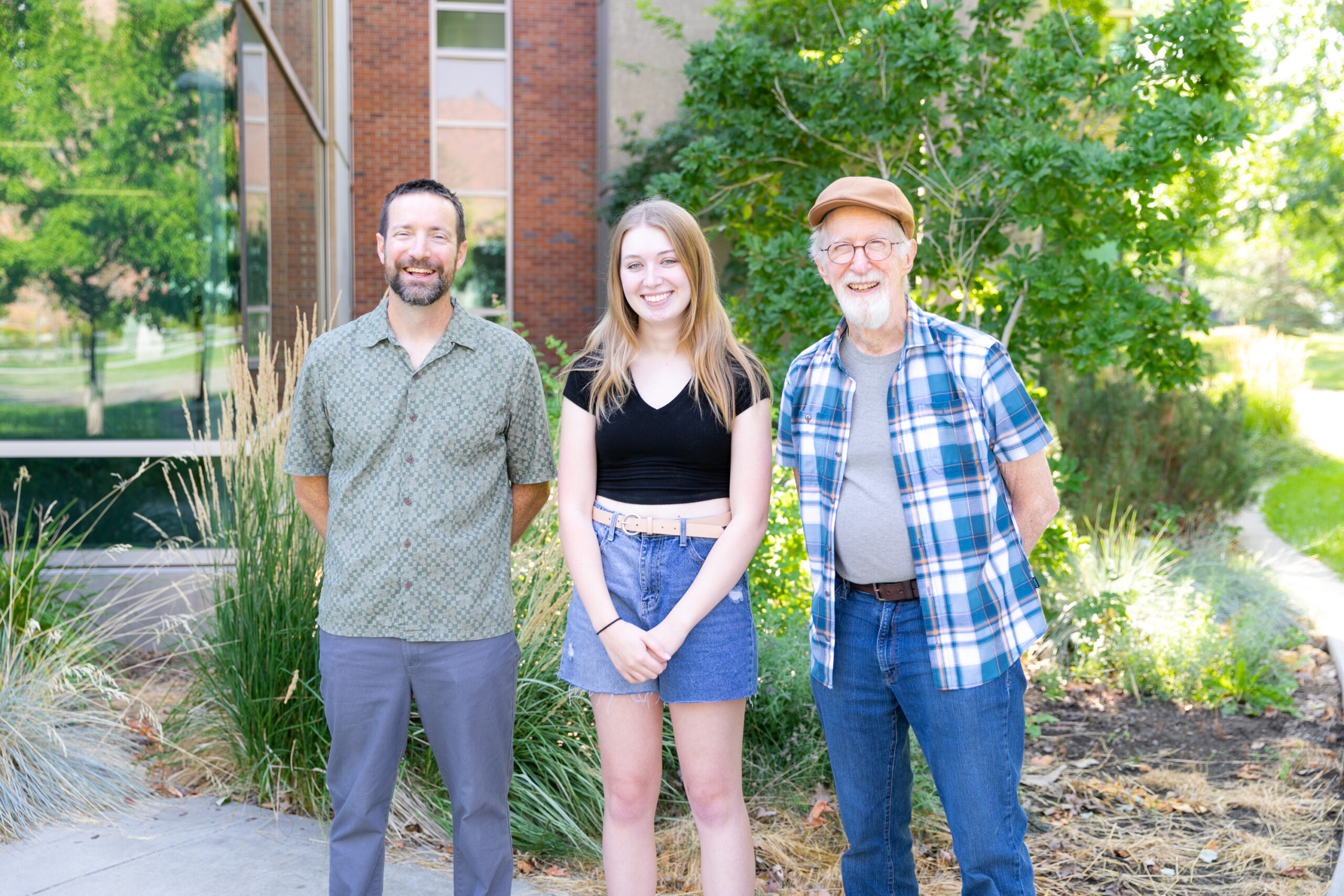 An EWU junior who is using West Plains groundwater flows to track possible contamination by chemicals similar to those found in fire-fighting foam at Fairchild Air Force Base is receiving the inaugural Clawson-Youngs Environmental Studies Award.

The award is particularly significant because it bears the name and support of Bill Youngs, an EWU professor of history who has made a difference at EWU for more than 50 years.

“I’m really honored to be the first one to receive it,” says Erin Toulou, a 20-year-old geosciences student from Colbert, Washington. Toulou, a USGS intern, says the research project aligns perfectly with her goal of working in the field of geotechnical engineering and hydrology. The environmental studies award is an inspiring pat on the back, she adds.

“The award has made me want to participate in more conferences,” Toulou says. “It’s going to give me an extra confidence boost to continue research in the hydrology field, and it will give me more opportunities to learn as much as I can.”

Two ’07 alumni, Mike Clawson and Alicia Kinne Clawson, a couple who met at Eastern and later married, started the Bill Youngs Endowment in 2020 to honor Youngs. He was an important ally for them while they served in student government and he was president of Eastern’s Faculty Council. Youngs inspired the couple and had a lasting impression on their lives.

Youngs, the second most senior faculty member at EWU, made generous gifts to expedite the full endowment of the that fund, which covers some expenses for student-related projects that include research and publishing. The Clawson-Youngs Environmental Studies Award reflects Youngs’ passion for the environment. (The Bill Youngs Endowment will soon be named the Bill Youngs Environmental Studies Endowment.)

The award provides a stipend at the beginning of a project and another when it is completed. It is open to environmental projects — research, creative works and community-based activities — that cover a wide range of environment-related disciplines, including but not limited to history, literature, theatre, anthropology, art, music, biology and geosciences.

Youngs plans to confer as many as eight awards in the upcoming year with hopes the awards will inspire students in their efforts to make a difference. “I am hoping for two things in particular,” he says. “First, some really exciting creative projects for the students. And second, real contributions to environmental health.”

Providing this award is a “great feeling” says Youngs, adding that “a lot of faculty and students at Eastern really care about environmental issues.”

Toulou is definitely a student who cares. With the help of faculty mentors Chad Pritchard, department chair and professor of geology, and Lauren Stachowiak, an associate professor in geosciences, Toulou will model groundwater flows east of Hayford Road to better understand how potential contaminants may migrate in the eastern West Plains, an area that encompasses Palisades Park.

Toulou’s research is particularly important as the poly-fluorinated alkaline substance (PFAS) is used in materials deployed during training exercises at Fairchild, but is also found in Teflon, GorTex and in some forms of packaging material. Exposure to PFAS at certain levels is hazardous, scientists from the EPA and CDC have determined, with potentially serious effects on human health — including some cancers, liver disease, low birth weights and other impacts.

PFAS has been found in both private and public wells across the country, including the West Plains, and Cheney. Mapping the full extent of potential contamination is crucial to identifying hotspots where groundwater is more likely to be impacted. In identifying such areas, affected residents and government regulatory agencies can test the water, as well as secure funding for new wells if needed.

The Clawson-Youngs Environmental Studies Award will inspire learning while helping students develop a professional identity, says Pritchard. “I think what this is really going to do is give people the confidence that their project is worthwhile. That in itself is impressive.”

To make a gift in support of The Bill Youngs [Environmental Studies] Endowment, visit EWU\GIVE.

Grief, College Students, and Why We Should Talk About it

Winter Check-In with Your Student

Winter can be a tough quarter for many students, as the thrill of fall has worn off and the weather tends to be drearier.