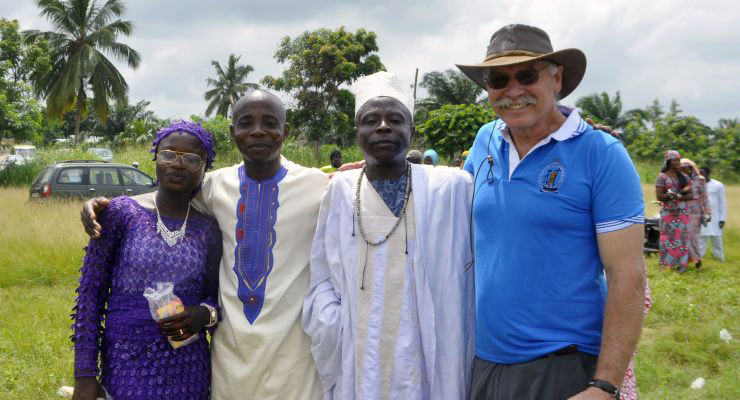 Romel Mackelprang has a rule for all of the students on his faculty-led study abroad program to Ghana: you can bring two bags. One piece of luggage is yours and the other is for the Ghanaian community.

Mackelprang, the director of disability studies at EWU and a professor for 30 years, has been doing humanitarian work in Sub-Saharan Africa for more than 10 years and has been involved with human and disability rights for much longer.

In 2011, Mackelprang began his faculty-led study abroad program to Ghana, introducing students in the Disability Studies Program to some of the community-based service projects he was involved with. The program continued the following year, but went on a brief hiatus until returning in June 2017, with its largest student enrollment to date.

Now combining the three academic disciplines of disability studies, psychology and Africana studies, Mackelprang along with Nick Jackson, PhD, and Scott Finnie, PhD, led 18 students and faculty on a two-week program to rural parts of Ghana.

In the town of Nsawam – roughly 25 miles north of the Ghanaian capital, Accra – the group stayed on the campus of the Catholic Orthopedic Training Center (OTC) for most of the trip. The center serves both adults and children who have orthopedic disabilities, while also featuring an orthopedic training college in which Mackelprang and Jackson have assisted in the development of the curriculum, providing donated textbooks, and in faculty development and training.

“The beautiful thing was that we had about a dozen Ghanian college students that essentially spent the full two weeks with us,” said Mackelprang. “So our students were living, not in hotels, no air conditioning, just living kind of as a middle-to upper-class Ghanaian would.”

Throughout the trip, Mackelprang and the students blogged about their various humanitarian work and provided insights into their personal reflections of interacting with African culture.

“We’re the only program that takes students to a developing country and live like locals. We don’t go to the hotels. We aren’t a tourist, sight-seeing organization. Students go from day one to living in the community. They are working alongside Ghanaians and we pick projects that really provide services to the community,” he said.

For children in the Otoase village outside of Nsawam, fetching water from the well nearly half a mile from where they live can take more than four hours and up to 10 treks, and the effects of the tiresome task seep into the children’s ability to perform in school. 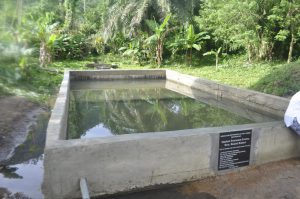 This is just one of the struggles the village has in maintaining a healthy water supply for everyone.

For the previous three years, Mackelprang has been working alongside village elders to help build a second adjacent well, and raise the walls of the well to more than double the overall water supply.

On June 22, the village celebrated the culmination of this water project with festivities, and even naming Mackelprang an honorary chief of the village.

“It was a pretty special day for the village in that they’ve grown dramatically in size, and as they’ve grown during the dry season, they’ve literally had to put guards there so that people don’t take all the water away,” said Mackelprang. “They’ve had to keep the tank kind of full to avoid health problems as the village has grown.”

However, for Mackelprang, this only marked the beginning of a bigger overall vision.

The well water they drink is untreated and hard to get to. At the celebration, Mackelprang and members of the village jointly committed to raise funds to invest in the village’s infrastructure. The plan is cover the well, treat the water and pump it straight to the village, and Mackelprang will match their fundraising efforts dollar for dollar along the way.

The idea behind Days for Girls – which began in a small orphanage in the outskirts of Nairobi and has grown to serve in over 100 countries around the world – is to provide women with hygiene kits to assist with menstruation.

EWU students and faculty have helped collect and haul more than 1,000 pairs of girl’s underpants, along with other materials to the village for the reusable kits that last up to four years. Along with donations from EWU faculty and other U.S. donors, $2,500 worth of cash and goods were raised for 250 girls in Nsawam.

However the value is not just measured in dollars, but in years of schooling. 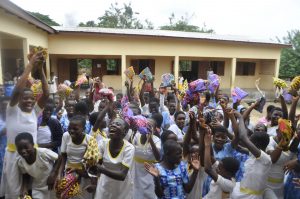 When girls begin menstruating, so does a cycle of missing school. This often leads to them getting behind in school, which is followed by dropping out of school altogether – perpetuating a cycle of illiteracy.

In total, they believe the Days for Girls kits helped retain more than 1,000 years of schooling for the girls in the village, along with providing job opportunities for Ghanaian women who are paid to make the kits.

“The other neat thing that we do with the money we bring in through the program, Bernice Akrah who heads the program, she uses it to pay Ghanaian women who otherwise have no income,” said Mackelprang. “She will train them to do it and then they make these kits. So they’re not only helping the girls, but the women who put the kits together have income and can live a decent life.”

About seven years ago, Mackelprang started his own nonprofit, Access Without Borders, to promote disability rights and societal access in developing countries.

Through his nonprofit, he’s been able to rally donors to support his many causes in Sub-Saharan Africa, including Days for Girls and the Otoase water project. With Mackelprang always paying for his trips, no salary and no overhead costs, anyone who donates to his nonprofit knows that 100 percent of the funds go to the projects.

“It’s a beautiful example of how a public university can use a private organization,” Mackelprang said.

Through his nonprofit organization and with the help of Brian Davenport in the Office of Community Engagement, Mackelprang and Jackson were able to procure 11 donated computers to give to the Notre Dame Health Clinic in Ghana. 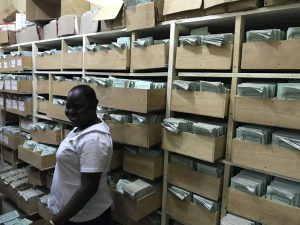 The clinic is small and the record filing system is done via pen and paper, all while providing health care for many of 80,000 residents in the Nsawam area. With the help of students transporting the computers to the clinic, Jackson presented the computers to the workers with the idea of digitizing their entire patient records archives.

“This will improve the quality of their health care dramatically,” said Mackelprang. “I mean we’re talking a large room, probably 25-by 20-foot room that is stacked from floor to ceiling with medical records.”

The donation of the computers was the first step in the process. Within the next three months, they will bring over a server and some optical scanners so they can then go through the process of digitizing the records into an electronic format and putting them on a server.

Also included in the two-week abroad trip was a trip to Cape Coast, where they visited the 500-year-old slave castles that were the vehicle for well over one million West African slaves to be sold into slavery. They also went on forest walk tour in Kakum National Park, where they got to walk about 150 feet above the forest floor.

“When our students first arrive in Ghana, and this happens to almost anyone who goes for the first time, what they see when they get there is the poverty and the lack of infrastructure,” said Mackelprang. “What they leave with is a love of the people, an appreciation of Ghana, an appreciation of the culture and seeing people that they value and respect. And many of them leave with some real emotions about the some of the things that Ghana has that we don’t in the United States. That I think is very valuable.”