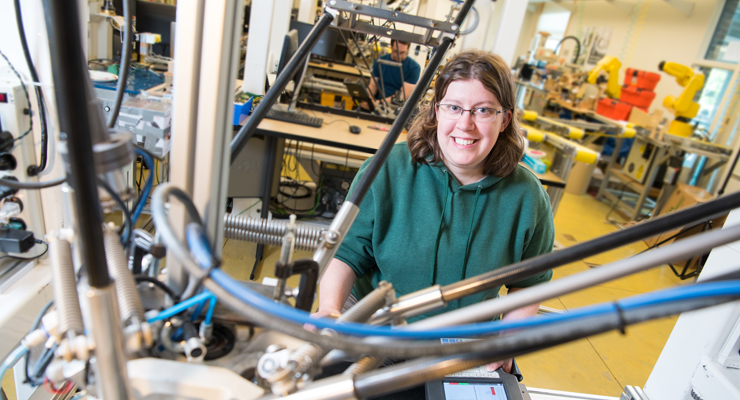 After earning her bachelor’s and master’s degrees, Leaf spent 14 years in the computer science field, working her way up through the ranks. Four of those years were spent at Microsoft as a senior program manager before deciding she needed a change in her career – she wanted to go back to school and earn her PhD.

Requiring specific classes and research to enhance her application, Leaf took undergraduate mechanical engineering courses and used Eastern Washington University’s state-of-the-art robotics lab and a research project on the NAO robot as a catalyst. She is now attending Oregon State University with a full-ride scholarship to pursue her doctorate in robotics. 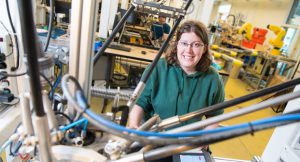 “Having the robotics lab here gave me the opportunity to not just take more classes, but to really get deep into working with robotics and start building up that background and expertise to show prospective grad schools that robotics is not just something I’ve read about in a book, but I’ve worked with real, no-kidding robots on real, no-kidding projects,” she said.

To be a competitive candidate for robotics PhD programs, applicants are urged to have a background in two of the three areas: computer science, mechanical engineering or electrical engineering.

Leaf’s educational and professional background was focused on computer science, and she used EWU’s robotics lab to get hands-on experience as an undergraduate. Eastern has the only industrial and automation robotics program in a three-state area for the bachelor’s degree in mechanical engineering.

In partnership with faculty members Robert Gerlick, PhD, and Don Richter, PhD, Leaf worked with NAO, a 2-foot tall robot that has 25 degrees of freedom, meaning it has multiple joints and directions it can move. It’s commonly used in conjunction with autism therapy for children.

“We’ve been able to advance all of these different branches of technology and engineering, and it’s at a point where you can start to bring that technology into an area where you can have a societal impact, like assistive technologies for people who are disabled or automating things that can be dangerous,” she said.

Leaf built an application for the NAO robot to read to children who have autism, with its purpose to act as a co-therapist. She created a working prototype to bridge the gap between therapists and children with autism. The app reads books and interacts with the children while the therapist controls the robot using a tablet.

Leaf’s project culminated in published papers, as well as a presentation at a conference for the American Society for Engineering Education. She said working with robots and the robotics lab at Eastern helped her get accepted into three PhD programs and move her career forward.

“I like the openness of Eastern,” she said. “They’re here to help anyone who wants to further their education. And having the robotics lab here ended up being a real difference for me because I could come in as an undergraduate and get hands-on experience. We have faculty that have knowledge in robotics and were able to supervise independent study projects for me. It gave me that opportunity to get research and independent study opportunities.”