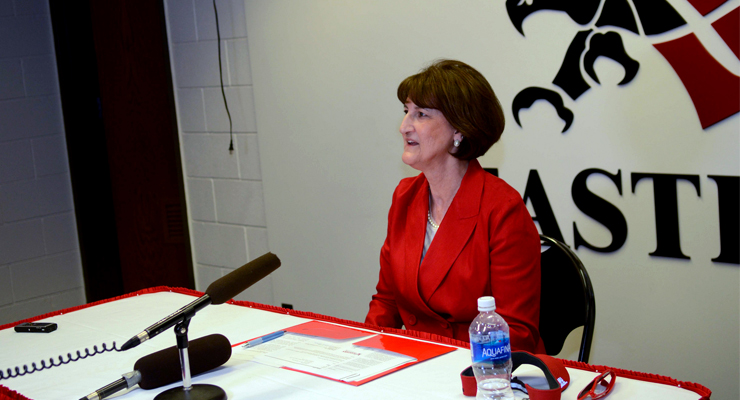 The interim tag has been removed from her title and Lynn Hickey has now become the permanent Associate Vice President/Director of Athletics at Eastern Washington University.

EWU President Mary Cullinan made the formal announcement and introduced Hickey Wednesday at Reese Court inside the Special Events Pavilion.

Hickey has served as interim athletic director since February when Cullinan tabbed the experienced administrator to oversee the department during a national search. That search produced 50 applicants from NCAA Division I institutions across the country, including Hickey.

“Lynn Hickey emerged as the ideal candidate to fill this important role at Eastern,” says EWU President Mary Cullinan. “During her time on campus she has also displayed excellent leadership skills and a vision for how to transform our athletics department into a model program.”

Before coming to Eastern, Hickey served as Associate Vice President and Director of Athletics at the University of Texas, San Antonio (UTSA) for 18 years. During her tenure, UTSA experienced unprecedented growth by adding football and women’s soccer and golf. Hickey also developed a student-athlete centered program that combined academic success, leadership development, strength and conditioning and life skills. Prior to UTSA, Hickey served as Senior Athletic Director and Senior Woman Administrator at Texas A&M, College Station.

Hickey’s track record is what stood out to the search committee, co-chaired by Provost Scott Gordon and EWU Board of Trustees member Judge James Murphy.

“Lynn brings a wealth of experience to the position of Director of Athletics,” says Gordon. “She has the perspective of being involved in athletics as a player, coach and longtime administrator and has been successful at every level and in every position. Her passion and expertise in the many key areas of athletics – hiring coaches, advocating for student-athlete welfare, community involvement, fundraising and compliance – set her apart.”

“The selection decision was extremely well served by a very diverse cross section of the EWU community thoughtfully considering and evaluating all candidates as well as providing the opportunity for input from all sectors at multiple public forums,” added Murphy.

President Cullinan thanked Gordon and Murphy as well as the effort of the search committee over the last two months. She also applauded the many faculty, staff and Eastern alumni and supporters who provided valuable input during the search process.