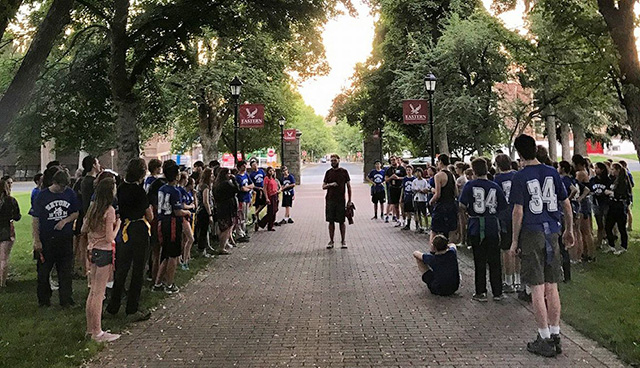 “We have kids telling us over and over again how important this experience has been for them because they finally come to a community of like-minded people and have extraordinary conversations,” said Mike Cantlon, Satori Camp co-founder and director.

Campers are able to participate in nightly activities, including capture the flag (seen above) and the Time Traveler’s Ball.

With few academic camps for kids in the junior high and high school age range, Cantlon and Bruce Mitchell, PhD, retired EWU professor and Satori Camp co-founder, set out to create a camp for gifted children – a safe place to be yourself while being intellectually challenged.

“My expectations when we started is simply we’re going to bring kids from small towns onto a university campus – gifted kids – and give them opportunities to try and see what the college campus was like,” Cantlon said. “It became so much bigger than that.”

Satori was based on the athletics summer camp model in which students participate in activities during the day, then spend time living on campus. Since its first summer in 1983, the camp has grown from 46 to more than 125 campers.

Participants ages 12-18 attend three mini-courses throughout the week, with a wide range of ungraded academic courses including parametric modeling and 3D printing to the philosophy of photography. Courses are taught by EWU faculty or local teachers in the Spokane School District.

Since Satori was started, the camp has been described as home for many – camp alumni often take a week of vacation from work to return and serve as a volunteer.

Sara Maleki ’02, associate director, joined Satori in 1993 as a camper and has come back every year (except one) since then.

With the 35th anniversary of Satori Camp approaching, Cantlon doesn’t plan on retiring as long as he’s valuable to the camp. He originally planned to end Satori after two years, but couldn’t due to the high demand and love for the camp.

“I thought at the end of maybe 25 years, I remember thinking I could retire,” Cantlon said. “But then I thought, I love the camp so much. I can’t explain that. The thing is that when you love something, you don’t want to lose it. It becomes a part of your soul. These students are parts of our souls.”

What does “Satori” mean?

Literally, the word Satori is Japanese for “Ah Ha!” It originally represented a state of enlightenment sought in Zen Buddhism.