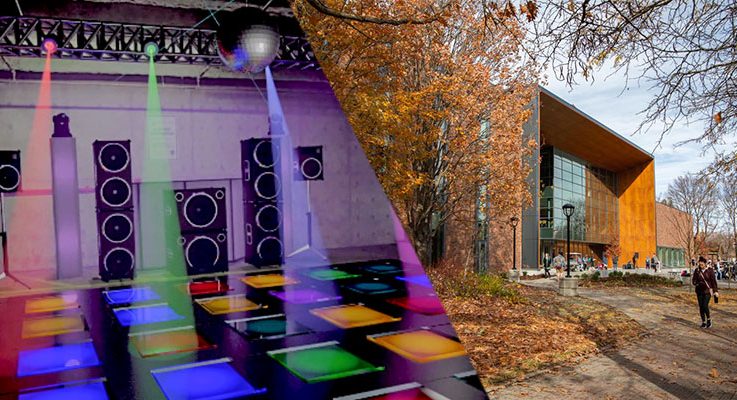 Cheney, Wash., APRIL 1 — Get ready to boogie in the basement, say officials from Eastern Washington University.

An EWU spokesperson announced Monday that during reconstruction of the university’s Pence Union Building (PUB) last summer workers inadvertently opened up what they believed to be an underground cavern beneath the structure’s community room. Further inspection determined the space was, in fact, a long-forgotten civil defense shelter.

Now university officials hope the university community will “get down on it” after having converted the subterranean space into a full-scale discothèque, a facility that will allow both students and pop-cultural scholars to gain a more sophisticated understanding of social forces driving the 1970s.

That the 7,500 square-foot space had been stayin’ alive for so many years was a shock to both construction workers and site planners.

“At first I was afraid. I was petrified. Kept thinking construction could not go on with this big hole inside,” said Rock Urboat, assistant director of EWU Facilities and Planning. After a brief look around, however, Urboat and his crew confirmed the Cold-War era relic was capable of becoming something of a funky town.

“Immediately we were thinking along the lines of how we can not only expand the footprint of the PUB, but what can we do to make it hot stuff?” Urboat said.

After alerting university administrators to the discovery, Urboat advised against making public news of the find. “People get crazy over this kind of thing,” he said. “Obviously we didn’t want to encourage anyone to get up and boogie until the time was right.”

While crews continued work on the visible portions of the PUB, a special task force quickly – and quietly – considered how the dwelling might best get its groove on. With no design or construction money available, team members knew they had to think outside the box. In this case, it was a juke box.

“Our team was having lunch at Eagles Pub when Love Train came on,” said Urboat. “We all looked at each other and thought – why not?” EWU’s President Mary Cullinan soon endorsed the idea. “That’s the way, uh huh, uh huh, I like it,” Cullinan said.

Some might wonder if construction of a disco in the year 2019 might be seen as, well, frivolous. But not according to one EWU expert.

“Disco is about more than gyrating to upbeat music from the 1970s,” says Rayon Pantsuit, an assistant professor in EWU’s recently established Department of Vinyl Studies. “It’s a continually-evolving cultural touchstone, one that allows scholars like me to more fully assess how certain subjective sensory qualities are, or are not, mediated via ‘loving the nightlife.’”

Pantsuit said the new venue also serves as a centerpiece for what he envisions as a living laboratory, a real-time observational outpost for recreating the look, the feel and “the hustle” of the disco-era.  He believes it serves both historical and educational purposes, and even plans to host field trips for area high school students looking to turn the beat around.

Just as video killed the radio star, if you haven’t realized it yet, the videos above are a clever illusion produced by Sr. Lecturer Brian Kamp’s 3D modeling and animation course. They used camera tracking and animation software to interlay 3D objects into handheld video, the same technique used for most Hollywood special effects.

Thanks to all of Kamp’s students for their work on this project, particularly those who worked on the two videos above (Jackson Newland, Ryan Houghton, Paul Lawler, Jesse Ross, Caleb Wilcox, Kobe Kupp and Paul F.).

Being well is defined differently for each individual.

How your student can create a community in college