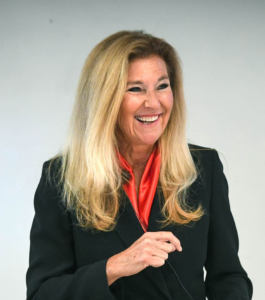 Shari McMahan, PhD, was selected by the EWU Board of Trustees to serve as the 27th president of Eastern Washington University on Feb. 24, 2022. She was selected among four finalists who emerged from a field of more than 60 high quality applicants.

McMahan previously served as the provost and vice president for academic affairs at California State University, San Bernardino (CSUSB). In making the selection, the BOT stated that her vast experience across all aspects of higher education, including her understanding of Eastern’s role as a regional university serving many first-generation students, makes McMahan a tremendous fit at the university.

The BOT is very grateful to the Presidential Search Advisory Committee (PSAC) for its feedback and assistance throughout the nearly year-long search process. In addition, board members reviewed more than 670 comments that were submitted through the portal on the presidential search website. The remarks and responses, which included reports submitted by various campus organizations representing faculty, staff and students, helped guide healthy, robust discussions that led to the naming of Shari McMahan as the next president.