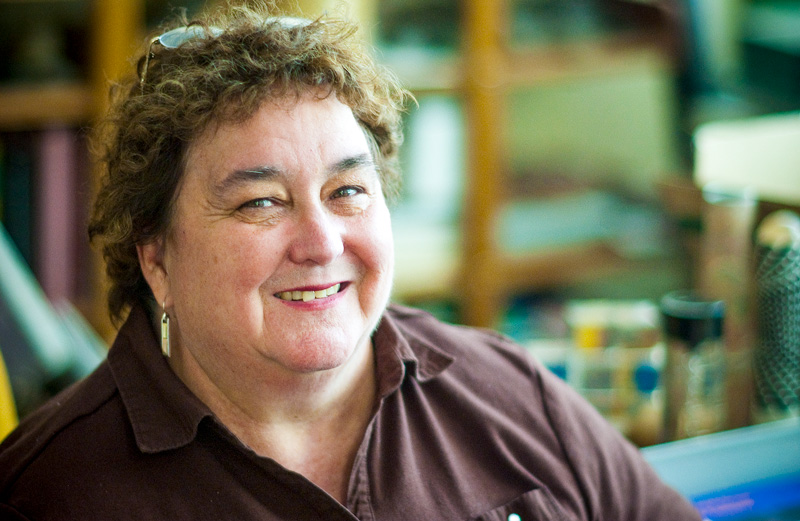 Sarah Keller never understood why people hated Mondays. She has always had a perfectly good time at work, teaching within the anthropology program she created in 1966. However, the academic journey for Keller – EWU’s most senior faculty – has now ended after 51 years at the university.

As a young woman growing up in Boston, Keller knew what she wanted to do early on in life, and for that she considers herself lucky. The hook came in the seventh grade after reading Digging in Yucatan by Ann Axtell, a 300-word personal account of the author’s expeditions reconstructing Mayan temples.

After earning her PhD from Harvard University, Keller’s tenure, at what was then Eastern Washington State College, began with her sending a telegram to the university to accept her new position. Keller described it as a seller’s market for anthropologists in those days, with smaller universities just beginning to adopt programs for anthropology. Other job opportunities to work in the deep South came to her, but she knew wanted to live in a place with four seasons and explore the West.

“I’m not a fan of Santa Claus in a bathing suit,” Keller said.

From there, Keller, in her 20s, went on to start the anthropology program at Eastern in 1966. She was tasked with designing the curriculum, hiring new faculty to take on different specialties within the field and teaching all of the courses at the start.

For reference, in-state tuition and fees had just increased to $88 per quarter, Hargreaves Hall was being remodeled for the new John F. Kennedy Library that was about to open, the student body population was roughly around 4,000 and the Vietnam War was at its height.

“I didn’t give young males Fs if they had a draft deferment because I didn’t think that it was worth getting killed because you didn’t know something about Australian Aboriginal culture,” Keller said.

One of the biggest challenges she had to face, especially early on, was simply keeping the program alive from multiple attempts to shut it down.

“Well in the early days, various state agencies – that are no longer around – tried to terminate us endlessly, to drop anthropology because they didn’t see the point.” Keller said.

She fought for the existence of the program by writing long treatises about the amount of students they had in the department, what students turned into and what accomplishments the students and faculty had contributed to the community. But what Keller really thinks saved the program was how much service work they did by teaching intro courses for general education.

In 2009, Keller became one of only 49 people who’ve received EWU’s Trustees’ Medal – the university’s highest form of recognition for faculty achievement.

“This surprised me very much,” said Keller. “They had kept it a secret and I was exceedingly surprised, so much so that it didn’t sink in for a while.”

What has motivated Keller to teach anthropology for over 50 years is quite simple, it pleases her to do anthropology.

“I’ve enjoyed my colleagues,” said Keller. “I’ve enjoyed most of the students, and every once in a while there is a memorable one. This is selfish on my part, but I’m most pleased by the students who became professional academic anthropologists. It isn’t that I’m not pleased with the others, many of them go on to do marvelous, wonderful things, but it’s a great pleasure to see your students do what you did and get PhDs and teach.”

In addition to teaching at EWU, Keller worked for many years helping law enforcement agencies and various local tribes identify bones. Much to her displeasure, her work as a forensic anthropologist has, at times, put her in the spotlight of the media. Being ambushed on site by reporters and seeing her work in The Spokesman-Review are two things she hates almost as much as flying – her greatest fear.

Growing up, Keller had what she describes as a typical middle class 1940s New England upbringing, where she attended boarding school and would go to Florida in the summers to visit where her father worked. As an only child, she enjoyed figure skating and ballet dancing, and as an undergraduate at Lawrence University, she acted in the first amateur production of Samuel Beckett’s Endgame. Judging figure skating competitions is now one of her hobbies outside of the academic realm.

Although Keller considers herself to have officially retired, come next fall, she still plans on teaching one class because she enjoys it. She also hopes do some traveling in the near future. Naturally, this won’t be by plane. Rather, she hopes to go on a Royal Caribbean Cruise with the destination still undecided.

“I do this because I love it,” said Keller about why she’s been teaching at EWU for more than 50 years. “And you’re a lucky person if you get up every morning and you want to go to work.”