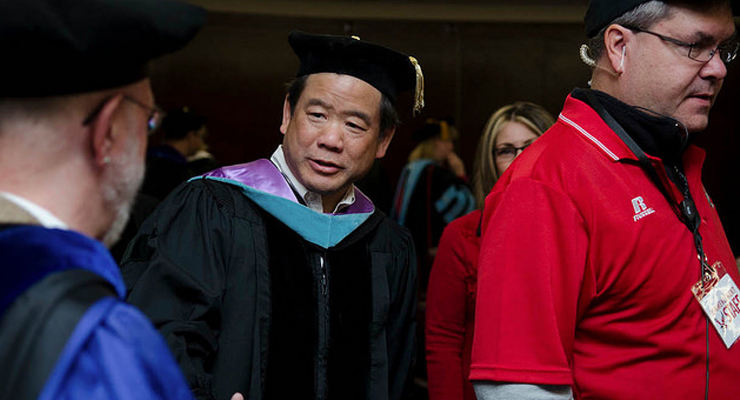 When asked to reflect on his 15 years as a member of the Eastern Washington University Board of Trustees, Paul Tanaka’s thoughts go to the first-year students now on campus.

“Some of this year’s freshman class were only four or five years old when I started,” states Tanaka. “Aside from making me feel very old, those students represent a sense of continuity of service. Every year I was on the board, we focused on helping EWU prepare for that freshman coming to Eastern, perhaps as the first in their family to attend college, unsure of what to expect.”

That perspective reflects Tanaka’s commitment and philosophy while serving on the board. He always knew the board was accountable, not only to the state and its taxpayers, but also to the families who place trust in the university to prepare their students for the rest of their lives.

“That is a huge responsibility, collectively for Eastern, and individually for each trustee and every employee at the university. I came to understand that the administration, faculty and staff at Eastern keenly felt this responsibility, and always directed their best efforts to achieve this lofty goal.”

Now retired from his position as the King County Administrative Officer, Tanaka was first appointed to the Eastern board in 2002 and finished his distinguished run this fall. During his tenure, he served in every position on the board, including chair.

He cites the hiring of two accomplished presidents as some of the most important board decisions during his service. President Rodolfo Arévalo helped steer the university through lean budget years after the recession. The current president, Dr. Mary Cullinan, is poised to start a comprehensive fundraising campaign and is focused on students having the academic programs and the support they need to be successful.

“I believe that the board made the right decision with each of these hires, matching the needs of the university at the time to the particular skills of each of the individuals we hired as presidents,” he said.  “And for that, the board of trustees should indeed be proud.”

Moving forward, Tanaka says Eastern has carved out a unique role in the state’s higher education landscape. He points to its position as the most affordable university and its diverse student body. It’s those underrepresented populations that Tanaka believes are key to Eastern’s continued success, and he challenges those students to utilize their energy and skills.

“Engage with the university, your fellow students, and the larger community. Get involved. Become leaders, both at Eastern, and back home in your own community,” he said. “A university education is a precious commodity that can and does forever change lives.”

And now that his life will change as his time at EWU ends, Tanaka knows what he will – and won’t – miss!

“Well, not the flights from Seattle to Spokane,” he said. “I estimate over the years I’ve taken over 100 round-trip flights. But I will miss the company of my friends on the board and at the university, and the sense of satisfaction derived from working together to improve the educational experiences of our students.”