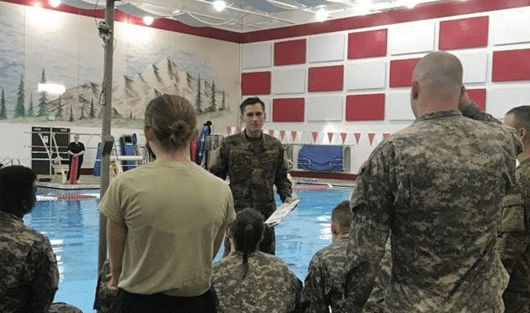 ROTC (Reserve Officer Training Corps) students from across the Pacific Northwest are traveling to Eastern Washington University this weekend to compete for an award held in high regard by the United States military.

The German Armed Forces Proficiency Badge is a decoration that can be awarded to soldiers of all ranks, provided they pass a series of rigorous tests meant to challenge physical endurance and military training.

Beginning at 7 a.m., Saturday, Nov. 17, these challenging tests are set to take place at various locations across EWU’s campus and consist of a 100-meter swim while dressed in combat uniform, a sprint test, flexed arm-hang, a 1,000-meter run and pistol qualification.

The two-day event concludes Sunday, beginning at 8 a.m. with a ruck march around campus, followed by an awards ceremony and pizza party. Those who meet the necessary point requirements for all tests will be awarded a bronze, silver or gold badge based on their scores.

“We have cadets who have transferred to Eastern for its ROTC program,” said Capt. Gregory Benjamin, assistant professor of military science. “This event is an opportunity to highlight what the ROTC program brings to the university and what the school does in return.”

Also in attendance will be Sgt. Maj. Ronald Schiller of the German army. With 30 years of experience overseeing the event, Schiller will be in control of the official testing.

This will be EWU’s first time hosting the competition. For those interested in witnessing the tests, the German Armed Forces Proficiency Badge event is free and open to the public.

Here is a full list of units visiting Eastern this weekend for the competition: