We understand your student will need help adjusting to college and need your input as a family on the resource to help them succeed as they learn and grow at Eastern. Here are some places you can visit to get involved in your student’s transition to college: 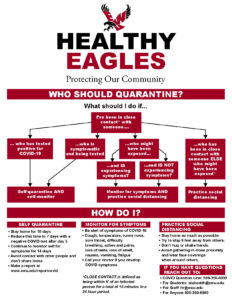 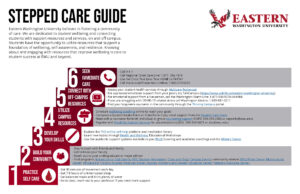 The cost to attend EWU is about $7,461 per year. Learn more about tuition and fees at EWU.

Yes, it is a requirement. However, there are exceptions. You can apply for an exception by completing the Housing Exception Request and providing the requested supporting documentation. You can find more information on the EWU Housing website.

For this question you can refer to EWU admissions web page.

There are jobs for students at EWU, students can log on EWU web page and follow the link ewu.joinhandshake.com, when students complete that FAFSA or WASFA make sure to click the box when they ask if you would like to receive a work-study award. You can find more information here.

Approximately four or five years depends on the number of credits required for the major they choose. You can find more information here.

EWU offers 90 areas of studies. To explore the 90 programs of major studies, you can refer to EWU web page and type Interactive Program Explorer. You can find more information here.

Due to the Family Educational Rights and Privacy Act (FERPA) university professors and staff are not allowed to disclose student information regarding grades or attendance. If parents or guardians would like access to this information, the student would need to complete and submit a Release of information form https://inside.ewu.edu/records-and-registration-forms/release-of-information/. I encourage parents and students to maintain open communication.

Students bounce back and forth to class, dining hall, dorm, meetings, library, sports, etc. all day long. They may get up early and stay up late to get it all done. It takes some getting used to.

The Chicana/o/x Studies Program has developed bilingual guided tours to family members, presented workshops with high school students and their parents, and we’ve been involved with admission events in which we’ve received frequently asked questions from parents. We have condensed those questions here and we hope these will be helpful to you.

EWU offers many ways to help you pay for school. Learn about scholarships, grants and more.

Learn about financial aid available to undocumented students or view our guide for on-campus resources.

Learn about EWU’s plans for fall 2020 and what they mean for you as a student.

Rooms or All House for Rent

Looking for apartments in Cheney? Click on each section to be directed to their websites or contact info.

If you don’t see your apartment listed, please contact us to add it to our list. Thank you.

The Chicana/o/x Studies Program Student Lounge was renovated Winter quarter of 2020, it offers a space for students to gather, interact with others, and study in a quiet and relaxed location. The Lounge offers comfortable couches and sofas, two study tables, two desktops with high-speed Wi-fi, and two printers. Maximum of 10 pages allowed to print. Additionally, we offer board games, lotion to help moisturize dry skin during cold weather, and a small lending library.

We ask that you respect this space by cleaning up after yourself and being mindful of others in the space. There are sanitizing wipes located at each table to wipe down your area before you leave and hand sanitizer available.

Further, into the office, we offer a fully equipped kitchen, filled with a functioning sink, oven, stove, microwave and fridge. We hold small pantry items that you are free to take with you. If you need further assistance or would like to rent out the space, please contact us at chstprogram@ewu.edu or call our office Monday – Friday 8 AM – 5 PM (PST) at 509.359.4857.

How to Use the Terminology

The words we use to identify ourselves and to identify others matter. These words reflect our identities, our beliefs, and our histories. As such it is important to understand what these words are and their origins. It is our hope that providing information on these terms will help others understand more about who we are and our communities.

Chicana/o/x was originally a slur used to identify Americans of Mexican descent and reflect them being of a lower social class. However, this term was reclaimed in the 1960’s & 70’s as part of the Chicano Movement to create a sense of community solidarity, ethnic pride, and political power. In more recent years the Chicana/o/x identity has continued to become less of an ethnic identity and more of a political stance representing a desire for change, political activism, and representation for our communities. The term has also moved away from its nationalist identity, which solely represented Mexican-Americans to attempting to embrace and include more Latin-American identities.

Hispanic is a term often used to identify people who trace their roots back to a primarily Spanish speaking country, examples being Mexico, Cuba, Puerto Rico, the Philippines and Spain. However, this category historically has not included people from Brazil, Indigenous Latin American communities, Afro descendants, or Asian descendants.

The difference between these two identities is that of culture versus language. Typically Latina/o/x is a cultural identifier that represents a person who is from or is descended from a country in Latin America, examples being; Mexico, Brazil, Chile, and Honduras.

This is in contrast to Hispanic which is connected to the primary language spoken in their country of origin or descent being Spanish. This includes origins such as Cuba, Puerto Rico, Spain, and the Philippines.

So this means many countries of origin and descent are both Latina/o/x and Hispanic. Places like, Mexico, Cuba, Puerto Rico, Honduras, and Chile. However, some countries are Latina/o/x and not Hispanic, such as Brazil as they primarily speak Portuguese and not Spanish. While others are Hispanic and not Latina/o/x, such as Spain and the Philippines, as they are not located in Latin America.

“Although there are certain similarities between the indigenous peoples of the Americas, the situation is different in each country, with different percentages of indigenous populations. The indigenous population of Latin America consists of approximately 50 million people, who belong to 500 different ethnic groups. The largest populations (in absolute and relative terms) are in Mexico, Guatemala, Peru and Bolivia.” – Martin de Dios, Affiliate researcher at the Center for Studdies for Human Development of Universidad de San Andres.

Much like their American Indian counterparts Indigenous populations of Latin America are vast and diverse, each with their own unique cultures, practices, languages, and histories. Because of this many Indigenous Latin American communities actively choose not to identify as Hispanic or Latina/o/x, as their cultures and identities existed before either category was created. While many communities have connections with Latina/o/x cultures, they often have a desire to remain distinct from them.

Afro-Latinos are people from Latin America or are of Latin American descent that are interwoven with African or black identities historically ingrained within Latin America. This includes Haitians, descendants of the Atlantic Slave Trade, and other black descended indigenous cultures.

Afro-Latina/o/x people reflect the complex and varied nature of race and identity among Latinos. A Pew Research Center survey of Latino adults shows that one-quarter of all U.S. Latinos self-identify as Afro-Latino, Afro-Caribbean or of African descent with roots in Latin America.

Latinx is used generally as a gender-neutral term for Latin Americans, but it has been especially embraced by members of Latina/o/x LGBTQ+ communities as a word to identify themselves as people of Latin descent possessing a gender identity outside the male/female identies.

Latinx was originally formed in as a word for those of Latin American descent who do not identify as being of the male or female gender or who simply don’t want to be identified by gender. Latinx purposefully breaks with Spanish’s gendered grammatical tradition. X signifies something unknown and is used in Latinx to connote unspecified gender.

Colorism is a practice of discrimination where those with lighter skin are treated more favorably than those with darker skin. This practice is a product of racism, in that it upholds the white standards of beauty and benefits white people in the institutions of oppression (media, medical world, etc.). A major effect of Colorism is the devaluing of Black, Indigenous, and darker skinned mixed individuals by society.